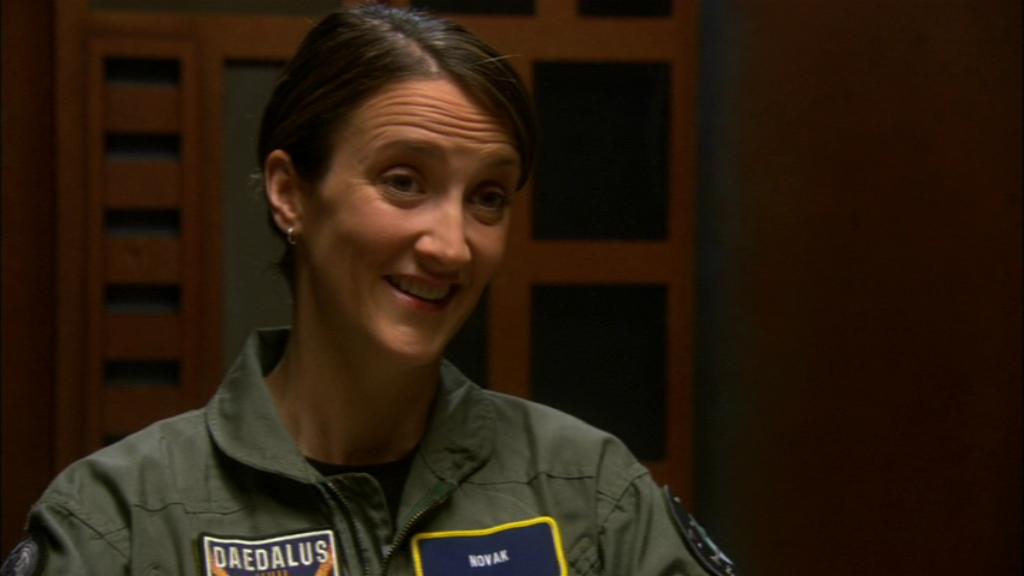 Engineer who turned down an offer to join the original expedition to Atlantis. She has an acute case of the hiccups when she's frightened, an annoyance that almost destroyed her PhD presentation.

Lindsay was aboard the Prometheus when it attempted to make a voyage to the Pegasus Galaxy to assess the expedition team's situation (No one had heard from them since their departure). She was one of the officers offloaded to a Goa'uld Al'kesh by Vala Mal Doran who intended to sell the Prometheus to a fellow arms dealer, Tenat. Eventually Daniel Jackson was successful in securing the ship and turning it around to pick up Novak and the others who were stranded. Prometheus did not make it to Atlantis.

Almost half a year later when the Earth ship Daedalus was completed Novak served as Engineer alongside the Asgard Hermiod. She occasionally frustrated the alien concerning matters relating to weapons deployment. But at least she had gotten over her hiccups.

It is not clear if Dr. Novak maintained her engineering post aboard the Daedalus or went to Atlantis to carry out her original plan.

Prometheus Unbound - Dr. Lindsey, General Hammond and a throng of military officers and scientists are abandoned when Vala Mal Doran arrives to commandeer the Prometheus.
The Siege, Part 3 - Dr. Novak finally makes it to Atlantis aboard the Earth ship Daedalus and assists in the destruction of three Wraith hive ships.
Critical Mass - When a Trust operative plants a bomb in Atlantis Dr. Novak is questioned by Dr. Weir, and she suggests that Dr. Kavanagh was acting peculiar aboard the Daedalus.