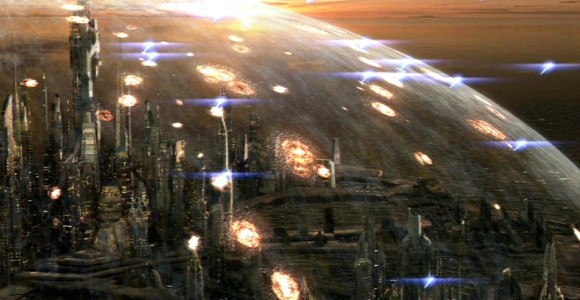 The Daedalus arrives to defend Atlantis from the Wraith onslaught, but it may not be enough when the team discovers that an even larger armada is on the way.

Lt. Aiden Ford and his team open fire on the group of Wraith that have surrounded them on a city balcony ("The Siege, Part 2"). Both sides effectively neutralize each other until only Ford and a Wraith warrior are left standing. It takes him into its clutches and begins to feed on his life force, but a downed soldier releases a grenade at the Wraith, forcing both it and Ford to plummet over the balcony and into the ocean.

Meanwhile, Sheppard steers his Puddle Jumper into the launch bay of one of the attacking hive ships, and moments later it is destroyed. Atlantis detects the presence of another ship, and soon they receive a communiqué from Sheppard – who has survived the blast. The Earth ship Daedalus has arrived and used its Asgard transporter to beam Sheppard to their ship. Its commander, Colonel Steven Caldwell, orders their energized Z.P.M. to be transported to Atlantis so McKay can re-engage the city's powerful shields. The Daedalus enters battle with the Wraith.

McKay is assigned two soldiers to ensure that he reaches the Z.P.M. chamber, but en route they are attacked by two Wraith warriors. McKay is left alone, face-to-face with a Wraith – but Teyla eliminates them and offers to protect him the rest of the way.

Aboard the Daedalus, conventional weapons are unable to reach the hive ships before they are intercepted. Colonel Caldwell orders Dr. Novak and the Daedalus's resident Asgard engineer, Hermiod, to use Asgard technology to beam warheads into the hive ships. The Asgard expressly prohibited the use of their technology in this manner, but since Hermiod is at the controls, he consents to bypass the restriction and transport the weapon anyway.

The third Wraith hive ship is destroyed and the Wraith cruisers flee into hyperspace. The remaining Darts regroup to make a kamikaze run down to Atlantis at ballistic speeds, but McKay applies the Z.P.M. to the Atlantis generators in time to raise the shield, protecting the city from the collisions.

Major Sheppard returns to Atlantis with reinforcements to clean up the remaining Wraith on the ground. Colonel Everett requests to speak with him in the medical bay. It is clear that a Wraith had begun to feed on him, as he has aged some 20 years in appearance. He now admits that Sheppard made the right decision in killing Colonel Sumner, who had been in the hungry clutches of the Wraith Keeper. Everett wishes that Sheppard had been there for him, too.

With Ford still missing, Sheppard orders Dr. Zelenka to extend the sensors to search beyond the city's perimeter. Ford's signal is located, and the Daedalus transports him to the infirmary – with the Wraith still attached to him. Dr. Beckett reports that he was lying face-down in the freezing water for over an hour. The sudden death of the Wraith pumped the complete supply of its life-sustaining enzyme (which Wraith inject into their prey to boost the person's strength, in order to keep him alive longer and get more out of him) into Ford's body, allowing him to survive. Now Ford has become dependent on the enzyme, but Beckett believes he can gradually wean him off of it.

With Atlantis's long-range sensors back online, 12 more hive ships are detected on the way. They will be in range in 36 hours. Weir orders Sheppard and the Daedalus to intercept them at their next hyperspace stop. With the element of surprise and an armory of nuclear warheads, they are able to destroy two of the ships before the Wraith find a way to block the Asgard beams. Ten capital ships remain. Outgunned, the Daedalus makes a run for Atlantis.

Ford returns to Atlantis's command center hoping to resume his duties, but Dr. Beckett insists that he be taken back to the infirmary. In a fit of rage, Ford grabs Beckett by the neck and pins him to the wall. He soon realizes that he needs to be under medical supervision. Teyla escorts him back. They soon determine the enzyme has begun to alter his brain chemistry; but Ford hears every word as they make plans to wean him from the drug and reinforce security.

The Daedalus lands on Atlantis's east pier to undergo repairs under the protection of the city's shields, just as the hive ships emerge from hyperspace and begin bombarding the city with weapons fire. Meanwhile, Ford escapes from the infirmary with the supply of Wraith enzyme Beckett has harvested from Wraith corpses to help wean the Lieutenant off his addiction. The enzyme acts like a steroid, making Ford stronger and more aggressive.

The group is assembled to ascertain the situation, and they realize that the Wraith won't stop coming even if this fleet could be destroyed. But if the Wraith believed Atlantis had been destroyed, they would leave the planet alone. McKay proposes the Daedalus detonate a nuclear warhead right above the city's shields. Then a Puddle Jumper's cloaking shield will replace the shield of Atlantis; while the Wraith's sensors are blinded from the explosion, the cloak will engage. The Wraith will believe the city has been annihilated. Teyla will further reinforce this ploy by linking to the Wraith telepathically, sharing their intentions to destroy the city.

The plan is put in motion, and Teyla is successful in communicating their fake plans. The ships cease fire. The Daedalus launches the weapon; it detonates, and Atlantis cloaks.

Meanwhile, Sheppard learns of Ford's situation and tracks him down. The Lieutenant doesn't believe that the others are trying to help him, and thinks that they are afraid of him and only want to change him back. Ford doesn't even slow down when Sheppard shoots him with a Wraith stunner, and escapes in a transport chamber. He punches out Zelenka and commandeers a Puddle Jumper using it to activate the Stargate and depart Atlantis.

The Wraith fleet breaks orbit, convinced that Atlantis has been destroyed. The plan was successful and, for the time being, the city is safe.