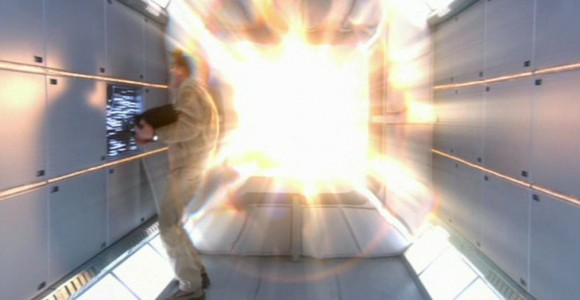 McKay puts the team at risk when he tries to perfect unfinished Ancient technology that wiped out a civilization. Ronon Dex discovers that he is not the lone survivor from his world.

The Atlantis team visits a planet mentioned in the Ancient database: Doranda, fabled to be a world friendly to the Ancients, is now a worlds that appears to have suffered a post-nuclear holocaust. A wrecked Wraith armada orbits the planet. On the surface, an Ancient outpost sits, untouched.

Dr. McKay is not yet able to determine the exact purpose of the base, but it is obvious that it is the only structure that survived. Colonel Sheppard believes it to be a ground equivalent to the Ancient satellite they once found ("The Defiant One"). However, dead bodies liter the corridors of the installation.

Back on Atlantis, McKay convinces Dr. Weir to allow him to return with a team to the base. He and Dr. Zelenka begin to deduce a theory, but they do not wish to spread it to the others yet. Meanwhile, Ronon and Teyla travel to Belkan to trade for a special disease-resistant strain of flax seed which would double the output of crops on the mainland. She is prepared to trade Athosian workers for the strain.

Hendon's offer is unreasonable and would only turn the Athosian people into slaves. When he gets up to leave, Ronon threatens him with a knife to force his hand. Later, Teyla confronts him about the delicacies of negotiation. When Ronon departs, the Belkan Mattas returns to Teyla and learns that Dex is of Sateda, a world destroyed by the Wraith. "He is not the only survivor," says Mattas, indicating that there is another Satedan refugee in the village.

Ronon reunites with Solen Sincha, a Satedan who served in his regiment. Sincha tells him that more than three hundred civilians were saved following the Wraith's culling on Sateda. Ronon isn't alone. Not only that, but Kell, Ronon's Task Master, has survived as well – and he occasionally trades weapons with the Belkans.

McKay and Zelenka explain Project Arcturus, the failed experiment, to Weir and Colonel Caldwell. Arcturus would have brought together a power source the equivalent of 25 Zero Point Modules when fully powered. Instead of obtaining zero-point energy from a small universe, Arcturus would draw energy from our universe. But for some reason it failed, and the Ancient scientists sacrificed their lives in order to deactivate it. McKay believes because they were rushed to complete the weapon and end the hundred-year Wraith war they hurried themselves to their deaths.

Rodney and Radek are confident they can complete the Ancients' work on the Dorandan homeworld. But during the next test, the radiation begins to spin out of control. Collins is ordered into the command access tube to manually boost more power to the field, but once he is inside the radiation spikes and kills him.

Despite the fact that one of McKay's officers lies in the morgue, he is intent on succeeding. Rodney believes the problem is in the automatic containment protocols. If the field strength is manually adjusted, he believes it will solve the problem. Asking Sheppard to trust him, the Colonel takes this information to Weir, and with Caldwell's help she is swayed.

But Zelenka believes he knows why the Ancients abandoned the technology. Attempting to extract energy from our own space-time is impossible. Eventually the matrix within the field of the weapon becomes inherently unpredictable, and an overload is the end result at no matter what power level. McKay refuses to listen, and as predicted the energy field spikes.

Back on Belkan, Ronon has used Teyla's connections with the Belkans to arrange a meeting with Kell, who has arrived to trade. When Dex reveals himself, Kell gets one word out before Ronon kills him with his gun. When Kell's guards pull their weapons on Ronon, Dex reminds them of what Kell stood for. Teyla, enraged, learns the truth. Kell sent thousands of Satedans to their deaths just to save himself and his own family. He was a coward and traitor. Teyla says she may have done the same, but tells Ronon next time she will not be so forgiving if her friendship is misused again.

Sheppard convinces McKay to abandon the station before they are killed in the impending overload. The weapon continues to discharge fire in order to bleed off the overload, but eventually it will be overcome. As the Jumper flies toward the Stargate in deep space the Daedalus arrives to provide cover so they are not shot down. Then the Daedalus enters hyperspace, just as most of the solar system is destroyed in the detonation.

McKay occupies his time with apologies to his colleagues for his pompous arrogance, but saves Sheppard for last for fear that the Colonel will never trust in him again. However, John promises he will eventually earn it back.