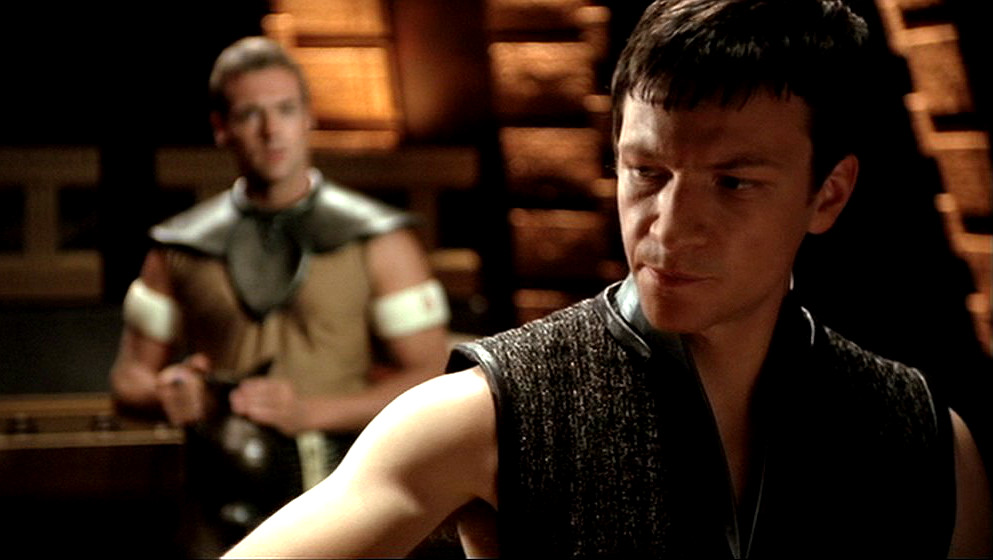 The most trusted slave of a Goa'uld. Lo'taurs are most often humans, and take many different appearances, usually tailored to the god they serve. They are fit and often possess an appealing physical appearance. It is believed that Lo'taurs are typically human so if their lord's body becomes injured or is in a life-threatening situation, the symbiote can transfer into the Lo'taur to safety. To ensure loyalty, Lo'taurs are often raised from birth for the role. They believe serving their god in such a position is a privilege, and few are willing to risk damaging their relationship with their god, even if they know the truth about the Goa'uld as parasites. Still, they are taught that implantation by a Goa'uld is followed by endless pleasure -- though only reports of pain and torture have come from those unfortunate enough to discover it.

Daniel Jackson poses as Jarren, lo'taur to Yu the Great. From "Last Stand."

Some Goa'uld may have more than Lo'taur at once. If in a position prestigious enough, Goa'uld such as Apophis and Seth have been seen with multiple servants, all of whom may perform the tasks of a Lo'taur. Other Goa'uld such as Anubis appear to have no need for a Lo'taur, though this has not been confirmed.

Baal himself may have had multiple Lo'taurs. A young boy who had served his lord for most (if not all) of his life was in Baal's inner circle, yet mere months later another Lo'taur of the Canaanite god, Shayla, encountered the Tok'ra Kanan and betrayed her master to escape. She had been recaptured for a time, but Baal refused to kill her for fear that she had forfeited crucial information.

For a time, Yu's Lo'taur was Jarren.

Summit - At the request of the Tok'ra, Dr. Daniel Jackson infiltrates Yu's inner circle by posing as his Lo'taur.
Last Stand - Jackson, still posing as Jarren, interacts with other Lo'taurs of the Goa'uld System Lords and discovers that they have been brainwashed from childhood.
Abyss - SG-1 learns that the Tok'ra Kanan, now influenced by the personality of Jack O'Neill, returned to Baa's outpost to retrieve Baal's Lo’taur, Shayla.