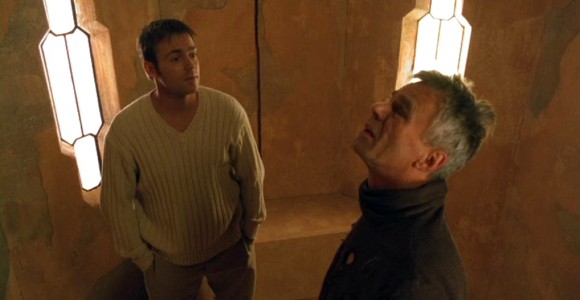 O'Neill is captured and tortured by the Goa'uld System Lord Baal, and must rely on an old friend to survive.

An unknown figure hurries through the dark woods of an alien world. He leads a young woman, afraid, as they are pursued by a squadron of Jaffa warriors. She stumbles, and he tells her to wait in hiding until the Stargate is opened. He makes his way to the gate and begins to dial, but is struck in the back by a staff weapon blast.

The man falls to the cold, muddy ground, and Jaffa surround him. With no way of escape, a symbiote comes out of his mouth and onto the ground. The man collapses and rolls over – it is Jack O'Neill.

He is revived with a Goa'uld sarcophagus, and brought before his captor: the Goa'uld System Lord Baal. A heavy-gravity field pins him against the wall in Baal's chamber, as the System Lord slowly tortures him for information. Who is he? Why did he infiltrate Baal's top secret base and steal his personal slave? What is the name of the Tok'ra that possessed him? He dangles a menacing knife into the gravity field, toward Jack.

Jack can't answer any of his questions, and despite his condition takes a few humorous jabs at the mighty System Lord. Baal releases the knife and kills him.

On Earth, the Tok'ra Thoran arrives with word of O'Neill's fate. His life was saved from a mysterious virus when he was blended with the Tok'ra Kanan ("Frozen"). But a few days ago, O'Neill/Kanan walked out of the Tok'ra base and through the Stargate without explanation. The Tok'ra blame O'Neill; SG-1 thinks Kanan seized control of his host and used him. Nevertheless, they have no idea where he is.

O'Neill wakes up inside the Goa'uld sarcophagus once again, and is taken to a prison cell. The cell has no door or bars; instead, at the flip of a switch, the gravity in the deep cell shifts, and Jack falls to the back wall – which has now become the floor. He is alone in the deep pit, and helpless.

Back at the S.G.C., SG-1 asks Thoran to provide Kanan's recent mission reports, in the hopes of figuring out where Colonel O'Neill may have gone. He refuses, despite the treaty between Earth and the Tok'ra that allows for such exchange of information. General Hammond refuses to allow him to return to the Tok'ra until he agrees.

In Baal's prison cell, Jack is greeted by someone he never expected to see again: Daniel Jackson. His friend and former teammate has ascended to a higher plane of existence ("Meridian"), and though he is a powerful being he has shown himself now only in order to comfort O'Neill. Jack pleads with Daniel to help him escape, but his friend insists that he cannot interfere. As an ascended being, he is forbidden to use his powers in that way – even when he's sure it's the right thing to do, even when it concerns the people he cares about.

Jack is taken before Baal again. The Goa'uld tortures him with acid, demanding to know the name of his Tok'ra symbiote. O'Neill finally remembers it, and tells him. But he cannot remember anything about their mission, and Baal kills him again.

Back in Jack's cell, Daniel offers him a way out. Baal is going to keep torturing him to death and reviving him, over and over again. Each time he goes into the sarcophagus, it steals away a part of his soul. SG-1 doesn't even know where Jack is – and even if they did, it's a fortress, so they'd never be able to rescue him.

Jack's only way out is to ascend, like Daniel has. All he has to do is release his burden. O'Neill isn't willing to let go of his life and try to ascend, and instead asks Daniel to make sure Baal can't revive him again – to kill him for good. Daniel refuses, and the Jaffa come for him again.

Thoran finally agrees to share Kanan's mission reports with SG-1, and the team searches the records for any hint about where O'Neill might have gone. They learn that on one recent mission, Kanan used Baal's most trusted personal slave – a woman – in order to access secret information. Why would the woman risk everything to help him, unless she became personally involved with Kanan?

Jack, the team reasons, must have subconsciously influenced Kanan. The moment they were blended, the symbiote would have been confronted by everything that makes the Colonel who he is – including the deeply-rooted conviction not to leave anyone behind. Kanan had gone back to Baal's fortress to rescue her.

"He loved her," Jack confesses to Daniel after another torture session. And if Daniel lets him go back in there, he's going to crack. He's going to tell Baal everything, and then the Goa'uld is going to do to her what he's doing to O'Neill.

The team knows of no way to free O'Neill from Baal's clutches; General Hammond refuses to allow them to attempt it themselves. But Teal'c has a revelation, and convinced Hammond to agree to a daring plan: they deliver information about the location of Baal's secret base to Yu, a rival System Lord. Yu has the power to attack the base with his powerful warships, giving Jack a chance to escape.

Jack wakes up in his cell to find Daniel once again. Daniel acknowledges to his friend that Jack was right – there's always another way. Sam, Teal'c and Jonas thought of something.

Yu's attack begins at that moment, and the base loses power. The gravity field is deactivated, giving the Colonel an opportunity to escape. It is Jack's fighting chance, and Daniel tells him that if anyone can make it out, it's Jack. He overpowers a Jaffa on his way out, and finds the slave woman – Shayla – in another cell. He takes her with him.

He makes it back to Earth, where his friends attend to him in the infirmary. Though none of the others can see him, Daniel shows up one last time to say goodbye to Jack. His withdrawal from sarcophagus addiction will be hard ("Need"), but he knows Jack can handle it. But now, Daniel must leave – he has his journey, and Jack has his. Daniel is suddenly gone, and O'Neill whispers, "Thank you."