Difference between revisions of "Nirrti" 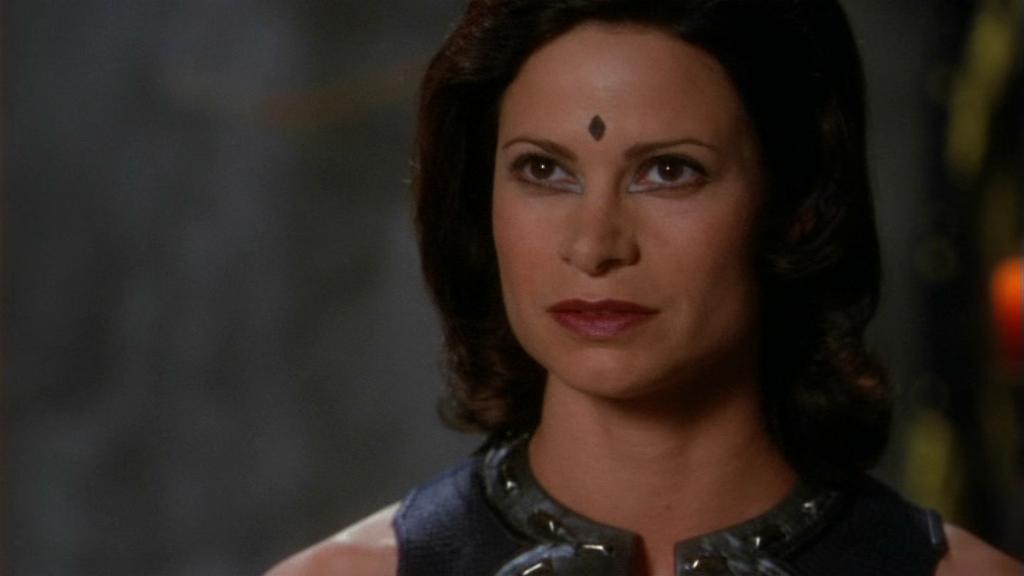 Treacherous and amoral, the Goa'uld Nirrti was regarded as a goddess of darkness and destruction in ancient Hindu culture. She was once a powerful System Lord, but was cast out by the other System Lords when she nearly threw their relationship with the Asgard into chaos by making a play for Cronus' territory. During a summit at the S.G.C. Nirrti used advanced phase-shift technology to become invisible, allowing her to try and kill Cronus and throw the blame on Teal'c. Instead, Nirrti was apprehended.

Nirrti is believed to be responsible for wiping out all but one of the inhabitants of the planet designated P8X-987, plus four members of the S.G.C. On this planet, Hanka, Nirrti had spent years conducting genetic experiments on the human population in an attempt to engineer a hok'taur -- a genetically advanced human host. She believed that taking a host with abilities like telekinesis and telepathy would make her more powerful than ever.

When the S.G.C. made contact with Hanka, Nirrti wiped them out for fear that the other System Lords would discover her experiments. She implanted a naquadah bomb within the lone survivor, a young girl named Cassandra, in a failed attempt to blow up Earth's Stargate.

After her betrayal of the System Lords, Nirrti was held captive by Cronus, whom she had attempted to murder. But when Cronus was killed, Nirrti found her freedom -- and began conducting her experiments again on another world. She stumbled upon a piece of the Ancients' technology, capable of reading and altering a person's genetic code. She experimented on the local population to learn how it worked, and even captured two SG teams from Earth (including SG-1) and used it on them.

When SG-1 convinced her test subjects that she was not a god, but was just using them, they used their new abilities to kill her. Nirrti was finally destroyed by the very thing she was trying to create for her own purposes.

Fair Game - The System Lords Nirrti, Cronus and Yu arrive on Earth to negotiate adding it to the Asgard Protected Planets Treaty -- but Nirrti uses her newly-acquired phase-shifting technology to attack Cronus and sabotage the summit.
Rite of Passage - Having escaped Cronus' prison, Nirrti follows SG-1 back to Earth and attempts to gain access to young Cassandra, on whom she had done genetic experiments. She is captured, but eventually released in exchange for Cassie's life.
Metamorphosis - A Russian team from the S.G.C. finds a planet where Nirrti is using a piece of Ancient technology to experiment on the local population, giving them super-human abilities. SG-1 investigates, and Nirrti is killed by her victims when they learn what she is really doing.
Stargate: Continuum - In an altered timeline, Nirrti is still alive and in the service of Baal, who has used his knowledge of the future to become the most powerful of the System Lords.