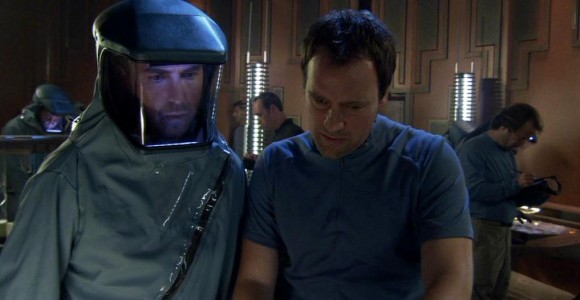 Nearly a third of Atlantis's residents are infected with a deadly virus that causes hallucinations and death, forcing a lockdown of the city.

"Hot Zone" opens up with a big nod to continuity following "The Storm" as McKay leads a team to survey the damage the massive hurricane did to one part of the city. All seems to be going well (even a compliment from McKay) until they find two of the team members, inexplicably seeing things and dying right in front of their eyes. Maybe the title of the episode gives away too much, but I can already tell there are going to be haz-mat suits involved.

Fearing the worst, Weir asks the city residents to quarantine themselves. Nobody is to move until they've figured out what's happened. Honestly, I wonder how well kept-to those orders would be (disregarding Sheppard and Teyla, which is an entirely different story). Major Sheppard is practicing with Teyla the fine art of stick fighting, but he forgot to bring his radio, so Weir orders him to stay where he is. Sheppard, never one for a chain of command in extreme circumstances (Peterson is overriding the locks protecting the main section of the city), orders Bates to open the gym doors.

But while Sheppard's place in the chain of command is above Bates, it's not above Weir.

Last week, I talked about the fact that not every team member is super-heroic is something different from the norm. But here, the anti-heroics seem to take a turn for the downright cowardly when Peterson makes a run for it away from the lab.

Weir is disturbed by the fact that Bates followed Sheppard's order over her own -- and she should be. Bates tries to apologize after the fact, but she responds with, "Doesn't really matter now, does it?"

Are Sheppard's actions necessary? Part of me wants to say yes, that if he hadn't had made that first step of breaking the quarantine more people might have died. He does save them in the end with the ingenious naquadah reactor solution, but the city showed that it could protect itself (and eventually would have protected the core of the city had Peterson gotten any further). While Sheppard does a lot to help the situation, half of it is in response to something that happened because of his initial action.

That argument from hindsight is ultimately a wash, and we are back to the problem with the expedition's chain of command.

Without a distinction of who is in charge, especially in Atlantis's situation, who ends up making the decisions is incredibly important. Add in the fact that the expedition doesn't necessary play by Earth's rules (breaking the Geneva Convention in "Poisoning the Well," for example), and what happens is all that more disturbing. When Weir asks Sheppard at the end of the episode if he trusts her, his reply is not all that certain. This lack of trust between the two leaders creates a serious problem in this episode, and opens up the possibility for more internal problems in Atlantis in the future.

While "Hot Zone" is, in some ways, another week, another brush with death for McKay, the scene where he thinks he is about to die is one of the best of the episode. For any other character, a goodbye soliloquy would have been cheesy; but David Hewlett pulls it off with McKay's last minute fabrications surrounding his death. Certain doom sure does manifest itself in strange ways with this character.

We also get the first look at the Atlantis dining hall. This addition to the set is great, although if we get to see the dining hall, it makes me wonder: Where are the bathrooms? (I ask in complete seriousness.)

While McKay figures out that the virus is nanite-based, and doesn't kill anyone with the Ancient gene, there is still a lost of mystery surrounding the virus. The illusions bear a resemblance to the images the Wraith fooled team members into seeing ("Rising, Part 2"), but the Wraith are ruled out at the end of the episode as the virus's creators.

This is fine, but the element that is driving this episode -- the mystery of the virus -- seems to just be dropped. This opens the possibility for yet another race of aliens to contend with, although something tells me that we won't be seeing the makers of the nanite virus anytime soon.

"Hot Zone" is a good episode, but the only thing that really stands out are the burgeoning issues of trust and chain of command in Atlantis. Maybe the creators of the virus will be randomly introduced two seasons from now, but for "Hot Zone," the details of the contagion are dropped at the very end of the episode to make way for the conflict between the characters. Not that that's a bad thing, but I felt as if the virus story was suddenly tossed aside, with only a half-promise that there might be some answers later on.