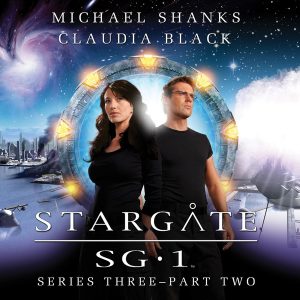 After being kidnapped Daniel and Vala find themselves up against an advanced threat that could rewrite the very foundations of the universe.

Abducted by some less than savoury characters, Daniel Jackson and Vala Mal Doran are caught up in the investigation of a strange object in space. What does it do, who created it and why does it seem so familiar?

As they discover more about the object, Daniel and Vala realise that they're taking on an enormously technologically advanced threat bent on rewriting the very foundations of the universe. Can they stop the disaster that’s about to occur, or is life as they know it about to change forever?

A visit to Vala's "friend" Keto turns into a family reunion when she and Daniel are abducted by Vala's former associate Zoder and the crew of his ship, The Capital Venture.

Zoder has discovered a vast construct in space and plans to strip it of any assets it may contain. But he needs Daniel and Vala's expertise to complete the mission safely. Unfortunately, the group is about to stumble upon a secret which someone is murderously keen to keep quiet ...

A series of thefts from a planet's library piques Daniel's interest, so he and Vala investigate. With some help from Keto, the pair go undercover in an attempt to find out why the treasures are being taken.

But in a spaceport where the locals find it difficult to trust anyone, are they wandering calmly in front of the barrel of a gun?

While visiting the planet Gezegen, Daniel starts to notice disparities between what he thought he knew and the world around him.

Seeking answers, Daniel gets Vala to contact the Asgard, believing they will have some insight into the changing reality. But once Daniel and Vala discover the full extent of the problem, will they be able to avert the end of the universe as they know it?

And, more importantly, will they want to?