The audio commentary for Continuum features writer and producer Brad Wright (who co-created Stargate SG-1 with Jonathan Glassner in 1997), and director Martin Wood (who has too many episodes of Stargate to his credit to count). These two have a terrific working relationship and are obviously good friends. They are completely relaxed and genuinely funny with each other, talking about production details like what went into key shots, as well as story details regarding what was necessary to move the film along. They also help to illustrate just how different the movie is from a television episode. As fun as it is to hear an actor on a commentary track, it might have been one voice too many here — Wright and Wood never run out of things to say.

Often times an audio commentary will end up focusing entirely on production issues, or ignore them entirely to talk about the story and the actors. Continuum‘s commentary perfectly blends the best of both worlds, revealing fascinating facts such as: 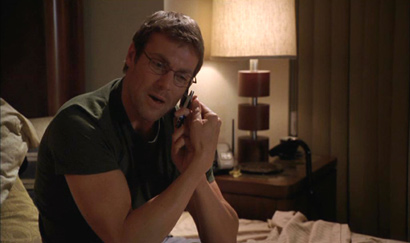 Daniel calls Dr. Jackson to try and encourage him. 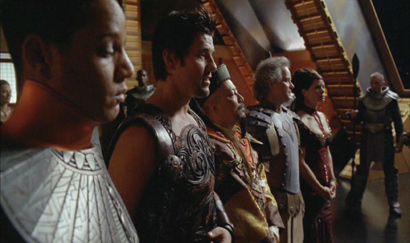 The System Lords Ra, Camulus, Yu, Cronus, and Nirrti reunite to give Continuum a bigger feel.

Brad Wright and Martin Wood are two of our favorite people working in the entertainment industry today. Watch Continuum, listen to GateWorld’s 2008 interviews with both men, and then listen to the movie commentary and you’ll discover why. They are not only tremendously good at what they do, they not only have an affinity for the rich, historical depth of the Stargate mythology — but they are genuinely nice and funny. What is more, they get excited when fans notice the little things they include — the little details like “Langford” being stamped on the Stargate’s shipping crate.

Without blowing things out of proportion, the audio commentary for Stargate: Continuum is one of the best we’ve heard. It’s continually interesting, it’s funny, and it is entertaining in its own right.