Fans who come to the film to see Jack O’Neill again won’t be disappointed, if they come with proper expectations. “Special Appearance By” is a fitting screen credit, since Jack is present in much more than a cameo, but does not star or drive the story himself. Richard Dean Anderson largely checked out of SG-1 in his final year, and many of his return guest appearances haven’t been much to speak of. But in Continuum he is Classic Jack — funny, sarcastic, and deadly serious at just the right moment.

Hopefully those who are new to Stargate will find these sci-fi characters interesting and emotionally compelling. For long-time fans, there is so much history between them that we feel the depth of every line of dialogue. Sam tries to get a hold of herself in the middle of a crisis, after Jack’s death. When Daniel is injured in the Arctic and cannot proceed with Sam and Cameron, he convinces them to leave him behind. As the frozen wind blows and Carter looks helplessly at her friend, he simply says, “Bye.” It is a moment powerful in its simplicity, and nothing more needs to be said between these two.

… until the two leave, and Daniel follows up with: “Oh, shit.”

That’s another element of Continuum that makes it feel so new and compelling — not the profanity, but the palpable sense that SG-1 just might not get out of this one. Stranded in the Arctic, facing former friends who don’t believe them or don’t want them to restore the timeline, forced to live new lives under the radar and away from each other, the three friends simply have no options. There is no Stargate, no allies, no way off-world, and no imminent threat to the planet. They can do nothing but go forward with their new and solitary lives.

As Cameron says to the others as this realization falls on them, “It’s been a pleasure. It really has.” 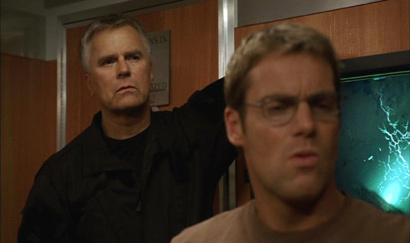 Daniel and the team have a hard time convincing Colonel O’Neill that they are not crazy. 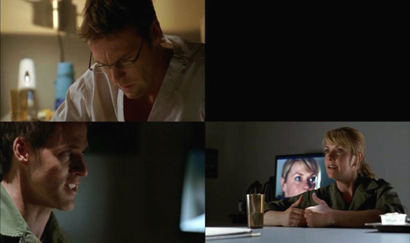 A split-screen explanation of the Stargate program
is another unique choice for Stargate.

With the inevitable arrival of a Goa’uld scout ship, of course, the movie dives into its action-packed second half. Having consolidated his power base among the System Lords (still alive and kicking, without SG-1 to take them out), Baal is ready to rule the Earth. It’s a ton of fun to see all the System Lords back, and to see Teal’c pressed into service as Baal’s First Prime.

Also back is President Henry Hayes (William Devane) and General Hammond (Don S. Davis, in his final Stargate performance), who send Cameron, Daniel, and Sam on a Hail Mary mission to retrieve the Z.P.M. power source to use the Ancient defense platform buried in the ice of Antarctica (“Lost City”). Baal detects the Antarctic digging project and quickly puts a stop to it, sealing Earth’s fate. Even SG-1 can’t save this reality any more.

There is a terrific attention to detail, with extras inserted for the benefit of long-term fans. The crate in which the Stargate is being transported in 1939 is stamped with the name “LANGFORD.” And in the absense of the Stargate program, Sam Carter realized her dream of becoming an astronaut (“Secrets”).

The film is a “one-off” in that most of what is seen on screen does not ultimately last when the timeline is restored. Daniel loses a leg? Reset. Most of SG-1 is killed? Reset again. (We do need them around to make more movies, after all!) In many ways this is a good thing, as it allows us to explore the possibilities for these characters — much like daydreams. But ultimately, the advancing of the character’s stories in this film proves mostly fruitless. As with “Moebius,” it would have been nice if the team retained knowledge of this experience in some form — but then it is such good fun killing off your regulars. The last image of the film, however, does show that one character at least knows that something has happened. 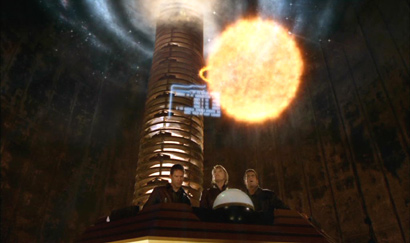 SG-1 hunts for a solution … moments before enemy soldiers arrive. 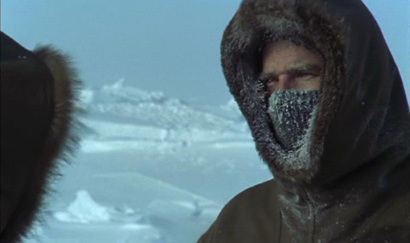 Cameron Mitchell fights for his life in the frigid Arctic.

In regard to Baal, however, the change does live on. Cliff Simon’s character finally gets the conclusion fans have been waiting for. Baal is perhaps the longest-lasting villain of the Stargate franchise, with the possible exception of Robert Kinsey. Continuum gives Baal a beautiful resolution.

In addition to the massive Goa’uld fleet in Earth’s orbit, the film has plenty of fantastic visuals. In the F-15 combat sequence it becomes clear that the visual effects are truly feature film quality, despite Continuum‘s humble budget of around $7 million.

Stargate: Continuum is so far ahead of the television series that it sets a new standard for story-telling in the Stargate universe. While it’s certainly easier to tell such a story with a bigger budget and a longer, looser time limit, writer Brad Wright also demonstrates the sort of character moments that can and should be done — and the sort of risks that can and must be taken.

Ultimately, the film is so damn good because it perfectly mixes what fans know and love — SG-1, Jack O’Neill, Goa’uld motherships, System Lords, staff weapon battles, Russians, time travel — with what is brand new. The Achilles, the Arctic, the frozen ship, the split screen, Daniel’s attempt to reach out to his alternate self, the F-15 / Mig / Death Glider dogfight — even the lighting and direction — there is so much here that has never been seen in Stargate that makes Continuum familiar, yet utterly original.

NEXT: The Score and Audio / Video