Beware of some SPOILERS for Stargate: Continuum in the review below. For a mostly spoiler-free review of the film (but not specifically the DVD release), read GateWorld’s pre-review instead.

Comparisons between Stargate: Continuum and the television series are inevitable, as well as between this film and Ark of Truth. Does the movie break new ground while retaining Stargate’s well-worn sensibilities? Does it duplicate past story ideas, such as “Moebius,” too closely? Is it accessible to new viewers? 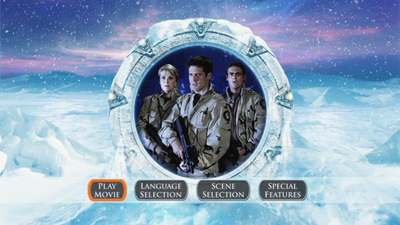 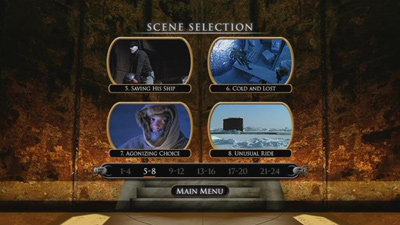 Viewers will want to get past the DVD menus in a hurry to get to the good stuff. The menus are flat and without any animation, and the main menu in particular (above) feels rather out of place for this film. The movie’s title is even entirely absent. The sooner MGM gets rid of this thick, mis-proportioned illustration of the Stargate, the better. If you’d like to dwell a moment to enjoy a segment from Joel Goldsmith’s score, you might want to close your eyes — or just start the film, since the same piece of music is at the beginning anyway.

For those who read GateWorld’s pre-review in April (we were able to see the film on the big screen, at the crew’s own screening), it will come as no surprise that we are wildly enthusiastic about Stargate: Continuum. In short: the movie has the perfect blend of the familiar and the new, with homages to SG-1’s 10-year run sprinkled into a compelling and original take on time travel.

Stargate: Continuum is a great movie. More than that, it is one of the best SG-1 stories ever.

That’s a bold thing to say, of course. But while fans of the series will always debate over which seasons and storylines are better than others, it’s amazing that the same episode titles tend to emerge when listing SG-1’s very best: “Heroes,” “Lost City,” “Abyss,” “Jolinar’s Memories” and “The Devil You Know,” “There But For the Grace of God,” “The Fifth Race.” Some episodes just seem to be universally loved.

Continuum deserves to be in their company.