Well, Joel Goldsmith has done it again. Where The Ark of Truth allowed the composer to explore more recent themes from the SG-1 universe, Continuum in many ways revisits the good old days of the franchise — while simultaneously introducing new themes which enhance the overall experience. The score is conscious of the fact that new viewers will have some well-developed themes to listen to, while at the same time revisiting themes even as far back as “Children of the Gods.” A veteran Stargate watcher and keen listener will deduce both paradigms.

While some moments in the film deliver scenes where it’s just the actor on the screen and Joel working side by side to bring forth the scene, there are others where it feels the composer was shoved in the back of the room. When the bombs start to fall and the planes prepare to leap into high speed the music, sound effects, and dialogue fight so much that none are truly discernible. We’ve seen the film three times and still have not understood what the voice over the F-15’s radio is saying. Fortunately, this distraction only occurs once in the movie, and there are other moments where dialogue is wisely suppressed to allow room for the score to take over.

The longer format and higher budget of the SG-1 movies have clearly allowed Goldsmith to break out of the TV mold, creating rich new compositions that ought to send fans rushing out for the soundtrack. This music is terrific. 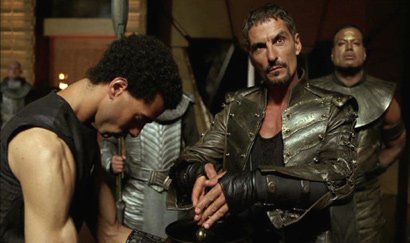 “There is a god standing here with wet hands!”
Baal is absolutely in charge in his altered timeline. 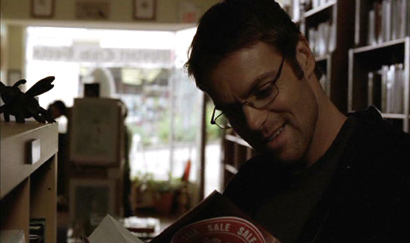 Daniel finds a book written by his alternate self, but has no one with whom to share the joke.

Continuum and its visuals hold up under great scrutiny. The film achieves stratospheric success in the visual effects department despite its humble budget, and these images remain very real no matter what size screen you have. In some respects, many of the visual effects are more realistic the bigger the screen you own. The 35mm filming quality lends itself to a more theatrical experience. Blacks are deep and true, and explosions are tweaked to the most satisfying contrast levels.

Our only complaint is the use of unpolished stock footage in one or two shots of the film. Though they are designed to allow the story to progress, one may notice that they are not cut from the same cloth as the rest of the movie and are slightly out of place.

Breathtaking digital surround sound is used to create the mix for Continuum, and maintain the movie’s scale. Jets and submarines are allowed to fulfill their true potential for anyone with a decent bass. One of our favorite moments is a wide shot viewing the side of the Achilles, where a staff blast shoots across half the ship and strikes a sailor to the ground. The sound of the plasma whizzes by from the left to right side of the surround system.

It doesn’t take a lot to have better sound and visuals than what Stargate fans are used to watching on television. Unless you are a regular HD television viewer, it’s always a treat to pick up the new season on DVD to see and hear it as it was intended. While it hasn’t aired on television (yet), the same is true of Continuum.