What is most immediately apparent here is that Continuum feels familiar. It feels like visiting with old friends you haven’t seen for a while, like kicking off your shoes at the end of the day and sliding your feet into a pair of slippers. The movie opens with an impressively long shot — a walk through Stargate Command, with the camera passing by one familiar face after the next, and ending on SG-1 getting ready to go through the gate. For long-time fans this is “home.” For newer viewers, it’s important to establish the Earth that is about to be thrown into chaos.

If Stargate Continuum is nothing else, it is a movie to be loved by any fan of science fiction. It is designed for old fans to invite their friends, and in so doing for making new fans. Whether you’ve been familiar with the franchise since Kurt Russell’s interpretation of Jack O’Neil, or your knowledge of Stargate is simply “the one with MacGyver,” this movie is the one you are looking for.

For the old fan there are familiar faces and obscure references. A Goa’uld such as Zipacna, who only appeared in two or three episodes, is referenced in the film. Major Davis appears at the very beginning and then never returns, but the nod to the significance of the character is completely appreciated. Then there are threads that lace the original 1994 feature film to Continuum, bringing the franchise full circle once again. Ra, played by Jay Davidson in the first “Stargate” movie, returns in this film in a portrayal by Jay Williams (who played the masked character in “Moebius, Part 1”).

It goes without saying that the main cast is infinitely comfortable in their roles. What makes the opening even more familiar is the return of Jack O’Neill (Richard Dean Anderson) — and off-world, even. The team has traveled to the new Tok’ra homeworld for the execution of Baal, the last surviving System Lord … or, more precisely, his last clone. 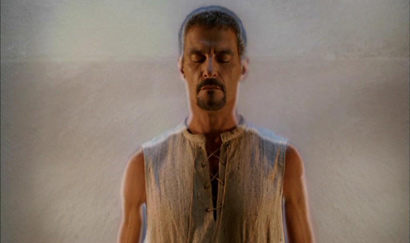 Cliff Simon returns as Baal, who has his story wrapped up in a fantastic way … a way entirely in keeping with his conniving character. 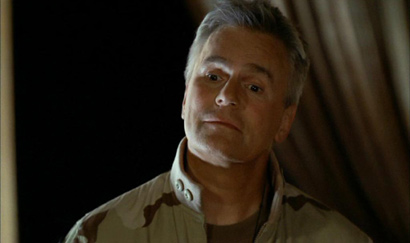 But just when we feel comfortable, that we know this world and know what is coming, there is a radical shift. Vala and Teal’c vanish into thin air, Baal breaks loose … and murders Jack in front of us. Everything has changed.

The team rushes to the gate as the massive and beautiful Tok’ra city (remember, these guys were underground nomads for 2,000 years!) disappears. There is no way to stop this. There is no way to save any one. The only thing that Sam, Daniel, and Cameron can do is run. When they arrive back on Earth (insulated from the timeline change by being in transit through the gate when it hits them), they know instantly that this attack is bigger than the Tok’ra planet. Everything has changed.

That’s a great theme for this film. The promo tagline is “History may never be the same again” — which really makes sense, both within the story of Continuum and beyond it, looking at the Stargate franchise as a whole. While we expect that our heroes will be able to restore the timeline and save the galaxy once again, there is a palpable sense of how important this story is. Stargate may never be the same again.

Continuum tells a familiar story in an unfamiliar way. At the center of the story is a portrait of what Earth would look like if the Stargate program had never existed. Using intel stolen from Earth, Baal has targeted the Stargate at its most vulnerable point in history — when it was being quietly transported from Egypt to the United States at the outbreak of World War II. By taking SG-1 out of the equation, Baal can use his knowledge of the future to restore the fallen Goa’uld empire, seize control of it and, eventually, invade Earth.

It’s not the first time SG-1 has dealt with a temporal crisis; it’s not the first time they’ve been called upon to defeat a seemingly unstoppable enemy to save the Earth and the galaxy. But at the same time, it tells that story in a fresh and exciting way. From shot choices to editing moves, from the Arctic to F-15s dog-fighting with Goa’uld Death Gliders, Continuum is fresh, beat after beat.

In many ways, Continuum takes some of the best qualities from SG-1, scrunches them up, and reshapes them into something new for this DVD. One of our favorite episodes from the series is “2010,” where the team must send a message into the past to prevent the slow destruction of the human race by the Aschen. The climax to this episode feels very much like that time travel story, but in a way that is new. 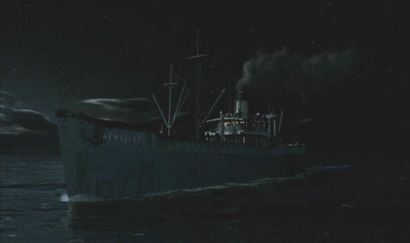 Continuum reveals a new piece of Stargate history: the gate’s journey across the Atlantic Ocean on the Achilles. 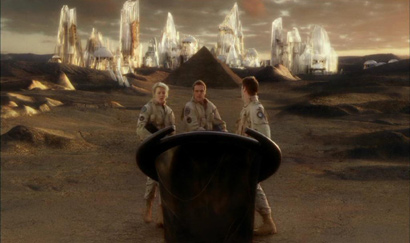 Sam, Daniel, and Cameron rush back to the gate as the Tok’ra city itself disappears into thin air.

Though this is an action movie with a galaxy-sized crisis, it is driven by the characters. The longer format allows for the time to dwell on Sam, Daniel, and Cameron, and their reactions to the events going on around them — even to follow them through a year when the plot is not moving forward. As the writer and director observe in the audio commentary, these scenes would be the first to go in a 44-minute episode. They are utterly vital here. They not only make Continuum feel like a full movie, but by giving the characters space, they make it one of the better stories Stargate has told.

Daniel Jackson not only suffers a major injury (and is nearly lost), but when he finds himself living a solitary life in New York City he decides to reach out to his alternate self — still a fringe archaeologist who is sick of people ignoring or outright mocking his theories. It’s a short scene with nothing but Michael Shanks and a phone, and the actor plays it exceptionally well.

It must be also said that Cameron Mitchell fully comes into his own as a character in this film. We’ve been hopeful about Cam since his introduction three years ago, but in two years of the television series the character never quite clicked. From his friendship with Sam and Daniel to his discovery of his family ties, Mitchell has finally become someone we know and like.

NEXT: The Movie (continued)