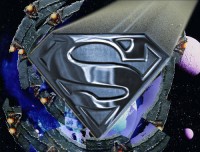 Over the course of its ten-year run, Stargate SG-1 had plenty of achievements of which to be proud.  Throughout the decade it was on the air (1997-2007), the show racked up seven Emmy nominations, two Hugo nominations, and between the awards received from the Leos, Saturns and Geminis it took home almost 20 trophies.

Its crowning achievement in the award category, however, may be the Guinness World Record it holds.  In 2007, SG-1 overtook The X-Files under the category of Longest Consecutive Running Sci-Fi TV Show.  (Of course, with the nearly 50-year-old Doctor Who in the mix, that title should be qualified with “continuously produced” or “in North America.”)

Unfortunately for SG-1, records are made to be broken. In just over one year, The CW network series Smallville will do just that.  The young Superman series has been handed the greenlight for production of a tenth season.

In a confirmation report by Michael Ausiello on Entertainment Weekly‘s Web site, the long-running series was heavily favored to return for another year.  While ratings for Smallville have dropped considerably (due to a shift in airing nights from Thursday to Friday — often considered a dead zone for TV ratings in general), they still have improved demographically upon what The CW was airing in that time slot the year previous by anywhere from 67 to 200 percent.

Another key to the series return:  the performance of the recent Smallville TV movie event “Absolute Justice.”  The double-length episode, which guest-starred SG-1 alums Michael Shanks (“Daniel Jackson”), Brent Stait (“Ferretti”), and Brittney Irvin (“Merrin”), scored close to three million viewers, giving The CW its best Friday night ratings in almost 18 months, and proved to the network that the series still had drawing power and could be “event television.”

Here at GateWorld, we posed this scenario almost a year ago.  Television is an ever-changing landscape where nothing is guaranteed.  Did Smallville (another Vancouver-produced series) have enough life in it for a tenth season?  Would the series be able to survive a move to Friday nights?  Would lead actor Tom Welling be willing to return?

The answers to all those questions are a resounding “Yes.”

How does tying SG-1 in the number of years in production unseat it from the world record? Stargate SG-1 produced 214 hours in its run.  By the end of next season (assuming a full, 22-episode season), Smallville will have produced 218 episodes — four more than SG-1 and enough to overthrow SG-1 as the new Guinness World Record holder.

SG-1 produced 22 episodes per year for its first seven seasons, after which Syfy Channel reduced its annual order to 20 for the final three years.  Smallville suffered one 20-episode season due to the writer’s guild strike, but otherwise has continued with 22 per year.

The series continues Friday nights at 8 p.m. (7 Central) on The CW.

(Thanks to Ron and Madwelshboy for the tip)

Surely just the North American record, as even ignoring New Doctor Who it ran for 26 years consecutively? or 22 if you count the 1985 thing as a break.

Well, if anything was gonna break SG-1’s record, I’m glad it was one of my other favorite shows.

I know that Doctor Who has been around for a long time… but there have been *massive* gaps in its production, a revolving door of cast and writer changes, and the length of its episodes are nothing compared to an American 22-episode production schedule.

I love both SG1 and Smallville greatly! So i’m glad to see Smallville prevail!

All that says to me is…. GET MAKING A NEW SG-1 SERIES!

‘Of course, with the nearly 50-year-old Doctor Who in the mix, that title should be qualified with “continuously produced” or “in North America.”’

Hey, wow, look at that. Had they not assumed they could hold the record with a pithy “10 Years Straight” record and just kept SG-1 for another 2 years, maybe Smallville would have gotten canned and Ark of Truth wouldn’t have felt like a rushed season and a half of story.

I love SG-1 and like Smallville, I actually think the more recent seasons of Smallville have been better. Either way, it’s always nice to hear success stories. Congrats!

as bad as smallville is. it is better than sgu

I don’t understand this. Although Doctor Who had a 16 year break starting in 1989, it ran for 26 seasons without a break with close to 700 episodes between ’63 and ’89. This makes it the longest running consecutive scifi series in the world. 26 consecutive series is way more than ten. I don’t get how Guinness work this out.

Loved Smallville’s first four seasons, but from that moment the show went downhill. They should just cancel the show and stop ruining the Superman mythology.

[…] is a fine show. That’s clear otherwise it wouldn’t be contesting the record, but it’s not SG-1. Hopefully the ascended beings above will intervene and do something to stop […]

this is for american sci records

I loved SG-1 but I’m thrilled Smallville will break the record. I love it much better and it isn’t ruining the mythology. It just gets better every year where as SG-1 really should have ended after season 7. It breaks the record against Dr. Who because it only had 159 episodes even though they were 700 parts, That’s what they’ll have taken into account.

“Longest Consecutive Running Sci-Fi TV Show” this is non specific to what part of the world, if it was to say North America, then fine, Stargate SG-1 then Smallville would hold the title. But it doesnt, is Guinness totally stupid? The Longest Consecutive Running Sci-Fi TV Show IN THE WORLD is Doctor Who, and even if you count all the gaps in production, the longest part of Who’s run is still is about 10 years longer than SG-1. Stargate should never have been awarded the title in the first place. I dont know where guinness gets its information from, but… Read more »

it just shows it pays to cater to the 14 year old crowd who all share a brain cell, then actually have good shows on TV anymore. it’s the downfall of TV…. eventually it will be all “Ouch, My Balls!”

Sorry Philster but there were 159 stories or ‘serials’ which were made up of 696 seperate episodes. In the same way two part episodes count as two episodes in SG1 (eg. Exodus and Enemies). Most of the 696 episodes were only 25 minutes, but some were longer with a total time of over 17000 minutes. Compared to 9000 odd minutes of SG1. Whichever way you look at it, the original Doctor Who run beats SG1 or smallville by a long way.

I think calling Smallville sci-fi is a stretch.

If its a WORLD RECORD, it better be the longest running sci-fi show in THE WORLD.

which it isn’t so the “award” is moot.

SG-1 doesn’t have a world record, it has a North American record.

Where in that phrase do you see the words North or America? – especially when its “THE GUINNESS WORLD RECORDS”

I like Smallville and I do watch it, but I think record holder or not, it will never reach the same quality as SG-1. At least not in my eyes :)

[…] is a fine show. That’s clear otherwise it wouldn’t be contesting the record, but it’s not SG-1. Hopefully the ascended beings above will intervene and do something to […]

It’s utterly hilarious and such a demonstration of American ‘superiority’ that you can ignore Doctor Who, which ran without a break for 26 years, and declare a US show the ‘longest running’ when it’s done less than half of that!

The record was a mistake, acknowledged afterwards by the editor. Dr. Who still holds that record.

I’m the Editor in Chief at Guinness World Records (and the one who presented Russell Davies his Doctor Who certificate at ComicCon last year). To clarify: Stargate achieved the record for the Longest running consecutive TV sci fi, as it was currently ON AIR and had been on air CONSECUTIVELY longer than any other TV sci fi that was currently on air at the time; Doctor Who has the absolute longevity record as it started in 1963 but is has not CURRENTLY been on air longer than SG (and yes, DW had longer spells consecutively, but not at the present… Read more »

Yes! Yes! It’s the Longest Consecutive Running Sci-Fi TV Show in North America – Now,can you people MOVE ON… & Thomasturbo i agree with you the first four Smallville season were GOLD – Then they sould have done a Movie(With the commencement/arrival storyline) Then – Hire a lot of DC comic book writers & Relaunch with four more seasons with clark really becoming Superman/Lana dying(but could be brought back as a clone)/Lex dying but not before getting split in half by black kryptonite(so the ONLY lex left standing would be the one we saw in onyx)(& let’s not forget the… Read more »

SG-1 was the best! I’m sorry to hear Smallville will break its record. Smallville is a good show, but they have gone way overboard with the typical CW drama crap. I wouldn’t call it a sci-fi show, but I’m not Guinness.

@scifirocks Nobody was talking about SGU here, it isn’t even mentioned in the article.

How on earth can Smallville be considered Sci-Fi? Don’t get it.

As others have said, surely Dr. Who or Star Trek is by far the longest running Sci-Fi series anyway.

They are NOT the same genre. SG-1 was Sci-Fi. Smallville is more like a soap opera or teen drama like 90210.

I’d say that Smallville is fantasy not science fiction.

Well ok this is cool i know they mean American sci fi show, but no matter how you look at it i won’t call Smallville a Sci Fi show.

Smallville for me got boring after Season 2. I’m suprised it’s lasted this long, what with it’s main antagonist gone. It’s very drawn out, and I believe it should be put under the fantasy genre.

More so I’d like SG-1 to fight for that title. Bring on Seasons 11 and 12 following this hiatus of SG-1/SGA movies. Anubis gets free (how? I don’t care) and brings with him infinite knowledge and destruction.

So Doctor Who holds the 2 records “Longest Consecutive Running Sci-Fi Series-Worldwide” and “The Most Successful TV Sci Fi, based on longevity, DVD and book sales-Worldwide”.

I like both shows but can’t believe that Smallville show has gain so much popularity to break the world record of SG – 1.

Does stargate atlantis not count? Or stargate universe?