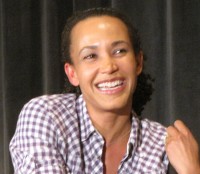 For fans attending the final day of the Creation Entertainment Official Stargate Convention in Vancouver, there was one overriding theme throughout the day: family.

That sentiment was shared by the celebrity guests dropping by throughout the day — ones with ties to all three Stargate series:  SG-1, Atlantis, and Universe.

For some fans, the day started early with a breakfast attended by three of the stars of Stargate Universe.  But for many, the day didn’t truly begin until a morning stage appearance by Stargate executive producer N. John Smith.  Smith began his Q&A session, hosted by Creation Entertaiment co-founder Adam Malin, with a bit of sad news and revealed that his duties as executive producer of SGU have ended and he has semi-retired.

“There are other things I want to enjoy,” Smith said.  “Collecting art, working on crafts, spending more time with my grandchildren.  But I already miss the show.  Half of my career has been with Stargate.”

Smith also announced that his previous duties have been transferred into the “good hands” of producer John G. Lenic, and that he will continue to play a role and has made a commitment to production duties for any Stargate movies going forward.

Following Smith on the stage was Atlantis actress Rachel Luttrell (“Teyla Emmagan”), who began her appearance with a song, to the applause of the crowd.  Luttrell is currently in the midst of writing a feature film entitled “Nothing Ventured.”  She is also actively recording an album she plans to release in the near future featuring folk songs and songs from the World War II era.

At one point in the session, Luttrell was asked where she would have liked to have seen the character of Teyla develop if Atlantis had been granted a sixth year.

“I think I would have liked to explore the relationship between Teyla and Ronon more,” Luttrell said.  “Explore more of their culture and their place in the Pegasus Galaxy.  Having a look at life in Pegasus from their point of view.” 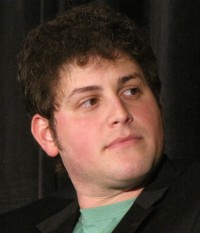 The final panel of the day was a big one as actors Brian J. Smith (“Matthew Scott”), David Blue (“Eli Wallace”), Elyse Levesque (“Chloe Armstrong”) and Mark Burgess (“Jeremy Franklin”) took the stage all at once for the Stargate Universe panel.  For over an hour, the actors took questions and riffed off one another and you could clearly see both the excitement for the series and the friendship with each other they shared.

Asked by a fan whether they’d ever broken anything on set or while filming, the responses were as unique as they were hilarious.  Between takes during shooting one day, Blue was doing pullups underneath the steps in the Destiny gate room and two “kino” remotes fell out of his pockets, shattering them.  While filming in a quarry, Levesque gashed her leg open and still bears a scar from it.  Burgess admitted to almost breaking his leg when he stepped into the groove the Destiny‘s Stargate sits in.

During the panel, Smith and Levesque also recounted their trip to Comic-Con last summer.  At one point during the event the duo decided to visit the SGU booth, figuring they would be recognized.  Instead, the person running the booth offered them a poster (which they are pictured on) for the series and asked if they wanted to enter a contest with the grand prize being a guest role! 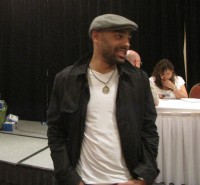 After the panel, the group did autographs and to the surprise of fans, the convention had a party-crasher:  actor Rainbow Sun Francks (“Aiden Ford”) popped in unannounced.  Blue and Francks are good friends and dropped by at Blue’s insistence after learning the convention was going on.  Francks graciously took photos and signed autographs for all that asked him.

The official convention ended on that note, but for members of GateWorld, the fun wasn’t quite over as the annual GateWorld dinner was held a few blocks from the convention site.  Actor Colin Cunningham (“Major Paul Davis”) returned to dine and visit with GateWorld members, and a few lucky members walked away with pieces of history.  Propworx generously donated several Stargate props and items as door prizes for the event, including authentic D.H.D. and Puddle Jumper crystals, Replicator blocks, an “Elizabeth Weir” costume, and more.

Keep your eyes on GateWorld in the future for more news stories from the convention.  In addition to our main stage coverage, we also have gathered a dozen interviews from your favorite Stargate actors — both new and old!  Also coming soon, a new GateWorld feature announcement you won’t want to miss!

Our thanks to Propworx and especially to Creation Entertainment for their continued support of GateWorld throughout the convention and beyond.  We’ll see you in Chicago this August, and in Vancouver in 2011!

You did a great job with these Con reports. Con’t wait until the interviews are posted. See you in Chicago.

was there any questions about the movies?

Oh man, how I miss Rachel Luttrell! If you only knew! And alluv Atlantis cast, awww.