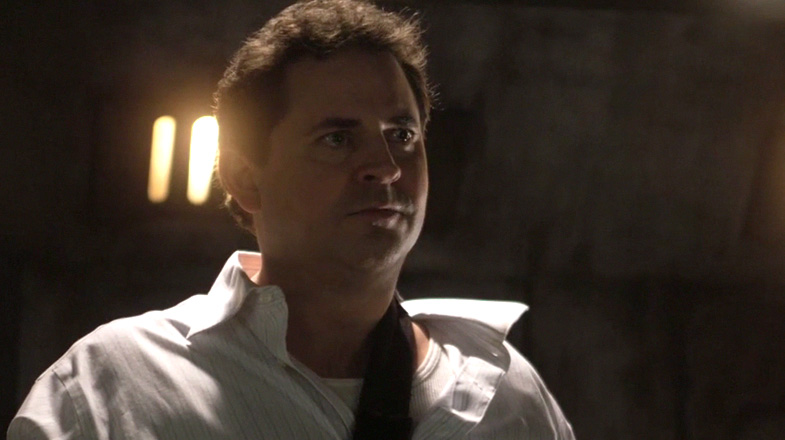 Scientist assigned to the Icarus Base. Dr. Franklin was forced to evacuate with the rest of the Icarus team to the ninth chevron address during an unexpected attack on the planet by the Lucian Alliance, and thus became a member of the crew of the Ancient ship Destiny. Franklin had previous off-world experience, and so may have been assigned to Stargate Command or Atlantis in the past.

Perhaps under duress or manipulation by Nicholas Rush, or perhaps on his own initiative, Franklin sat down in Destiny's control interface chair and activated it in the hopes of gaining access to the ship's key systems. Instead it left him in a near catatonic state for several weeks.

Later, when he went back into the chair to save the ship, Franklin vanished from the room entirely. His fate remains unknown, but Dr. Rush later saw him on the ship's bridge on multiple occasions. He did not know if Franklin as an apparition of Destiny herself, or a figment of Rush's own, fractured psyche.

Note: Dr. Franklin's first name was not officially established on screen as canon.

Air, Part 1 - Franklin and the rest of the Icarus team evacuate through the Stargate to the Destiny.
Air, Part 2 - Franklin is threatened at gunpoint to fix a Destiny shuttle airlock door, but when he admits he cannot seal the hatch he must watch Senator Armstrong sacrifice himself so the rest may live.
Air, Part 3 - Giving up on finding something to fix the ship on a desert planet, Franklin takes a bullet after he tries to flee to another world with Curtis and Palmer.
Justice - Working with Dr. Rush to study the newly discovered chair interface, Franklin ends up sitting in the dangerous device and is left in a near catatonic state.
Sabotage - Franklin manages to communicate with Lt. James, and volunteers to go back into the chair to get Destiny back into F.T.L. -- saving the ship from alien attack. But when the doors to the interface room open again, Franklin has vanished.
Aftermath - After he discovers Destiny's bridge, Rush sees Franklin there and receives important help. But he does not know if Franklin is a manifestation of the ship, or Rush's own fractured subconscious.
Pathogen - Franklin appears to Rush again on the bridge, suggesting that he can't do the work intended to be done by a full crew.