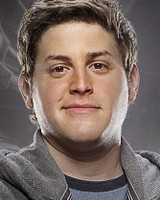 We’re just one day away from the much-awaited return of Stargate Universe!  Season One continues tomorrow — Friday, April 2 — with “Space.”

To get your SGU engines primed again, today we present our five favorite Eli Wallace moments from the season so far.  David Blue’s Eli brings not only a dash of comedy to an otherwise serious environment, but he also represents the “everyman” — an ordinary guy (with a bit of added brain power) thrown into a crisis of intergalactic proportions.  With the charm of the boy next door and a dash of unrequited love, Eli is quickly becoming one of fans’ favorite characters.

Fans of Eli can follow David on Twitter, and visit his official site (complete with blog) at David-Blue.com.

Desperately low on drinkable water, the ship stops at an ice planet where Colonel Young and Lt. Scott have to hike a distance to bring back clean ice. In need of a quick way to transport the heavy blocks of ice back to the Stargate, Eli shows off his newest invention — a table top floating off the ground because of the dozen or so kinos he’s placed underneath. Why did Eli happen to have this perfect solution handy? He answers, somewhat sheepishly, “Actually it represents my most recent attempt to fly …”

We knew from Eli’s introduction in the first episode that he was leaving behind his sick mother with some reluctance. But the Air Force agreed to take care of her medical bills in exchange for his cooperation, and so he went.  But what’s wrong with Mom?  In “Time,” we find out: hunkered down in a cave, at night, in the rain, on a planet infested with alien creatures trying to kill them, Eli confesses to T.J. that his mom has H.I.V. — stuck by a needle trying to restrain a junkie in the E.R. — and his dad left them because of it.  What makes this moment so special is not the confession itself — it’s that it comes out while the crew is safe and warm on Destiny, watching the kino recording of the moment, leaving Eli extra vulnerable.

The communication stones give Eli a chance to return home and visit his mother, in the body of someone else, if only for a few hours. And the military even grants permission for him to tell her who he really is and (with limitations) where he’s gone. He doesn’t know what the news will do to her, if she can even understand it — and so when she opens the door, Eli decides at the last moment to hide. He pretends to be someone else, and has a nice — but somewhat distant — visit home.

Recruited (rather against his will) by Nicholas Rush and Jack O’Neill, Eli is beamed right out of the comfort of his mother’s house and on board the U.S.S. George Hammond, in orbit and about to depart for Icarus Base.  Confronted with the wonders of the universe, Eli agrees to go along with them and see if he can help Rush solve the ninth chevron problem.  But first, he asks … “Can I get some pants?”

Destiny‘s clock is counting down, and there just isn’t enough time for Lt. Scott and MSgt. Greer to make it back before the Stargate disconnects and the ship jumps away into F.T.L., leaving them behind forever.  But Dr. Rush has an idea to keep the gate open for those vital extra seconds, and he tells Eli to stick his arm into the event horizon.  With great trepidation Eli complies, holding open the wormhole until his friends can make it.

What did we miss? And where do you want to see Eli go in the second half of the season?  Sound off below, and check out the brand new Stargate Universe sub-forum at GateWorld Forums!

Number 4 is a really great one.

I didn’t think I was going to like the Eli character. Turns out, he’s one of my favorites.

To me, the character of Eli is one of the better ones going for SGU. Couch potato nerdy, an average looking person unlike most of the others.

As long as the writers keep him and Chloe apart, because in the real world that hook-up would never happen, then his character should remain life like.

Thumbs up to Eli, big thumbs down to Chloe …

My post was edited for an anti-Chloe remark? It was intended toward the character and not the actress…

My favourite Eli moment so far was the one where O’Neill and Rush where at his doorstep. It really made me chuckle.

I’m not a huge Eli fan myself. For me, he’s too smart-alecky and anti-hipster hipster. As bland as it may be, I like the straight forwardness of Lt. Scott: A young man taking his duty seriously and trying very hard to become a leader (and in a way, prove the slacker stereotype of our generation wrong).

In regards to Number 3, best moment of that episode was that he said “I’m Philip Fry” – only after watching it the second time it clicked!

They should just rename stargate universe eli show and throw everybody else out the air lock or turn them into peons to advance eli story lines.

Eli is like the only character on stargate universe worth anything the other characters I have to look up there names since I have no idea who they are eli is the only one who is not 100% boring So I remember his correct name.

On #1 – Am I wrong in my thinking but wasn’t this mode of stopping a Stargate from shutting down discovered in SG-1 or am I getting confused.

I enjoy the character of Eli, but dislike the actor…..if that makes any sense at all. I think the character is a great addition the the SG lore, being that he has to prove his worth at every turn with both the military crew and scientific crew alike, but for some reason David Blue the real-life person kinda pisses me off. Thus far I’ve been able to separate my dislike for the actor to see the positives of the character (my own re-hash of the beef I had with Robert Picardo back in SGA); hopefully this blooming connection with the… Read more »

I think that a character on a show that’s only had eleven episodes in total so far to already have 5 greatest moments if brilliant and speaks wonders to the talent of the actor, and honestly, the character has had more than five greatest moments.

Eli is perhaps the most real character on the show. I think there will be a lot of people that will be able to relate to him as the show goes on

I’m actually a really big fan of Eli. I think my only complaint/suggestion is that the crew needs to come across a few new wardrobe changes, and Eli is at the top of that list. “All I got is ‘You are here.'”

Thanks for article – I actually like Eli too. On another note – those horrible “green links” – commercial, I guess you have to have them (money wise?). Apart from being extremely annoying (and of no use) – to me they really signify a “bad content site” and that’s not really Gateworld at all. (Or can someone enlighten me?)

@Junque Man – I’m sure Eli and that Chloe character (she’s so forgetful I had to scroll up to get her name) could very well be a couple “in real world” and I would love them to be a couple in SGU – Eli seems to be able to bring out the best in her and being with her seems to bring out some other sides of Eli (though he seems to have a lot of good and gentle sides to hem). And why whould you think that they could not be a couple in real life – because she… Read more »

I adore Eli and David Blue does a wonderful job of making Eli “uncomfortable and unsure” without it come off as weak.

Eli is the best. Even though our favorite nerd is the new guy and has to find his place, he is doing a pretty good job.
But I disagree with most when it comes to Chloe. Let the senator’s daughter hook-up with whoever she wants.
I’d love to see something happen between Eli and Sgt James. They have some hilarious sexual tension between them after the “wrong-turn with the kino” and “how else could I get you away from there? (Chloe in the shower)”. It would definitely make for some interesting situations,