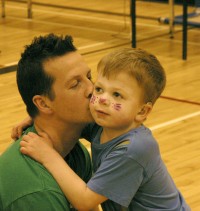 Stargate actors — and more often than not, Stargate fandom as a whole — are generally very giving individuals.  They regularly provide their time, talent and energy to varieties of different clubs, organizations and charities designed to positively improve their communities and the world as a whole.    It’s when both the actors and fandom come together to fight a common cause, however, that allows for magic to truly happen.

Such will be the case at the end of September as actors from Stargate (and several other genre series) gather together with fans for a gala event to support research for a rare condition called Hunter syndrome.   The event, entitled “Once Upon A Cure”, is being held on September 24 at the Sutton Place Hotel in Vancouver, British Columbia.

Hunter syndrome, which affects roughly 2,000 people worldwide, is a degenerative genetic disease caused by a lack of a specific enzyme that most people are normally born with.  The lack of that enzyme over the course of time eventually causes cells and organs to function improperly, in many cases causing mutation and enlargement of both body organs and skeletal structure, amongst other things.  While many people with Hunter syndrome can function with a high quality of life, the disease can in many cases attack the brain and central nervous system which causes various degrees of mental impairment.  And sadly, since the disease is present at birth and initial symptoms mimic normal childhood maladies (like colds, runny noses and ear infections), many doctors misdiagnose the symptoms until larger issues become apparent.

The gala event, featuring an “Alice In Wonderland” theme, begins with a cocktail reception, followed through the evening by a full plated dinner, chocolate dessert buffet, live and silent auctions, live musical entertainment and a dance featuring a local Vancouver celebrity DJ.  Among those with Stargate roots currently planning to attend are:

In addition to those listed above, other notable genre celebrities slated to attend include Smallville‘s Allison Mack, Eureka‘s Colin Ferguson, Christine Chatelain from Fringe, and more!

For more information about this worthy event, visit their Web site!  Tickets are still available at $250 each for the full evening with a discount included for tables of eight.   If you’re unable to make the event, you can still donate to the cause.  And for those that wish to help but are unable to financially, there are multiple volunteer opportunities both before and during the event where your talents can be used and appreciated!

THATS COOL! i mean seriously even after all is said and done these sg actors are willing to get together on a meaningful project, seein that makes me happy not just for the good they are doing for this cause but also it gives me hope for the future of the franchise and actors being willing to return once mgm gets thier head out thier… well u know where their heads are lol

Thanks for this Chad, I will disperse this information out to other sites I visit (with credit of course).
Well Done!!

FYI Christine Chatelain was in 4 eps of Sanctuary before she was on Fringe. Though it wasn’t a very visible role.

(Yes that’s a terrible pun: she was the invisible girl.)

It’s great to see actors from a show come together and support a cause in a way that doesn’t feel like a cheap plug for their show (I’m looking at you Glee).