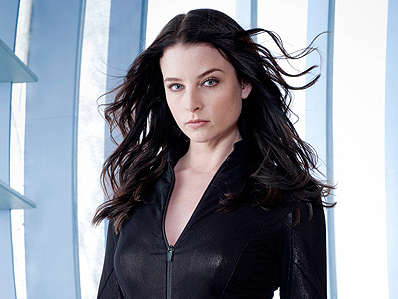 Syfy Channel has picked up the rights to air the third season of Continuum, the Canadian hit that features several former Stargate actors.

The series was renewed for Season Three in June by its home network, Canada’s Showcase.  Like Season Two it will reportedly be comprised of 13 episodes.

The season premiere in the U.S. drew 1.42 million viewers (up slightly from the first season).  After slipping a bit, last week’s episode was back up to 1.33 million viewers, and so far this year the show is averaging 728,000 viewers in the key Adults 18 to 49 demographic for Syfy.

Continuum stars Rachel Nichols as Kiera Cameron, a police officer from the future who has been sent back in time to the present day — along with a group of ruthless terrorists.  With her knowledge of the future, her tech, and her training, Kiera must protect present and stop Liber8 from altering the future she knows.

Catch new episodes of Continuum Fridays at 10/9c on Syfy Channel!  Season Three is expected to begin next spring.

As always I recommend Joe Flanigan :)

I think they should do an episode where Kiera goes back in time and stops them from canceling Stargate, Warehouse 13 and a few other shows by taking over the SyFy building!

I don’t know why everyone doesn’t watch Continuum, it’s a show with depth and incredible actors and writers. I love it.

I agree with ya! I love the show and where its presenting. Just scared that the NBC jerks decide to pull it before it takes off!

Not to worry, Continuum is produced by Show Case in Canada.

it´s funny how nowdays seasons is so shorter than they were in sg times.

It’s difficult for any new serialized show to compete with the flood of empty, brain death inducing “reality” shows. Shorter seasons are one of the ways networks limit their financial exposure in the event a new show flops.

Its good,… But I can’t really get into the actors some are great others are so so.