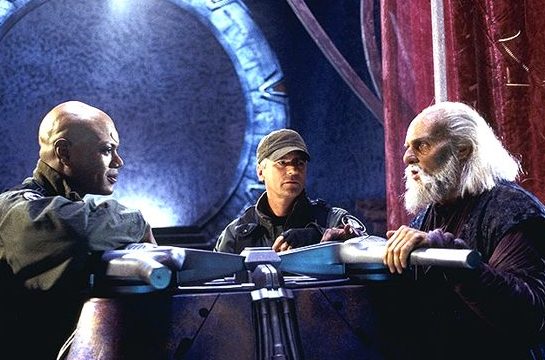 SG-1 discovers an elderly man known for developing technology to fight the Goa’uld. Daniel is tricked into switching bodies with the man, Ma’chello, who believes he is “owed” for all the good he has done.

Rewatch “Holiday” this week! Then post your comments below, or head over to the “Holiday” discussion thread and see what people were saying back in the day. What are your favorite moments?

Good times! Wish I could go back and watch them all again – I can’t believe that this one aired in 1999, it seems so long ago…

Ehh. I almost didn’t wanna watch it again. I remembered this episode and didn’t care for it. I watched it anyway. Nothing has changed in my views on it. The only parts I like is when Teal’c and Jack were switched. I’m not a huge fan of when new aspects or arcs are introduced into a story and not really touched on again or brought to any kind of solid conclusion.

I didn’t really care much for this one either. It did have some decently funny parts and was well enough to pass the time with, but in the end it was pointless and didn’t tie in enough with the rest of the series to matter.

I always like this episode every time I see it. Michael is great with the street guy and then the body swapping thing is hysterical–cut my hair?! Loved re-seeing it once again.