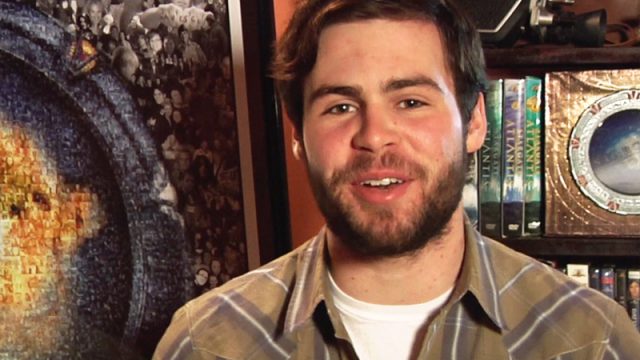 We all grew up watching television shows we enjoyed. Shows we discussed at school, with friends, with family, and to anyone who would lend an ear to hear about our latest obsession. Then the shows went off air, and within a year, we’d practically forgotten about their existence.

But there’s always that one show, no matter how long it’s been off air, no matter how long ago its relevancy has faded, is still as entertaining, meaningful, and inspiring as the day we first discovered it — a show that wasn’t just a weekly escape, but a passion. Perhaps it wasn’t the most popular or most watched show, but it held a special place in our hearts.

I first discovered Stargate when I was 12 years old. Now, six years later, in my first year of college, I not only credit Stargate as that special childhood memory, but also as the inspiration and catalyst for the current direction of my life.

Growing up in rural North Carolina, filmmaking wasn’t something I was particularly knowledgeable about or even aware of. I never lived in an art-centric environment, and had no connection to the entertainment industry. For the longest time, I was certain the military was my calling. But it was the magical adventures Stargate brought to life on the small screen that caught my attention and ignited a passion for visual storytelling that to this day hasn’t faded.

Now a resident of Los Angeles, California, attending film school at Chapman University, Stargate has more personal meaning and relevancy than it ever has. What started out as casual afternoon viewing became a significant part of my life, and I’m willing to bet I’m not the only one for whom the show has left a personal legacy.

In the weeks to come in this column, “Stargate’s Legacy,” I will examine three episodes from each of the three Stargate series — SG-1, Atlantis, and Universe — that I found to be specifically noteworthy. Not because they were the most entertaining or flashiest, but because they were unique, thought provoking, inspiring, or communicative of a theme or idea that resonated with me. At the end of the day, it wasn’t the visual beauty, while certainly present, that makes Stargate so endearing, but the imagination, rich characters, and thematic depth of the franchise.

It’s something I will celebrate and remember now and for years to come, even if the shows no longer exist in the public eye.

GateWorld Wants To Hear Your Story! Put yourself on video, upload it to YouTube, and send us a link sharing what Stargate has meant to you. Or, post your story at this special thread at GateWorld Forum.

We’ll feature some of your contributions right here on the site!

Congrats for the effort!

Upgrades and Window of Opportunity always cracks me up and thats what I love is a good laugh and some cool ass science fiction to go along with it. Sg1 had such a good cast chemistry I watch the whole stargate television continuity every year and it never gets old ;-) I’m from Minnesota to so you Gotta love Anderson

Genreal Hammond Colonel Oneill what the hell are you doing?
Oneill back: in the middle of my back swing xd that was epic.

Great ideal fight for a real end to SGU We all have that coming.

same as the about me in my user info I am a Fan of Great Sci Fi and rather loathe what has happened to scifi after the scifi channel changed there logo to SYFY all anyone who loves scifi can say about that is WHY were you trying to run 99.9999999% of your channels viers and fans off by pissing in their faces, contrary to popular belief Science Fiction fans arent fans of any crap you throw in fromt of them also the ass who did the SYFY was also part of killing Stargate Universe if they werent they are… Read more »