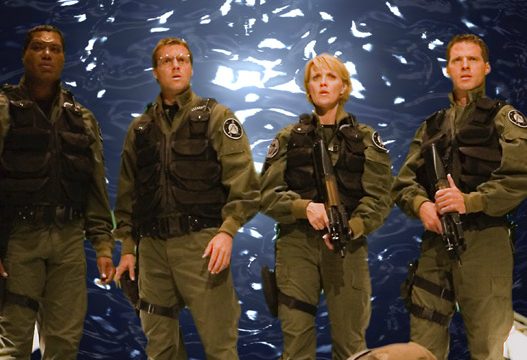 “What the hell is going on?”

A baffled Lt. Col. Cameron Mitchell speaks in a long, southern drawl — far deeper than we’re used to. And we as the audience are wondering the exact same thing.

After a wormhole anomaly occurs during an unscheduled offworld activation, SG-1’s I.D.C. pops up and the team saunters out of the event horizon with no sign of danger.

And things only get weirder.

During the debrief, SG-1 drops erroneous statements ranging from the planet they visited to current dealings of verifiably deceased allies. As the situation progresses from odd to unsettling, the gate activates again — this time, at SG-1’s scheduled return time. Lo and behold, SG-1’s I.D.C. code pops up again, and in walks the team … only to face themselves already at Stargate Command. 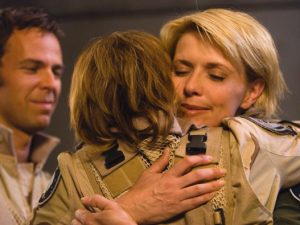 As the S.G.C. races to figure out the origin of this wormhole anomaly and an alternate team, more and more SG-1 duplicates start filing in. Gate travel is quickly suspended, and it’s up to “our” SG-1 to put the pieces together, solve the crisis, and return the teams to their respective realities.

Given the show’s gradual shift toward darker and increasingly serialized storytelling, Season Nine’s “Ripple Effect” represents a compelling stand-alone hour of Stargate that encapsulates everything we hold dear about the show: high stakes, scientific quandaries, technobabble, team chemistry, mystery, betrayal, and ultimate triumph over a sinister forces. Except this time, the sinister force turns out to be an evil version of SG-1.

The first alternate SG-1 to arrive has less-than-admirable intentions, playing dumb while they scheme to hijack the Prometheus and travel to the Pegasus Galaxy. Their goal: steal Atlantis’s Z.P.M. to power their Ancient Antarctic outpost, their insurance policy against an imminent Ori invasion. 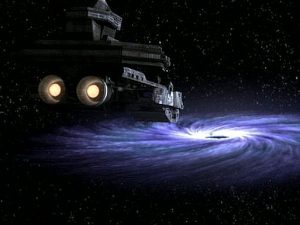 “Ripple Effect” is, on paper, a Z.P.M. heist that pits SG-1 against itself — a cunning game of reverse psychology and trickery. It’s also a chance for our SG-1 to look at themselves in the mirror, and come to grips with who they might have been in another life. It delivers the heady intellectual thrills one would expect, but it also gives us a bit more.

“Janet. This may look like home to you, but it’s not. This is not the Stargate Command you left, we’re not the Daniel and Teal’c you know …”

Teal’c chimes in: “In our reality, Dr. Janet Fraiser died two years ago.”

Daniel and Teal’c are the first to come face to face with Dr. Fraiser (guest star Teryl Rothery), who is currently serving on an alternate SG-1. “Ripple Effect” takes place two seasons after she was killed in the pivotal two-parter “Heroes” (analyzed in the previous Stargate Legacy entry), and her appearance is a bittersweet turn of events. And Sam Carter encounters an alternate Martouf (J.R. Bourne), years after our Martouf was killed in action (“Divide and Conquer”). She learns that in his universe she and Martouf shared a romantic relationship that lasted for some time, although it eventually fizzled out and ended with her finding someone else. Their current reunion, however, is not devoid of passion, and if not for the poorly timed entry of a new Asgard colleague they might have just rekindled some of it. 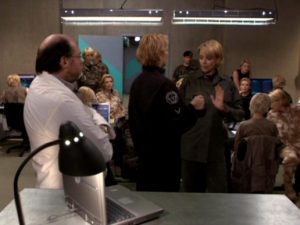 “Ripple Effect” has its fair share of comedy, too … like Carter teasing the rest of SG-1 that she has finally found someone who can keep up with her (the alternate Carter). Mitchell spends some quality bro time with … also himself, who he respects a little more than he should. And after a climactic twist SG-1 has some quippy dialogue with their evil counterparts, as they reveal how they set a trap based on a hunch that the evil SG-1 would attempt something similar. Quite the paradox.

The dramatic core of the episode, however, goes beyond fun and sentimental alternate reality encounters. Many ethical dilemmas are raised as the team deals with a uniquely personal and urgent conflict. About halfway through the episode, General Landry approves a mission to close the reality breach, stranding alternate Fraiser and her team — among many others — in our reality. But Janet’s earth was just infected by an Ori plague, and if she doesn’t return with the cure the planet could face extinction. 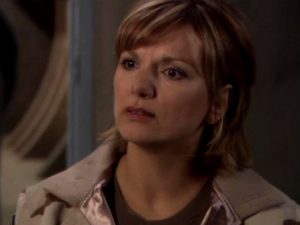 General Landry’s decision seems selfish and calloused. But how many complications would arise if he kept the breech open and allowed her more time? What if he gave the Z.P.M. to the evil SG-1 team? Of course our Atlantis would still function, but it would be vulnerable without the unparalleled power of a Z.P.M., and operatives from our reality would be placed directly in harm’s way. On pure speculation, Landry would be putting people’s lives in danger — people he is tasked with protecting.

Regardless of their motives, these alternate teams are interested in harvesting the best parts of our reality to enrich their own. It’s a dangerous precedent to set, and no alternate team can prove beyond a shadow of a doubt that they’re telling the truth. It’s all the more reason for Landry to stand his ground.

And so tough questions arise throughout this episode. In a time of crisis, whose reality is more important? What is the rubric for valuing human life? Is it ethical to piggyback off your own work from another universe? How are personal lives affected by revelations from alternate selves?

Finally, would our SG-1 plan a cross-reality heist to potentially save the lives of our universe from the Ori … at any cost? 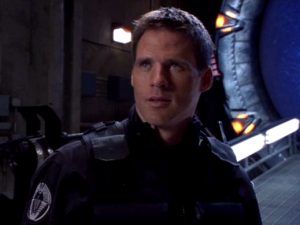 “Ripple Effect” offers concise, thought-provoking, and poignant storytelling at its best. It strikes an authentic tonal balance, covering extensive emotional territory without becoming sappy or contrived. The music is minimalistic and fitting. The performances remind us of why we love these characters — touching on grief, betrayal, morality, and introspection. And who could forget the emotional send off Dr. Fraiser gives Sam, revealing the Carter was absent from the alternate SG-1 as a result of maternity leave.

She doesn’t clarify, but the ambiguity makes it all the more special.

Ultimately, the attention to detail and sincerity of “Ripple Effect” solidifies its legacy in the Stargate universe, landing it a spot on the shelf of beloved SG-1 classics — ripe for rewatch and analysis for many generations to come.