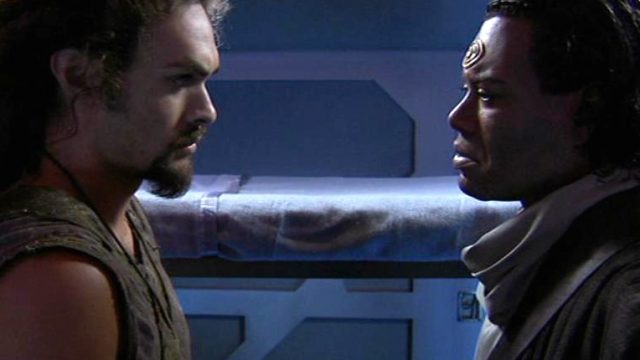 There’s a fine line to walk when writing for a beloved series like Stargate Atlantis. As a filmmaker you want to recognize the fan base and continue to produce what connects with audiences. But you don’t want to turn your show into fan fiction. The stories have to feel organic and balanced — not pandering to the whims of fans.

Season Four’s “Midway” manages to successfully walk that line, offering a dream-team pairing in an explosive war against the Wraith — but more importantly, a story that rings true to the diagesis of the show.

The I.O.A. is conducting performance reviews of Atlantis’ team members, and the new executive, Mr. Coolidge, is far from pleasant. Ronon Dex is up next, and while he’s an impeccable force in the field his socials skills are … let’s just say, lacking.

Worried about Ronon’s performance, Colonel Samantha Carter (now the commander of Atlantis) calls on a Stargate Command veteran to coach the hot-headed Satedan and prepare him to face the challenge of human bureaucracy. To our pleasant surprise, that coach is none other than SG-1’s Teal’c (guest star Christopher Judge). 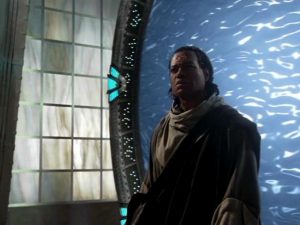 While Carter’s idea is well-intentioned, the two warriors struggle to tolerate one another’s presence — complicated by the fact that they must undergo a 24-hour layover together on the Midway Station as they journey to the S.G.C.

But when the Wraith attack Midway and establish a pathway to the Milky Way, our dysfunctional duo must put aside their differences and fight to prevent an all-out invasion of Earth.

Essentially Die Hard in space (with twice the bad-ass factor) “Midway” is a pretty straightforward pitch — and one that sets high expectations based off its premise alone. Writer-producer Carl Binder delivers an impeccably constructed, airtight script that exceeds even the highest expectations for such a rich concept.

From a narrative standpoint, this is one of the sharpest episodes of Stargate ever produced. Efficient, engaging, and effortlessly cool, “Midway” does not waste any time and jumps right into the story: within minutes, Teal’c is on Atlantis. Shortly after, the Wraith have made an incursion on the Midway Station. Every few minutes involves a significant and engaging plot development — and nothing feels cheap or inauthentic.

It’s a textbook example of how to craft a strong and balanced hour of character-driven action. 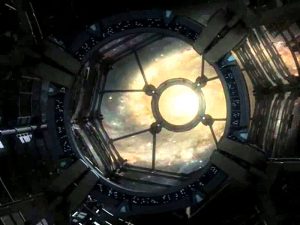 The Ronon and Teal’c arc is intelligently crafted — levitous and playful, but in the end surprisingly profound. Teal’c’s presence on Atlantis quickly brings Ronon’s character flaws and hot-head tendencies to light, and (not surprisingly) Ronon gets defensive about it. Ronon in turn views Teal’c as someone who’s out to get him, rather than help him. He also views Teal’c’s counsel as unnecessary and belittling.

It’s only after these two men successfully defeat the Wraith task force that we realize Teal’c greatly admires Ronon’s passions and his conviction. Instead of trying to fix Ronon, Teal’c wanted to channel the warrior’s unbridled passion into a more disciplined package. Conversely Ronon greatly respected Teal’c, but was intimated by his wisdom and experience. He acted defensively to avoid looking inferior.

Thankfully, the episode ends with both men putting aside their hubris and gracefully welcoming the lessons they have learned from each other.

While “Midway” largely focuses on Teal’c and Ronon’s adventure, there are plenty of other gems in the episode — like the ongoing interplay between the beloved S.G.C. scientist Dr. Lee (Bill Dow) and the regimented, stubborn Kavanaugh (Ben Cotton). Thankfully some of Kavanaugh’s more palatable and productive tendencies are put to use in this episode — and, believe it or not, Kavanaugh finally learns to function as a team player. 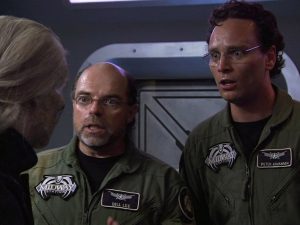 We’re also treated to some classic Sheppard-McKay character moments as they lead a strike force to take back the Midway Station. The battle culminates in an explosive and emotional finale where Sheppard is presumed dead … only to reveal that he survived the vented atmosphere by hopping in a spacesuit. Even though we know Sheppard will likely be OK it’s a tense, emotive, and nail-biting climax.

“Midway” goes out with a bang (literally) and some hilarious poetic justice, as Rodney — typically the nuisance of the group — is driven insane from weeks of isolation with Drs. Lee and Kavanaugh. Sheppard, however, didn’t last so long — sealing himself off in the cockpit of the Puddle Jumper and spending the remainder of their wait in isolation.

By the end of the journey Ronon and Teal’c have come a long way from their initial sparring match (the warrior’s preferred handshake). We feel like we’ve gone on a real, honest journey with these men — and we respect them for it.

Furthermore, I liked how the episode didn’t resort to a binary portrayal of Ronon and Teal’c. Neither one was the villain or the hero, the idiot or the sage. The audience is not told which one to root for, and which one is in the wrong.  Sure, Ronon is an impulsive character. But he’s emotionally accessible — a character the viewer can relate to, and root for. 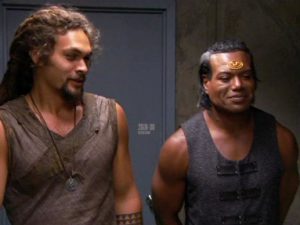 Teal’c, while wise, stable, and patient, can sometimes be aloof and distant — perhaps even intimidating (given his blunt and straightforward demeanor). Both have something to learn from each other, and this episode is more about the forging of a friendship than the taming of the beast.

Ultimately, it’s a shame we were never treated to a sequel to “Midway.” I would have loved to see these two team up a second time. Rewatching this episode made me realize just how much I miss Atlantis and the Pegasus Galaxy, and how the show still had boundless potential as it headed into its later seasons.

Perhaps one day, in a better world, we’ll see these characters team up against the Wraith more more time. One has to hope. 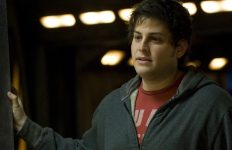 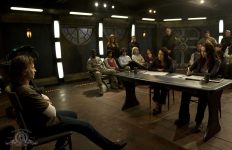 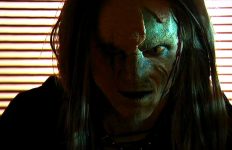 Great episode and great summary. I have to agree episodes like this make me miss Atlantis and the potential the show had.