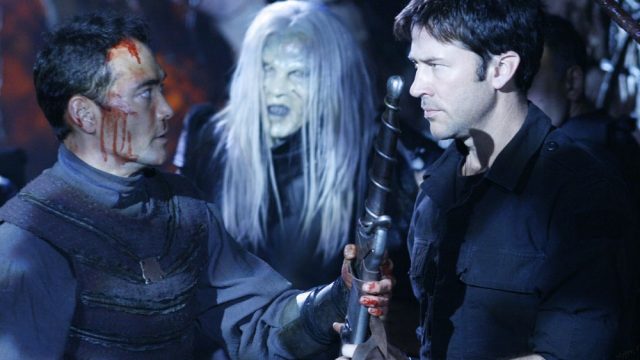 Last fall, I began to rewatch Stargate Atlantis in preparation for the return of Stargate (thanks to the recently announced Stargate Origins). While it was meant to be an informal rewatch — and not official research for this column — I was blown away by the subversive, compelling, and unique gem that is “Broken Ties.” Immediately, I wanted to write about it.

While “Broken Ties” isn’t a traditional fan favorite, it holds up surprisingly well after multiple viewings — and proves that Atlantis still had plenty of creativity and innovation to spare in its final chapter.

On a routine off-world assignment, Teyla Emmagan and Ronon Dex are lured into a trap by Tyre — a Satedan-turned-Wraith worshiper who we previously saw in Season Four’s “Reunion.”  Tyre and his gang of Satedans have found themselves addicted to the Wraith enzyme, and must to continue to serve the Wraith in order to get their fix.

Tyre subsequently releases Teyla but disappears with Ronon, and the trail goes cold.  Our team jumps into action, consulting their network of Pegasus contacts in hopes of a lead. But progress is slow.

Eventually, a disorderly Satedan named Sincha pulls through — providing Atlantis with the whereabouts of Tyre’s hideout on Sarif Sur. A rescue op is launched, but they’re too late. Tyre is on the verge of death — having been double-crossed by his Wraith handler, and now desperately low on enzyme. Ronon is nowhere to be found.

On a distant hive ship the Wraith have begun Ronon’s own conversion process — feeding on him to the brink of death, then restoring the life they took. Again, and again, and again. The torture floods his body with massive doses of the Wraith enzyme, eroding his defiance with each cycle.

And to our surprise, it works. Ronon Dex becomes a brainwashed operative of the Wraith.

Ultimately there is no precedent for this kind of story — specifically when it comes to Jason Momoa’s character of Ronon Dex. And that’s what makes this episode so daring and special. Sure, we saw Sheppard briefly lose his humanity in “Conversion,” and Weir operate as a quasi-enemy of Atlantis in “Ghost In The Machine.” But neither instance taps into the depth of emotion and betrayal that is on display in “Broken Ties.”

Ronon has been converted by a Wraith handler.

The Wraith had long ago taken everything from Ronon — his wife, his friends, his home — yet he still falls prey to their devices.

And while Ronon’s story is undoubtedly the narrative core of “Broken Ties,” the side stories also provide a well-portioned amount of personal drama that helps flesh out team dynamics — specifically with the new base commander, Richard Woolsey.

Woolsey is a confident and decisive leader, but he has yet to truly find his place amongst the Atlantis crew in a broader sense. Beyond the stiffly ironed uniform and dry, calculated tone is a lonely and apprehensive man.  Will our team learn to see him as a friend and confidant, or will he remain the emotionally-illiterate, by-the-book presence which so grated on the nerves of SG-1?

He seems to be pondering these exact questions as the Ronon ordeal unfolds. And his insecurities come to light when he is placed in direct conflict with characters like Teyla.

Having recently given birth to her son (Torren John Emmagan), Teyla finds herself torn between motherhood and her official role on the team. Sheppard shares in Woolsey’s frustration with her indecision, and quickly sours to her lack of certainty. This is compounded by her erratic demands to be a part of the rescue operation … without officially rejoining the team.

Teyla consults Kanaan about her status on the Atlantis team.

When “Broken Ties” first hit the airwaves, I actually wondered if Teyla was going spend more of the season in limbo (or at least appear in a reduced capacity). This was only the third episode out of 20, and it isn’t out of the ordinary for characters in long-running TV shows to take a step back.

Thankfully, Teyla chooses to return by the end of the episode — inspired by the advice of her partner Kanaan, who reminds her of her duty to the people of Pegasus.  She subsequently files an official request to rejoin Sheppard’s team.

While perhaps a sudden and anti-climatic resolution, here we get valuable insight into Teyla, her priorities, her family, and how she means to balance her sense of Athosian duty with the rigid and demanding operations of Atlantis. And her story provides fitting emotional beats that compliment the more visceral, Ronon-centric drama.

“[Tyre] was a good friend. We all are. You’re gonna realize that pretty soon,” Sheppard says — facing the sweaty, pale shell of the man we once knew to be Ronon Dex.

Now in custody Ronon lies in the middle of an empty room, bound in leather restraints, writhing in agony. Lashing out at anyone who dares to approach. Starved of the addictive enzyme.

It is a dark sight to witness. He held on to his Satedan honor and spark of defiance for as long as he could. Now, that spark is gone.

Yet at the same time, I deeply empathize with him.

Drug addition and chemical dependency is a scourge. I’ve witnessed its destructive power firsthand — its unquestionable ability to corrupt even the best of minds. One doesn’t have to travel to the Pegasus Galaxy to witness its effects. Just turn on the news.

Jason Momoa gives a spellbinding and unforgettable performance in this violent episode — respectfully portraying the sensitive source material, and showcasing the early makings of a bankable, blockbuster star.

Joseph Mallozzi and Paul Mullie’s writing also rings true, handling the story with dignity, realism, and tact. The enzyme arc never felt like a cheap narrative device. It was there for a purpose, and it was implemented in a way that resonates.

All things considered, “Broken Ties” is a wonderful summation of what makes Atlantis great: relatable (yet flawed) characters, personal stakes, kinetic action, twists and turns, and the signature Atlantis levity to balance out the darkness (like, say, Rodney in a bathtub).

If you haven’t seen this one in a while, consider giving it another watch. I’m willing to bet it gets even better with age.

I always appreciated the “wraith enzyme” episodes, and the way they treated the characters who became addicted to the substance. I’ve talked to a lot of people, and the general feeling is that *someone* in the production crew knew a lot about addiction and was very open to sharing those issues. At one point I actually showed this episode to a therapy group, to discuss how addiction is handled in entertainment media, and they loved it. This was an impressive end to the series of “addiction” episodes, that started in Season 2, when Ford becomes addicted to the enzyme after… Read more »