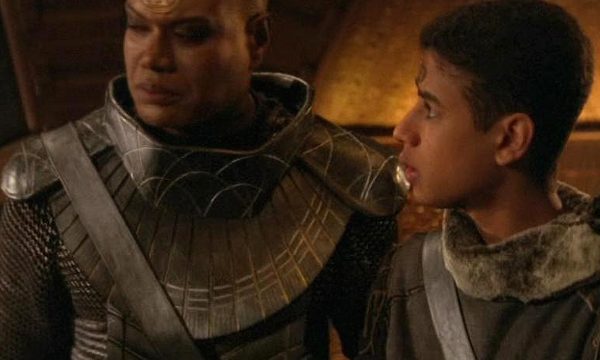 Tragedy reunites Teal’c with his son, who blames him for the death of his mother. O’Neill and Carter launch a risky plan with untested technology when Earth comes under attack by the Goa’uld Anubis … who has turned the Stargate into a doomsday bomb.

Season Six of Stargate SG-1 started a new era for the show: a major cast change (Corin Nemec joins the team as Jonas Quinn), a new network, Earth’s first ship (the X-302), and increasing hints that Anubis had some inside connection to the Ancients.

Rewatch “Redemption” this week! Then post your comments below, or head over to the “Redemption” discussion threads and see what people were saying back in the day. What are your favorite moments?

These were such great episodes. I only watched the first part this week and will wait until GW announces part II. I felt so bad for Jonas. Oneill treated him like crap…well so did Carter. Anubis’s dialogue at the end was really cheesy. Lol. Good episode.

Are we supposed to watch both parts this week or do part 2 next week? LOL

The intention is to do both parts this week. We’ll be moving on to something else next week!

I liked Redemption. I’m still trying to figure out if the Jaffa that captured Teal’c and Bra’tac was the same actor who played the dying Jaffa in Maternal Instinct.