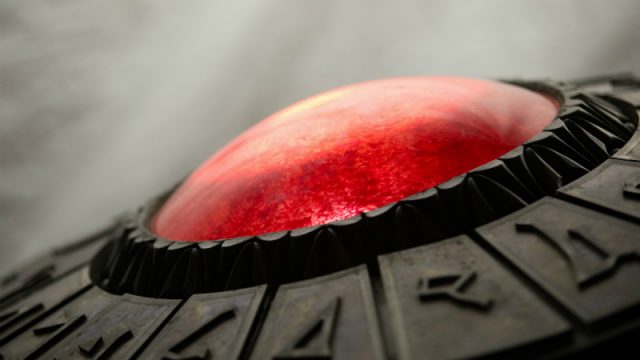 Welcome to Stargate Origins premiere week! With only three days remaining before the new digital series begins at Stargate Command, fans are getting more intel and new looks at the show.

Landing in GateWorld’s inbox today are five brand new and exclusive photos from the set of Origins. Click on a thumbnail below to visit the Stargate Gallery.

The behind-the-scenes photos feature Lincoln Hoppe and the Nazi antagonists; Connor Trinneer’s Prof. Paul Langford; director Mercedes Bryce Morgan with the cast; and the Stargate itself.

Perhaps most tantalizing is a close-up look at the dial-home device (D.H.D.). Of course the D.H.D. did not appear in the 1994 feature film but was rather an invention of the television series, Stargate SG-1. There it was established that the Langfords never found the Stargate’s companion dialing device in Egypt — but that the Germans did come to acquire it (“Watergate”).

Stargate Origins debuts exclusively at StargateCommand.co this Thursday, February 15. Keep up with all the latest news on GateWorld’s SGO news page!