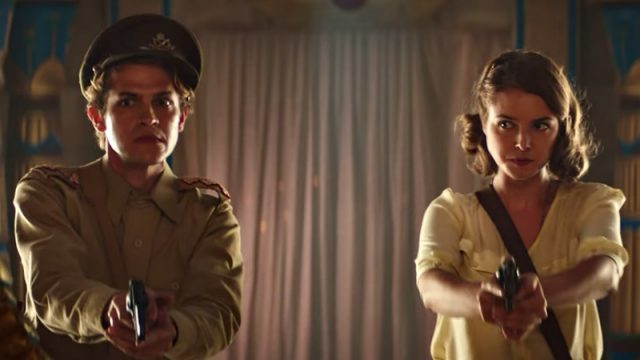 Stargate Origins has finally arrived, with the first three parts of the 10-part digital Web series now available for streaming at Stargate Command.

Averaging about 10 minutes each, the episodes are available to viewers around the world. You’ll just need to sign up for a free Stargate Command account.

The three episodes streaming today is one more than MGM had promised for the free preview. Taking Origins as one big story, these installments make up Act 1 of a three-act movie.

The remaining seven parts will spool out in the coming weeks, exclusive to “All-Access” paid subscribers in the United States, Canada, U.K., Germany, Australia, and New Zealand. MGM has expressed a desire to offer the streaming service in more international markets in the future.

Stargate Origins chronicles the adventures of young Catherine Langford (Ellie Gall), who in 1939 Cairo must rally help from two soldiers to rescue her father (played by Connor Trinneer) from the Nazis. It’s an adventure — to quote the marketing tagline from the 1994 Stargate feature film — will take her a million light years from home … but will it bring her back? 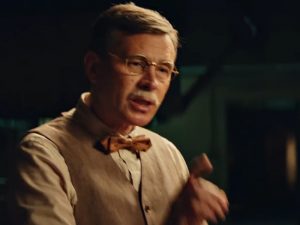 The exact release schedule for Origins has yet to be announced officially, and sources tell GateWorld that earlier reports of two episodes every week may not end up being the final plan. (Curiously, the latest press release from MGM indicates new episodes “at least once a week.”)

We have confirmed that new episodes will continue to arrive on Thursdays. One new episode per week would put the finale on April 5.

The short-form Web series comes nearly seven years after Stargate Universe took its final bow on Syfy Channel, back in May of 2011. Fans hope that an investment in new, live-action content for the 24-year-old franchise could signal more on the horizon.

GateWorld’s full coverage of Stargate Origins continues every week! Talk about the new installments at GateWorld Forum, read our in-depth story and canon analysis (starting tomorrow) in the episode guide, and watch the Stargate Gallery for new photos and screencaps.

@Darren, what is your point regarding the subscription limits?

I mean, instead of the current 2 levels, there could be 3. The free, and two premium. One for people in the US, Germany and the other few countries, and one for all the countries outside of the current restriction. I understand why they can’t stream the old stuff to everyone, but we should still be able to access Origins and the Dialing Home series. Even for half the price, it would mean more money than nothing. They had months to make it work, and they did not.

If it’s the presence of the other shows and films that is preventing MGM from offering All-Access to every country in the world, I’m really not sure why they wouldn’t simply offer a discounted subscription rate that excludes that content in those territories. I suppose it could introduce more problems — confusion over too many tiers, why the other shows weren’t available, etc. And if you’re in one of the eight countries currently covered, would you then want to have the option of an Origins-only pass for half the cost? In that case the studio might think it would lose… Read more »

Spoilers ahead: It is baffling to me that MGM and the people behind this are funding this like it is an unknown story instead of a franchise with decades of multiple profitable shows and legions of fans. This format reminds me of what they did to star Wars in the early 80’s, trying to cash in on the movies with cheap animated series and cheesy Christmas specials. The idea behind this show is great, with a great Indiana Jones vibe, but the acting (especially the boyfriend and sidekick) seems very inexperienced at the least, and the budget must be laughably… Read more »

@MichaelAC I don’t think profit is an issue here. I don’t know how many subscribers they have (@Darren, any info?), but I think it’s only enough to cover the costs of Origins and the new web portal. Continuum and AoT was made from 7 million each, with roughly the same length, and the quality is well, not the same. I would say Origins was made from around or under one million, props and sets included. I would say 50 thousand subscribers (for 20 dollars) is a good guess. And then, I can be completely wrong. This is purely speculation, but… Read more »

I think that’s more or less right. I don’t have any intel on how many subscribers Stargate Command has, but if I had to wager I would guess that MGM won’t be making any money as an immediate return-on-investment. When you add the costs of developing the Web site, maintaining it, and running a publicity campaign, it would not surprise me to learn that what MGM is doing here is investing money in Stargate with an eye toward the long term. Let’s look at the timing here: In the fall of 2016 it became public knowledge that the Devlin-Emmerich film… Read more »

I agree. This is a very logical explanation of what’s happening.

And I will quote your comment on Reddit, with your permission, because many people still don’t want to see the big picture.

Yeah, that’s fine, so long as it’s clear that this isn’t intel but my own speculation based on a bit of armchair knowledge of how the industry usually works.

IMO Origins opens a window. What MGM chooses to do next is crucial.

Of course. It’s my opinion, you have just reinforced it.

By the way, what do you think about Mr. Mallozzi’s recent campaign? Do you think it would be best to bring in the old team or hire someone else with a fresh mind? I think the old team could make wonders with some fresh blood in the writer’s room.

Brad is in the middle of another show that is trying to get renewed, so it may be a little premature to be lobbying for him to come back to Stargate just now. But in principle I’d love to see it happen (along with Rob). However there is the little issue of SGU being as divisive as it was within fandom; that was in part because it was so tonally different than SG-1 and SGA — and that was because the writers had expressed a bit of fatigue with 1997-2009 era Stargate. If they were to come back to head… Read more »