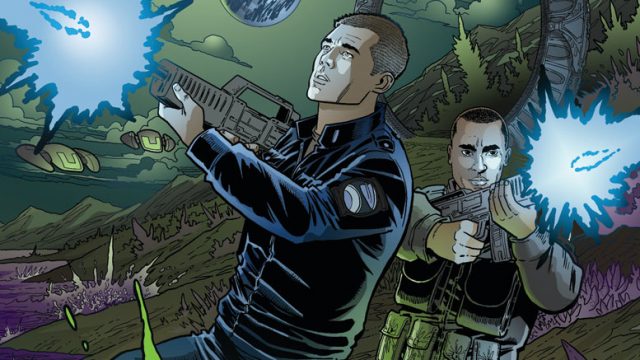 In June of 2017 publisher American Mythology launched the six part comic series Stargate Universe: Back to Destiny — an original Stargate adventure that would resolve the SGU cliffhanger (and series finale) “Gauntlet.”

Now, Back To Destiny is winding down with Issue #5 out of six issues — available on digital markets and comic store shelves this week.

While Back To Destiny isn’t an official continuation of Brad Wright and Robert C. Cooper’s intended story arc it is an officially licensed property developed in conjunction with MGM. Spearheading the SGU wrap-up series are American Mythology writers Mark Haynes and J.C. Vaughn.

“I think writing SGU in comics was special for me not only because I have a great affinity for the show, but because it gave us the chance to bring a sense of closure that we didn’t get from the television series,” Haynes said in a previous conversation with GateWorld. 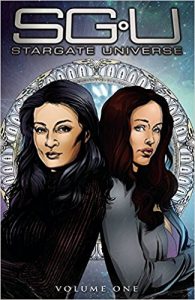 Official cover art for “Back To Destiny” Volume One | American Mythology

Vaughn added that all six issues read in conjunction should feel like “a highly compelling, two-hour SGU movie” — something Brad Wright hoped to produce after Stargate Universe‘s untimely cancellation.

Back to Destiny Issue #5 can currently be purchased for $3.99 (USD) on Kindle and at Amazon / Comixology.

While the release date for Issue #6 is to be announced, a trade paperback of the entire Back To Destiny series is slated for release July 10. Readers can pre-order it now at Amazon.

You can find GateWorld’s review of Back to Destiny Issues #1 and #2 here.