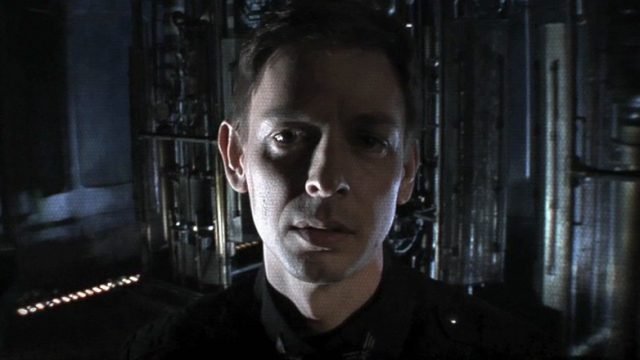 A Sergeant at Earth’s top-secret Icarus Base, Hunter Riley was a key member of the support personnel on board the Ancient ship Destiny after the base was evacuated. Riley was an accomplished technician, and among other things he helped the ship’s reluctant crew figure out how to recharge their devices in a distant galaxy. He was also able to read the Ancients’ language, which helped him to figure out many of Destiny‘s secondary systems.

Hunter hailed from a small town back home, noting that he had several family members who had never left their home state. And here he was, millions of light years from Earth.

Sgt. Riley battled illness and injury during his time on the ship. But when he joined a group traveling to a barren planet by shuttle, it proved to be his final mission. The ship made a violent crash-landing, and Hunter was pinned beneath a collapsed bulkhead. With major internal injuries, he knew that he was going to die. 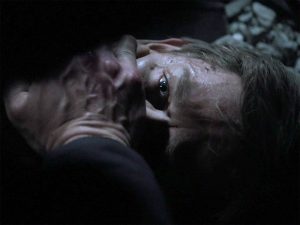 To help his crew, a critically injured Riley is voluntarily euthanized by Colonel Young. From “Aftermath”

But the other crew members refused to leave him behind — risking being left behind when the ship jumped back into F.T.L. Riley’s final act was to sacrifice himself for the good of his shipmates, asking his commanding officer to end his life so that everyone else could get off the planet in time.

After being cast on SGU actor Haig Sutherland kept up his theater commitments during the first half of the show’s freshman season (including a turn as Shakespeare’s Richard II). Fans noticed that Riley wasn’t around much after the first handful of episodes, which was explained by the character’s having been sidelined by an off-screen illness.

What is your favorite Riley moment? Post it below!

His death was the toughest to watch of any character in all three SG series. Such a sad moment. Made me cry more than Carson’s death in SGA. And it really wrecked Young.