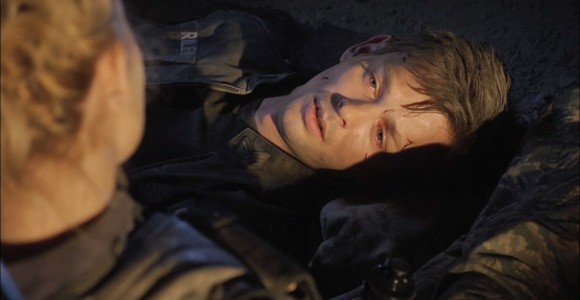 Dr. Rush directs a shuttle to a planet inaccessible by Stargate – but a crash landing threatens to strand those on board. Meanwhile, Rush makes a stunning discovery on Destiny, and Young must decide what to do with his prisoners.

Nightmares of torture suffered while in the hands of the Lucian Alliance ("Subversion") waken Dr. Nicholas Rush. Rising, he stops by the Control Interface Room. He pauses long enough the fix a system problem for Dr. Lisa Park, and then walks deliberately through the ship's corridors – ending up beside a massive, blast-like door. It protects an ornate set of traditional doors which open onto Destiny's Bridge. With the push of a button, light illuminates the central command chair. The entire room shifts upward so almost the entire length of Destiny stretches before the windows. Rush has made a life-changing discovery.

Sitting in the command chair, Rush consults his ever-present notepad. A voice congratulates him on finally finding the master code for controlling all of Destiny's systems. He stares at his deceased wife, Gloria ("Human"), who slyly observes that he has no intention of revealing his discovery to the others.

In Camille Wray's quarters, MSgt. Ronald Greer stands guard as Wray talks with a Lucian Alliance scientist, Ginn. She reveals that the Alliance pursued the ninth chevron project ("Air, Part 1"), believing it would make them as powerful as the gods, perhaps giving them control of time and space itself. Suggesting the captives could be helpful, Ginn also complains about meager food allotments. But staples are always in short supply on Destiny.

Wray tries to discuss the fate of the prisoners with Colonel Everett Young. When she mentions that intelligence suggests the Alliance back in the Milky Way might be planning an attack on Earth, he confronts her. Destiny can't sustain the prisoners for the long haul; he intends to leave the prisoners on the first viable planet.

Meanwhile, Rush studies displays and controls on the Bridge. Gloria questions him at every turn. He suspects there is a real-time subspace link between Destiny and the Stargates, which dictates why the ship stops at some planets and not others. Keenly aware of the need for supplies, and puzzled by the classification of a nearby Stargate as non-functional, Rush ignores Gloria's warnings. He drops Destiny out of F.T.L. flight to stop at the planet.

As Eli Wallace, Adam Brody, Sgt. Hunter Riley, and Colonel Young discuss why Destiny stopped at a planet with no Stargate, Rush arrives and tells them that the planet's gate isn't working – but they can reach the planet by shuttle. Lt. Matthew Scott, Lt. Tamara Johansen, and Vanessa James along with Greer, Eli, Dunning, Riley, Park, and Dr. Dale Volker take the shuttle planetside.

Rush returns to the Bridge to monitor their approach. Gloria worries about Rush's lack of sleep. Re-enforcing this, the vanished Dr. Franklin ("Sabotage") appears. Franklin warns that Rush can't do this alone – he has overlooked important information. In particular, he didn't notice the super-rotation in the planet's atmosphere. Rush alerts Scott that they are in for a rough ride when they hit the atmosphere.

The shuttle withstands the turbulence only to experience a catastrophic power failure. Now a difficult-to-control glider, the ship grazes a mountainside and stops when it crashes into a sheer rock face. Only Riley is hurt. His legs are pinned beneath the staved-in shuttle and the rock which collapsed on it.

Eli pries open the ship's back door. With less than six hours on the clock before Destiny jumps away and leaves them stranded, Scott dispatches most of the team to find the Stargate. He, T.J., Park, and Dunning stay to deal with Riley. The Sergeant can't feel his legs. When they try to free him, T.J. realizes that the pressure from the wreckage is all that prevents him from bleeding to death. There is nothing she can do for him.

Greer locates the Stargate, buried upright by a rock slide – but it is too late. Eli's remote has detected that Destiny has jumped away. While the team clears the debris (hoping Destiny might drop out of F.T.L. still within the gate's range), T.J. comforts the dying Riley. She confesses her experience on the obelisk planet ("Intervention") and shares her hope that her baby is still alive. (Lisa overhears them talking.)

Back on Destiny, Young and Wray respond to a riot in the prisoners' hold. As his men contain the fight, Young pins one prisoner and repeatedly bashes his head on the floor. Camille witnesses the bloody outburst. Colonel Telford pulls Everett away. Even though the I.O.A. wants the prisoners kept on board, Young later tells their leader, Varro, with no uncertainty that all the prisoners will be left on the next viable planet they can find.

Still on the Bridge, Dr. Rush wants to stop the engines – but they must operate a minimum of four hours while at F.T.L. speed. Unfortunately, there is no Stargate on their immediate heading to justify a drop-out. Gloria chides him for not asking for help, for not being truthful. Rush launches into a diatribe about Young's lack of fitness to command this mission.

Also concerned about Young's fitness, Telford contacts Homeworld Command. They've ordered a list of specific prisoners, who may prove valuable, be kept aboard. Telford presents the list to Colonel Young, and Young suspects that his superiors on Earth have authorized Telford to take command if Young disobeys.

When Rush does drop Destiny out of F.T.L. flight, he blames the effects of the pulsar's radiation for the short trip ("Incursion, Part 2"). They dial the address of the planet. The ground around the newly exposed Stargate vibrates, but the Stargate doesn't engage. Eli tries to dial and the Stargate responds. After reporting in about Riley and the crash, Scott returns to the planet with Young.

While the others wait outside, Young enters the shuttle wreckage and talks privately with Riley. Both men know that Destiny's clock is ticking, and that if it comes to it T.J. will refuse to leave her patient to die alone. Aware of his situation, and in pain, Riley begs Young to help him die quickly. Reluctantly, Young pinches Riley's nostrils shut. His other hand covers Riley's mouth, suffocating him.

Before Destiny resumes her journey, most of the Lucian Alliance prisoners are left on the planet. Varro, Ginn, and Simeon, along with half a dozen others, remain aboard. Afterward, in the Mess, many toast Riley. But Everett Young drinks in private, trying to drown this new sorrow. Eli watches the personal kino recording Riley made ("Darkness"). Rush shares his guilt with Gloria, but soon spots something else ahead on the display monitor.

Destiny drops out of F.T.L. again. Dr. Rush summons Brody, Volker, and Young to the Observation Deck. Eli invites himself. In the panoramic windows they see a large, unidentified object. Destiny is headed straight for it.