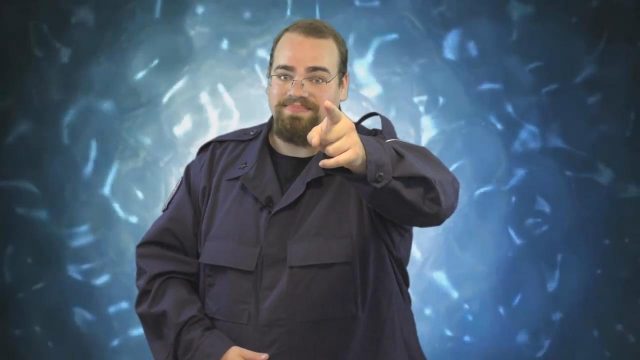 “What the hell am I doing?”

That’s the first thought that struck my mind when I walked onto the stage at Wondercon 2019. Public speaking is not a new practice for me, but talking to people from a stage about Stargate is very new.

Writing articles about how Ra is an Asgard, or making videos about how Ronon’s gun works, or how the Ancients are idiots is still a new experience. Five years ago, I wasn’t dreaming about being a global influence in the Stargate community or working with MGM — I was just trying to get through my finals in college and pass my classes. 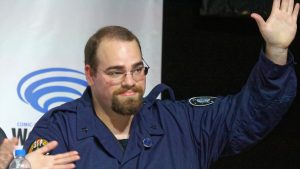 Looking back, however, I can see how even that was influenced by Stargate. The franchise had been the invisible hand that helped shape my life (like it has shaped all of us fans, to an extent). But now, thanks to The Stargate Guy channel and my interaction with the fan community, I’m proudly able to stand up and tell everyone on a weekly basis …

Like a lot of us, I was introduced to Stargate in a simple and relatable fashion — sitting on the couch watching TV with my dad. My father worked a lot to provide for six kids, and when he wasn’t working at the dental office he was in the wood shop building cabinets for people (or remodeling the house for the tenth time).

Unlike my brothers, I quickly realized that I did not enjoy physical labor. Instead of bonding with my dad over fixing a car or creating something in the wood shop, we bonded by sitting on the couch and watching our favorite television series. Even though he was a “manly” man, he also had a geeky side. So we watched a lot of sci-fi.

One evening, I walked into the family room to find him watching a show called Stargate SG-1. I don’t remember the exact episode, but I remember watching several people in uniform shooting a bunch of aliens who were wearing silver armor, and who couldn’t hit the broad side of a barn. Overall, I thought it was cool. I mean come on, what young boy doesn’t like explosions and shooting the bad guys? By the end of that episode, I wanted to watch another. 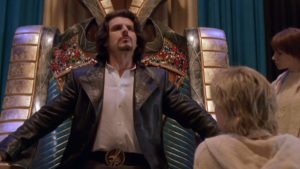 The next episode we watched focused on the history and archaeological side of things, namely the tracking down of Seth. I already loved anything to do with history, so I lapped that up. And after the episode ended, I asked him more about the show … and it turns out he had the original Stargate movie and the first season of SG-1 on DVD!

Why the hell didn’t he tell me about this sooner?! Didn’t he know that I would love this?

For the next several years my dad and I would watch Stargate SG-1, Atlantis, and Universe whenever they were playing on Syfy Channel. And whenever a new season came out on DVD, we would buy the box set and I would re-watch the season with the commentary and all the behind-the-scenes footage.

I found myself becoming interested in the filmmaking process, and I learned a lot from the behind-the-scenes features and listening to Martin Wood, Peter DeLuise, Brad Wright, and everyone else on the commentaries. 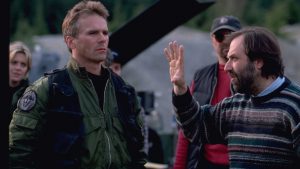 Watching how Stargate was made was sometimes as fun as watching the episodes themselves.

During all of that time, I only had a vague awareness of the Stargate fan community. I was rather envious of the people who were able to apply for the “Get in the Gate Sweepstakes” and got the opportunity to be on the show.

I also watched a featurette of Christopher Judge (Teal’c) talking about his first Stargate convention in Vancouver. My dad and I talked about how cool it would be to go there and meet the people who actually made the show — but we had no money to spare, so it was an impossible dream. (Being a poor kid living in a trailer park sucked at times.)

After I had gone off to college I invested in a cheap camera, and started to make YouTube videos in my spare time. I wasn’t studying film or television because everyone said that was impractical, but it was fun to learn as a hobby. A few years later I became more serious about my videos, so I developed a YouTube channel about how it’s alright to be a man and a geek at the same time.

I didn’t talk about Stargate at first, since I thought it was just one TV show and didn’t really have much of an affect on my life. I didn’t realize it until a few weeks before my last year at college started, when I was visiting my parents back home. But one, single day would change the rest of my life and my perspective on Stargate. 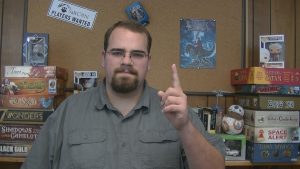 Without warning, my mom and sister walked through the door of my parent’s home in the middle of the afternoon to tell me that my dad had died of a heart attack while installing a water heater by himself.

When I got back to school, a thousand miles away from my family, I found myself watching Stargate more. I realized that Stargate reminded me of the times Dad and I spent on the couch talking about physics, history, military strategy, and theories about the show and characters. It was then that I realized how much of an influence Stargate had really had on me.

I also recognized Stargate as a factor of influence when I was picking out what to study in college. Dr. Daniel Jackson was part of the reason why I was about to graduate with two bachelor of science degrees in History and Anthropology with a Museum Studies Certificate. I remembered that I re-watched the behind-the-scenes footage of Stargate when starting to make YouTube videos. I had been thinking about that footage when I bought the camera.

I realized that no one was making recent videos about Stargate on YouTube, and decided that needed to change. 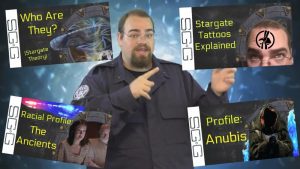 By popular demand, “The Stargate Guy” channel was born.

So I pulled out my camera and started producing videos about my Stargate theories — sharing similar conversations that I had with my dad while sitting on the couch watching the three Stargate series. Quickly, those Stargate videos became the most watched on the channel, and I was commenting back and forth with Stargate fans from around the world who wanted to share their ideas and theories. I was talking to people that I would have never met, tapping into a global community that I did not realize was there!

People started asking me — or rather begging me — to create a channel that was all about Stargate. This would start not only a new chapter of my fandom, but also of my life.

On October 1, 2017, “The Stargate Guy” YouTube channel was born. Since then I have made over 100 videos about anything and everything Stargate (and have talked with literally thousands of fellow fans from around the world).

One year later — and with the encouragement of a few subscribers — I was in Vancouver attending Gatecon: The Invasion and interviewing the cast and crew of Stargate! I was able to sit down and talk with people such as Cliff Simon (Baal), Rainbow Sun Francks (Lt. Ford), and director Martin Wood — truly fulfilling a lifetime dream. Just thinking about it brings tears to my eyes. 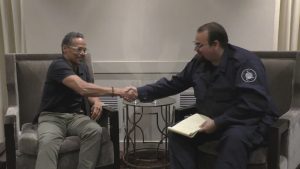 And during those interviews, I could feel my dad watching, sitting in the corner and smiling.

I was also fortunate enough to go to several Stargate filming locations during my trip. And I met wonderful people like Darren Sumner here at GateWorld, David Read, Jenny Stiven, and Kieran Dickson from Stargate Command, as well as many Stargate fans … and even a few of my subscribers! I was enthralled to see people from several countries and various backgrounds all sitting in one place talking about something that brought them all together. It was unusual and exciting to see people have intelligent arguments and disagree, but still be able to part ways as friends.

I became convinced that Stargate brings people together in a special way.

In early 2019, I entered and was accepted to be an advisor to MGM as a “Superfan Panelist.” I was able to go to Wondercon 2019, where I met with my fellow panelists from around the world and get to know how cool they really are — and how much Stargate has impacted their lives, too. I was at the Stargate Command booth for most of the weekend, talking with people about the show and meeting some more YouTube subscribers. 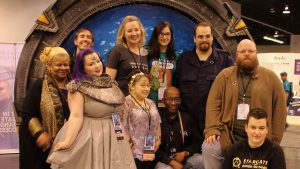 So there I was — walking up on stage at Wondercon. Talking to fans from around the world about the franchise. Thinking how amazing it was that I was there, and how amazing a franchise is.

It has affected my life, and the lives of millions of people from around the world, in a big way. I am convinced that Stargate brings people together, and I feel very lucky to be apart of something so profound and unifying.

Not Just A TV Show

On occasion, I get comments on my videos that say something like, “It’s just a TV show! It’s not real.” Well, I have seen the lives of thousands of people affected in a real way because of Stargate.

Some have chosen to become engineers, scientists, or to join the armed forces. Some have used it has a healing tool. And I myself have clearly been affected for the better because of Stargate — without even realizing it at the time. And I have grown closer to my dad before and after his death … because of Stargate.

It’s not just a television show. Stargate is a vehicle that helps to mold and shape lives. It is not just a form of entertainment, but a means of bringing people together — father and son, husband and wife, or people from all around the world. TV shows that are “just a TV show” do not do these things; they fade off into the night and are forgotten about.

But Stargate has been around for 25 years. And even though it has been off the air for almost 10 years, it is still having a lasting and meaningful impact. And it will come back. It’s only a matter of time. 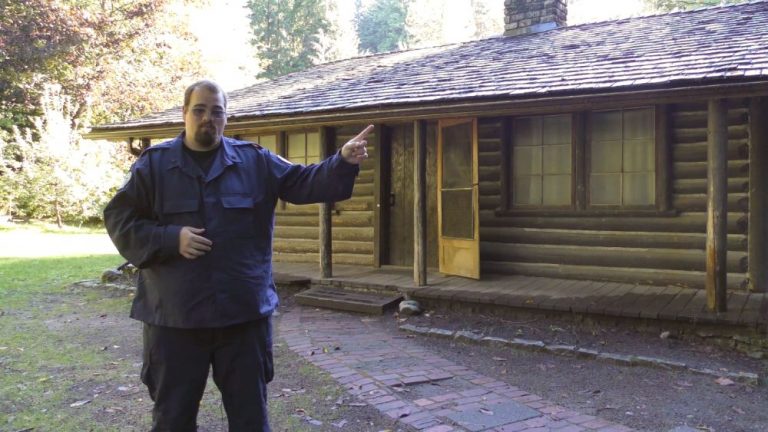 The Stargate Guy visits Jack’s cabin during his visit to Vancouver, British Columbia.

Taylor is from Oregon and has been a fan of Stargate since watching on the couch with his dad. He has a weekly YouTube channel called The Stargate Guy where he talks about anything and everything Stargate. 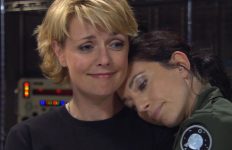 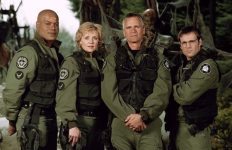 I really enjoyed reading this article by Taylor. As a friend of his and fellow YouTube creator I can relate to his experience becoming the part of something more than “just a TV show.” He is a very humble person and I really admire him for what he does. He’s objective, informative, entertaining and fun… a real down to earth geek. I’m really proud of him and his achievements and I truly hope that he will continue his work the years to come. Live long and prosper my dear friend. 😊🖖