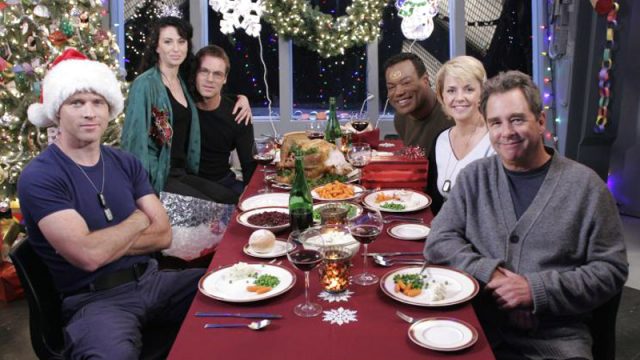 Every day this week we are counting down to the 25th anniversary of Stargate (1994), with “Finding Fandom.” Today Jacqueline looks at the global family that this franchise has created.

The Stargate franchise is not just a collection of TV shows, and its reach extends far beyond the studio lot. For both the casts and crews of the three shows, and for the fan community at large, Stargate is a family.

There is an entire community – or family – behind-the-scenes, located all over the world. So far this “Finding Fandom” series has thrown the spotlight on the fan base — the people and their stories of how Stargate has touched their lives. Yesterday, for example, we touched on how certain experiences within the fandom, such as conventions, have helped to change and save lives.

THE TIES THAT BIND

“We were a team, Teal’c. No one can even begin to understand what we went through together, what we mean to each other.” – Samantha Carter, “Revelations” 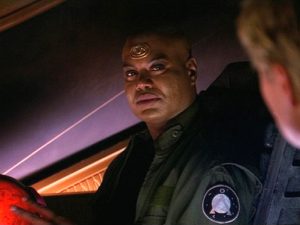 Teal’c and Sam bond in the fifth season finale, following the loss of one of their own. From “Revelations”

This line is one of my favorites throughout SG-1’s run, partly for the pure passion and the unwavering tone Sam uses. She is adamant as to what the team means to her — what each member of the team means to each other. And this unshakable bond is not dissimilar to the one that brings the fans together too.

Whether it’s been through a parent, partner, or best friend a lot of us, it turns out, have those closest to us to thank for our introduction to the series.

“I was introduced to Stargate a long time ago, but I remember my husband getting into the show while we were dating,” TiCwriter told me. “So it’s got a bit of a romantic nostalgia to me.”

“I’ve been watching SG-1 since it started, but it was my hubby actually got me hooked on it,” added Houghtam.

“Back in 2009, I had several friends who wouldn’t stop talking about Sanctuary [which was just starting its second season],” AngieVonAsgard said. “So I checked that out and totally fell in love with Amanda. So thought I’d check out Stargate SG-1 – which also had my childhood crush MacGyver in it. The rest is history. I devoured the entire show in less than two months and it’s been one of my main fandoms ever since.”

“A friend introduced me to Stargate SG-1 in August 2012,” samismymuse recalled. “We watched the episode ‘Children of the Gods’ and I was instantly hooked.”

Others were introduced to the show by family members. “I was introduced to Stargate by my dad,” said necoffin. “He was a fan of Richard Dean Anderson, so when he saw that he had a new show out, he started watching it. Before we knew it, the whole family was hooked.” 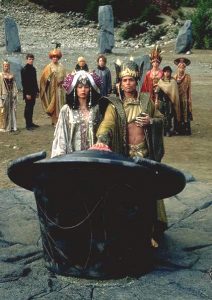 “Children of the Gods” is where it started for many fans

“From the day I was born, I’ve watched it with my mum,” Sammyyflowerr said . “We’d sit down every Friday night as I was growing up to watch it.” TC_Ravenclaw was also introduced to the series “back in 1997/98 when it started on Showtime. My mom liked it and asked me to watch it, even though I was living away from home.”

“I remember when the original Stargate movie came out and I was hooked,” added stacypa42041454. “I love history and archaeology and Egyptian history, so the premise drew me in immediately. My family and I are all sci-fi geeks, so we all fell in love. We were hoping for another movie until I happened to find the series shortly after it started. We’ve watched faithfully since then.”

I think that’s part of Stargate’s appeal, too: not only is it the perfect premise for a sci-fi show — with good writing and likeable characters — but it is a show that crosses generations. It delivers content that the entire family can watch and experience together; that friends can recommend to others within their social circle; and that enables strangers to use fan-related forums to host their own re-watches.

There’s just something about Stargate that brings people together and allows them to enjoy it freely.

This act of bringing people together and sharing a common interest is key to what a fandom should be, but to many it also means more than simply “being a fan.” For some, finding the show and being a part of this group has provided them with the opportunity to travel the world and meet not only the actors but their fellow fans too.

“I love the friendships I’ve made following Stargate,” clairec007 said — “plus the countries it has taken me to, from Canada, Belgium, and Germany, to Italy and the USA.” 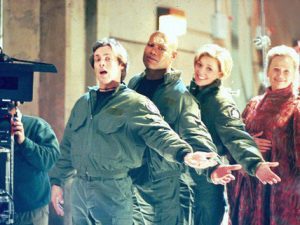 Behind the scenes on Season Two’s “Prisoners.” The fun and friendships on Stargate start on the set — but they go far beyond.

“I’ve met amazing people,” CinkaLucifer said. “I’ve traveled to places for cons I never imagined I’d go. I have friends all over the world thanks to Stargate. It’s the only show that’s made all of this for me.” Another fan who has traveled significantly is samismymuse: “I’ve traveled to conventions in several countries (since none are held where I live), and made some great memories.”

A number of responses from fans around the globe also highlighted the unique friendships they have made because of the franchise.

“Fandom has given me friendships and new experiences,” LetitiaTHELemon told me. “It’s helped me grow as a person, helped me conquer my fears, and changed my life.” Lisuni agreed: “You really find friends for life. When my mom died, a few days later I received flowers from friends from several countries. That’s what really keeps you in. The people.”

“It’s amazing that a show over 20 years old has brought people from all over the world … ages, races, nationalities, beliefs,” sg1on said. “We can have genuinely good times together just talking about a television show. I’ve made so many good friends through Stargate, and it’s amazing how accepting and exceptional the people in this fandom are.”

“It’s being able to share your love [of the show] with like-minded individuals,” added bluewaterishome. It’s an opinion also shared by vinstry: “Discussing theories or my favourite ‘what ifs’ with other like-minded people is just amazing. This fandom was what kept me busy and sane while studying for university. It gave me an escape and, in some ways, it still does. It feels like one big happy family instead of just a group of fans.” 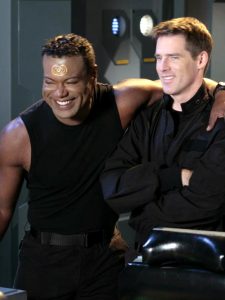 Stargate’s relationships started on the set — but the family widened to include fans, as well.

“Fandom is a community of like-minded people who love the same show that I do,” MissRainbowPie said. “It gave me real friends. Growing up, I never knew anybody who liked sci-fi, except my parents. Even now, I don’t have good friends (in real-life) because we just don’t have the same interests. But the Stargate fandom and others have given me friendships that have lasted a long time – some for more than a decade now.

“These friendships are so incredibly important to me, and I’d be lost without them.”

Others also went on to praise the friendliness they’ve experienced, including VCThomas16: “I was pleasantly surprised at the warm welcome I received at Gateway [a Stargate convention in Chicago]. I was scared that, as a new fan, I wouldn’t be viewed as a ‘true fan’ but rather just a newbie – [but] that was definitely not the case. Everyone I met was very welcoming and willing to talk about any and all aspects of the movies and the series. What made the experience so much better was that I met some great people that are now friends.”

“I’ve been in – and I’m still in – a lot of different fandoms, but the Stargate fandom is by far my favorite,” carterisawesome said. “I entered the fandom during my first year of high school and I’ve met so many people that I would never have known otherwise. I’m so grateful for that. My SG friends gave me strength during a period of my life where I didn’t have any. I’m sure they don’t even know about it, but I’ll always be grateful to be a part of this incredible fandom.”

Out of all the responses I received, however, the one word that appeared again and again when I asked fans what “fandom” meant to them personally was the word family. And it’s actually a really moving – and accurate – definition of this group of people and what they mean to each other. 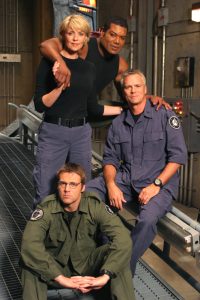 “I found FCD Events in 2015 and have been part of their family ever since,” MamaNoxErika said. “I became such a family member that I became part of their management team and I help organize the events. I try and put myself in any Stargate group I come across. I have made lots of friends and made lots of beautiful memories through being part of this fandom. But, most importantly, it gave me back my life.”

“I’ve many friends who I can really count on — but they’re not my friends, they’re family,” added SeverinaClbt. “I can’t picture my life without them.”

“It’s an extended family,” another fan earnestly shared. “It doesn’t matter if you’re having a good day or a bad day, it doesn’t matter if you ‘ship the same couple or disagree over your favorite episodes. It’s just really nice to know that there is a place you can go, people you can rely on, when you need them. It’s fun and serious and everything that a family should be.”

“Fandom means love and sharing admiration for the same actors / shows / characters,” Larkistin89 concluded. “I’ve seen the darkest sides of fandoms, but also the brightest. I’ve found friends for life, and it should be about people helping each other and, maybe, even make miracles happen (like helping someone to meet their hero). A fandom can be a positive force.”

And it is this positive force; this army of dedicated and friendly fans, that has been instrumental in keeping Stargate at the forefront of the sci-fi genre.

I love it that I can share most eps with my nine yr old grandson. Another scifi fan in the works!

I am sharing the experience with my non sci fi wife and daughter of 15 and 12 year old son. They love it. Especially my non sci fi wife. We are at Season 4 now. My wife ranks SG1 characters like this; O’neil, Jackson, Tealc, Carter. My daughter is: Tealc, Oneil, Carter, Jackson. And my son is O’Neil, Tealc, jackson, Carter

Ms. Purse, I am hooked on your well written articles! I couldn’t be considered a fandom but you have certainly opened my eyes and educated me. We have enjoyed every show we have watched and rewatched! What touched my heart, these fans have individually come together and have found long lasting connections and become close friends. Who would have thought a loved TV show could bring the world together. We need to come together in love and friendship, over coming boundies, politics and different cultures. Thank you for opening my eyes and heart! Well done!