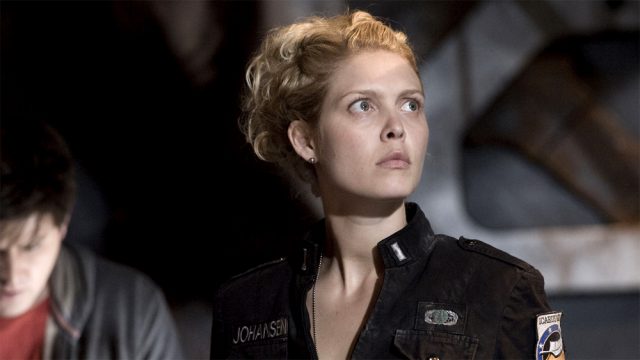 Stargate Universe was a different kind of Stargate show when it premiered in October 2009. It came on the heels of 10 seasons of Stargate SG-1 and five seasons of Stargate Atlantis — the latter of which was cancelled prematurely. SGU took a more serious approach to storytelling, following the sorrows and momentary joys of a crew trapped on a derelict alien ship millions of lightyears from home.

As has been documented on this site in years past, while many long-time Stargate fans embraced the new take on the franchise the young series also faced an intensely negative reaction from others. The characters on the screen, as it turns out, weren’t the only ones suffering: members of the cast were also made targets of viewer outrage.

SGU‘s Alaina Huffman spoke about her own experience in a new interview with SideWalks TV. She played Lt. Tamara Johansen on the series, which ran on Syfy Channel in the U.S. from 2009 to 2011. 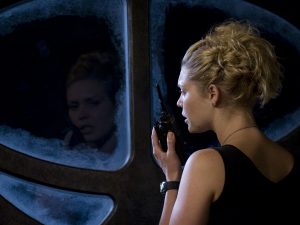 “We weren’t very welcomed into the Stargate community,” Huffman said. “We got protested. People were picketing our studio. I got spat on. People were like, ‘Go home, bitch! We hate you!’ And was like, ‘I just want to feed my kids.’ It was a bit of a slippery slope.”

More recently, though, she said that fans who once opposed the show have spoken with her about finally giving it a chance. “More so now, ten years later, people are like, ‘Oh, I actually watched the show and I really like it. I didn’t want to like it; I protested …'”

In spite of the producers’ plan for a 5-year story, as well as their long track record of delivering quality content and a devoted fan base to Syfy Channel, Stargate’s third live-action TV series didn’t make it past its second season. And while ratings were certainly a challenge in 2010 (and the network made the ill-fated decision to move the show out of its popular Friday night block, in favor of pro wrestling), Huffman believes the numbers were not the sole reason for SGU‘s cancellation. 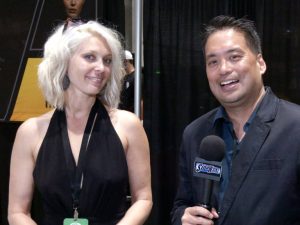 “We didn’t get cancelled because the ratings were bad,” Huffman said. “People were watching it. … We got caught up in this trifecta, this perfect storm: MGM that year was filing bankruptcy. Syfy was rebranding, and they did a lot of reality content after they cancelled our show.”

She’s right on both counts. MGM filed for bankruptcy at the end of 2010, right when the network was choosing to cancel the series. And after SCI FI rebranded as “Syfy” in 2009, its programming choices and media interviews with executives made it clear that the channel was hoping to appeal to a broader audience by steering away from traditional, hard science fiction.

Huffman also suggested that putting the show on an online streaming service was floated as a possibility, but here too the timing was not right. “The creator[s] of the show, Brad Wright and Robert Cooper, had at one point (prior to doing it with Syfy) thought about streaming — like going straight to Apple,” she said. “But it was just too premature. It was before Netflix was doing anything streaming; it was before Apple was actually making content.

“So yeah, it ended. And I moved on, and everyone else has moved on.”

“Stargate was like a dream show,” Huffman said. She also noted how well the job fit into her life, with young children, when she won the part a decade ago.

“Honestly, one of my main reasons for signing on to it was — [first] it paid what I wanted (that’s a good criteria for taking a job!) — and we were stuck on a space ship,” she said. “So when I read the script … I was like, ‘I’m going home at 7 p.m. on Fridays!’ Because we work really hellish hours and I have four children.” 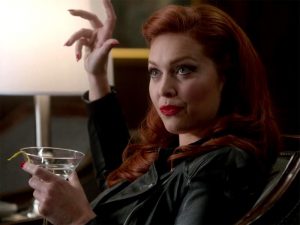 Alaina played Abaddon, the “Queen of Hell,” on Supernatural.

Looking back on the series today, she suggests that viewers go back and appreciate Stargate Universe for what it is.

“It’s a really good show,” she said. “If you haven’t watched it, honestly I suggest watching it. Any show that you watch, it takes a minute to get its grove. And I just think there was a negativity to begin with. But if you go back and you watch it unbiased, you’ll really enjoy it. It’s a really well-written show. It’s beautiful.”

“It was a great show to work on. I’ve made life-long friends, I’ve traveled all over the world and met fans. I’m very proud of it.”

Alaina also talks about her start in modeling and on the SCI FI Channel show Painkiller Jane, as well as her work on Smallville (where she played Black Canary) and Supernatural (as Abaddon). She also talks about developing new projects, the actor’s grind of auditioning for jobs, and discovering X-rated fan fiction written about her characters.

Since the interview was conducted, Alaina was cast in a recurring role on The CW sci-fi drama The 100.

Check out the complete, 17-minute interview at SideWalksTV.com. (Alaina talks about SGU starting around the 7:00 mark.)

Thanks to Richard for the tip! 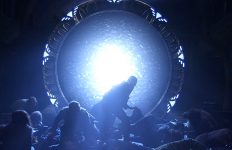 Thanks Darren for mentioning our “Sidewalks Entertainment” interview. As a Stargate fans myself, I’m glad the other fans can watch it. Great job on the article write-up. I will let you know when I have our Joe Flanagan interview ready. — Richard

So the time wasn’t right to go to streaming back then. I bet it would be now. I’m certain I speak for a large swath of the fan base that wants Stargate back!

I liked it from the start, and was stunned to see the vehement reaction from a fan base from which I would’ve expected more open minds, but instead a large portion proved themselves a rabid cult of irrational anger, esp as evidenced by their treatment of an actress who didn’t control a god damned thing about it. 😟 Still wish we could at least get a couple movies to complete the cliffhanger.

Please come back…i watched SGU for the first time this month and I really want more!!

Personally I enjoyed SGU right from the start and was disappointed when it ended. I watched every episode more than once and kept hoping for its return. It was different than the other SG series but still had me at home in time for the new episode every week. With any luck a SGU movie could bring it back or provide closure to the series.

Wow. Hard to believe fans were being assholez like that. I admit it took me a few episodes warm up. Either way it was a terrific show. I hope we can get a couple movies or more. Still sorry to hear of alainas bad experience

The show seemed to be more of a Soap Opera to me. Military discipline thrown out the window.

That is to bad for the actors/actresses who tried to bring us another great stargate series., to have to go through what they did… I believe and it’s an opinion, that individuals who gave such a negative reaction were not true fans. I loved it, how they involved stargate command and Richard dean Anderson. All of it was great… very sorry that it was cancelled. I am just wrapping up Atlantis moving on to SGU. I would really love it if they would consider returning to continue the series. Have watched all stargate movies and series multiple times.. Never gets… Read more »

I loved SGU from the start, and although I was disappointed when it ended, I thought the last show was one of the best series finales ever

At the time SGU came out I had already started growing skeptical of the Sci-Fi Channel and was a little worn out on the Franchise (SG:Atlantis was OK but never really gelled with me). Nonetheless, I gave SGU a chance and was quickly taken by the quality and different tone of the show. It became and remains my favorite of the franchise – i rewatch both season regularly perhaps about 2 or 3 times a year. I was appalled at the character of the negative reaction this show got from a certain segment of the fan base when it was… Read more »

SGU was definitely a different stargate show. It had a darker spin on things, but had a lot of potential for stories. It was cut too soon…should be revived.

SGU took the Stargate franchise in an exciting new direction; I hated the infantile backlash from some fans at the time, though it’s nice a few have come ’round to realize the franchise was headed in the right direction. The cast was stellar and producers were smart to sprinkle some Stargate veterans in cameos and story arcs throughout the 2-season run (but Daniel and Teac got a bit of a short shrift IMHO). It was clear that SyFy execs weren’t supporting quality science fiction in favor of ghost shows and wrestling; colossal mistake, as I never watched anything on SyFy… Read more »

You spit on somebody just because they are an actress in a TV show? You need extra-strength professional help.

i think Universe was amazing….and it was exactly the right kind of Stargate for me. when i first fell in love with Stargate it was the movie and while SG-1 and Atlantis were good, there was something “missing”…it was that deep rooted exploration, the discovery of the unknown that i saw in the movie that drew me in to SGU. it wasnt about what bad guy they can blow up this week, or what general or authority figure they could cheese off, wasnt about the latest “new discovery” episode…SGU was the most realistic of the series, in fact, it could… Read more »

Alaina was perfect, but SGU is very grim and full of psychopaths so no wonder it attracted alike.

For me, i did not like the SGU show and still don’t, i was never able to get past the first season. It is not only a bad Stargate show but it is a bad TV series in general.
However, I REALLY LIKED THE CAST. I think they did a fantastic job and i think they would have had a huge success if put in the right context.

@Samiup, do you mind explaining why you think it was “bad Stargate” and “bad TV”?

Was it because the characters were always in deep trouble, barely winning by enormous effort and commitment?

Was it because the stress on the characters illuminated their choices and the price they paid to overcome obstacles?

Was it because of the abundance of complex characters with believable flaws, things they could not and did not overcome in 44 minutes?

I didn’t realize so many people didn’t like Stargate Universe, and that there was such hateful fans. I mean, who spits on someone in this day and age? Seriously, wtf?! I enjoyed the series though. It was different, but that isn’t necessarily a bad thing. It had a great cast and characters too.

I can’t believe it’s been 10 years since it ended! I feel like I was just watching it air yesterday.

I agree I enjoyed it as well

MGM made a big mistake when they disided to cancel SGU fans are still talking about it even now. Very few shows have fans talking them after this lenght of time. That should mean something. (hint)! theres a strong fan base. Bring it back. Think Star Ship.

Idk what anyone was talking about. It had to be the best Stargate show ever produced albeit 2 seasons. I watched them repeatedly over the years from start to finish at least 30 to 40 times. I would still love to see them come out of the cryo-chambers.

Wow , i didnt know that some people can be so hostile to the show , man SGU was for my taste not bad and i was quite disappointment when its ended abruptly.