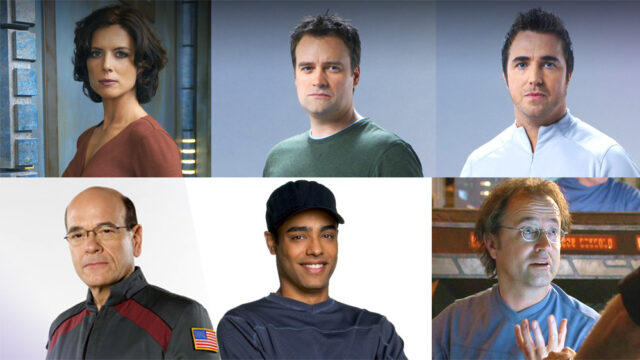 We’re just days away from San Diego Comic-Con, and this year’s event will feature a reunion of the cast of Stargate Atlantis! This year GateWorld is sponsoring a full weekend of Stargate fun over on Discord.

[email protected] in 2021 will take place online from July 23 to 25, with pre-recorded panels, interviews, and other videos taking place all weekend long. The Stargate channel will feature videos from GateWorld.net, some of our favorite interviews from the first season of “Dial the Gate,” and a celebrity play-through of an episode from the Stargate SG-1 Roleplaying Game. Fans can chat Friday through Sunday on the #stargate Discord channel.

But the big feature of the weekend for Stargate at SDCC is a brand new Atlantis cast reunion panel on Saturday night, hosted by Dial the Gate’s David Read! Here is an exclusive sneak-peek at this amazingly fun conversation. The cast reminisces about filming the show (and working on its beautiful standing set), and reflects on its enduring popularity among viewers old and new:

With David on the panel to mark the show’s seventeenth (!) anniversary are:

Tune in via Discord for Dial the Gate’s full-length cast reunion panel on Saturday, July 24 (6pm Pacific time / 9pm Eastern). The panel will have a 45-minute premiere at Comic-Con, and the full and uncut conversation will be available after that on the “Dial the Gate” channel.

Sign up for Discord now and join the #stargate channel on the CCI Central Discord server to chat with us and to see all the videos this weekend. See you there!

Here’s what we will be highlighting on each day of the event (all times Pacific):

Live AMA (10am): Join GateWorld founder Darren Sumner and “Dial the Gate” host David Read for a live AMA chat on Discord to talk about Stargate’s past, its present … and its future.

Videos on everything from Stargate Command’s best (and worst) leaders to the entire range of Goa’uld ships, and more. Dive into Stargate’s lore with short video entries from the Stargate Omnipedia, including Apophis, the naquadah generator, the Tollan, and more.

More featured videos on the Atlantis expedition, including fans’ picks for best episodes, the Stargate networks, Omnipedia debriefs on Todd the Wraith, the Puddle Jumper, and more.

The Stargate Atlantis Cast Reunion (6pm): While you watch, join Jenny Stiven and more as we chat live on the Discord channel!

Day 3 of GateWorld’s celebration of Stargate is all about gaming and Stargate Universe! Tune in on Discord as we revisit SGU with cast interviews and videos, plus a look at the upcoming Stargate tabletop roleplaying game from Wyvern Gaming and the forthcoming video game Stargate: Timekeepers.

Featured videos from GateWorld on SGU include a deep-dive into Season Two’s “Malice,” contributor Adam Barnard’s exploration of “What Defines Stargate?”, plus loads of quick Omnipedia videos on the Eden planet, the blue aliens (the “Nakai”), the Ancient seed ship, and more.

Celebrity Stargate Roleplaying Game! (1:45pm) Wyvern Gaming and “Dial the Gate” present a special rebroadcast of the raucous great time playing the episode “The Butcher of Abydos” with actors Alexis Cruz (“Skaara”), Julie McNiven (“Ginn”), Rainbow Sun Francks (“Aiden Ford”), and Simone Bailly (“Ka’lel”) in an SG-1 adventure together in a mission that takes them to the familiar world of Abydos.