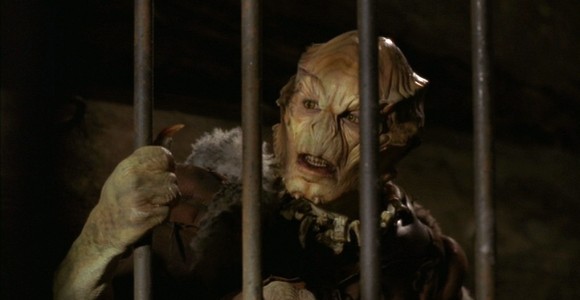 This summer, Planet of the Apes returns to the big screen. I have yet to see this remake, but "Beast of Burden" takes me back to Charleton Heston's classic original. The Earth astronaut in that movie inspired a revolution, encouraging mankind to no longer accept life in slavery, and thus rebel against their ape overlords. Here, in "Beast of Burden," Daniel Jackson takes the role of that astronaut, though it is the "beasts" he inspires, rather than his own humankind.

It is fitting, of course. Dr. Jackson earned the trust of Chaka, the Unas friend he met at the end of a short rope in "The First Ones" last season. Now, because of that trust, Chaka has been abducted into slavery by a group of pre-industrial-age humans. Daniel must do what he can to save his new friend. And though it is not his intent to inspire the Unas slaves to revolt, Daniel Jackson's morality would never let him ignore their plight.

This episode is a wonderful study of morality, a subject few television shows dare to examine. The slavers in "Beast of Burden" justify their actions because the Unas had once enslaved them. At some time in the past, this world had been ruled by a Goa'uld, who in turn was served by the Unas. When the Goa'uld left, either due to a rebellion or for some other reason, the people of this world subjugated the Unas. How that was accomplished is neither explained, nor pertinent to the story at hand.

What is pertinent is the moral issue of this circle. Can it be broken through natural evolution? And will SG-1's intervention help or hinder that process?

Daniel's focus in not on the future. He is looking at what is happening now. The evolution of the circle is not an immediate concern. The Unas need help now. Chaka needs help now. Although Jack cannot deny those needs, he is looking ahead. And what he sees there is not pretty. He does not see far enough to examine the evolution either, but he does see revolution.

Revolution means fighting and dying. What's more, Jack refuses to accept the possibility that humans might be required to die on behalf of enslaved Unas.

Here we address another moral issue, the concept of "beasts." That Unas might be considered beasts was a concept I doubt any would have argued prior to last season's "The First Ones." Previous experiences with that species ("Thor's Hammer," "Demons") have not been pleasant ones. Like Jack, we would see the Unas as evil creatures, pure and simple. But Daniel has seen a different side.

In "The First Ones," Daniel was able to communicate with Chaka, and it was precisely that communication that lead Chaka to see Daniel as a friend, rather than just "meat." Perhaps with another Unas that communication might not have been possible. For example, an Unas that was older and wiser -- definition: more set in his ways -- might have forced Daniel to silence during the long march to the cave. But the communication did occur; and it gave Daniel an entirely new insight into Chaka's species.

Jack, however, has not shared that insight. Unconcerned with Daniel's desire to save Chaka, Jack's willingness to go to the planet is based instead on his interest in finding out how these people have managed to obtain Goa'uld weapons and utilize the Stargate. The Unas, to Jack, are just "beasts." While he does exhibit a sense of sympathy for the beasts upon arriving at the planet, he remains unwilling to risk human lives on behalf of Unas lives.

By the end of the episode, a few Unas have been freed, one of whom has already been recognized by the others as a leader. These Unas are armed, and have demonstrated a willingness, even an eagerness to use deadly force -- as Daniel realizes when he cannot stop Chaka from killing an injured man who no longer even presents a threat. Daniel then hands Chaka a zat gun, telling his Unas friend, "ka keka" -- they don't have to kill. But how well will his short message be remembered after he disappears back through the Stargate?

Chaka is, after all, from a primitive, tribal culture that practices animal (or human) sacrifice and selects its leaders through combat. Can this primitive Unas evolve quickly enough to strive towards co-existence with humans rather than another conquest of them, thus continuing rather than breaking the circle?

"Beast of Burden" comes off very well. The settings, costumes and characters are all immensely believable, with the big-screen qualities we've come to expect and probably even take for granted. Still, it is the question of morality and the interaction of humans and Unas that I cannot help but focus on. One Unas gently leads a child away from the imprisoned troublemakers, while another acts out in a rage and is cruelly tortured. One human nonchalantly tortures an Unas, while ...

Perhaps that's what is missing from this episode. It would have been nice to see one human (other than SG-1, of course) act gently with an Unas. I might be more willing to share Jack's concern for this human populace if I could have one true glimpse that they are worthy of it.

Stargate SG-1's producers must be commended for consistently going where others fear to tread. They bravely take us into the gray, murky waters of morality. In "Beast of Burden," the issue is slavery. In last season's "The Other Side" (and even "Scorched Earth") it was genocide.

In "The Other Side," Jack O'Neill virtually murdered a Nazi-esque leader by ordering the iris closed when he knew the man was coming through the wormhole behind him. You could say that action was justified, that the man deserved his fate. You could be equally right in saying that murder is never justifiable.

It's a debate you cannot win, regardless of which side you take. There are too many people, cultures and religions out there to contest your thoughts. Nor does Stargate SG-1 attempt to show us that one side of this or any other debate is right or wrong. Rather, they show us what a certain character might do, and how the others around that character might react. In "The Other Side," Jack allowed a man to die, knowing he could have prevented it but choosing not to, while Sam Carter stood aside, her wide eyes showing she was appalled -- though she would not voice her complaint, perhaps because she couldn't help but agree with the action in her own way.

What makes "Beast of Burden" so poignant is just that type of character interaction in an un-winnable debate. Both Jack and Daniel clearly recognize the enslavement of Unas as wrong. However, Jack also recognizes the inevitable, devastating result of any attempt on behalf of SG-1 to free even one of those slaves, while Daniel cannot or will not accept that conclusion. Can the Unas be freed without killing any humans? Daniel insists they can; but Jack lost his rose-colored glasses long ago.