Browse: Home / Television / Stargate SG-1 / Season Four / The Other Side 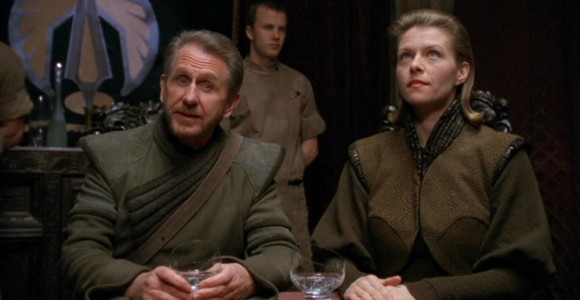 A warring alien race offers to exchange their advanced technology for Earth's help in defeating their enemy.

As Jack O'Neill arrives at Stargate Command after some well-earned rest, he finds Major Carter still hard at work. Someone has dialed Earth's Stargate five times in the past hour and a half. Finally, the S.G.C. is able to establish radio contact. For the first time, a race transplanted from Earth has "called home."

The caller's name is Alar, leader of the inhabitants of the nation-state of Euronda. His people are at war with a rival nation, and are losing. Their underground base is protected by a great energy shield, but more and more bombs penetrate each day. Though they once coexisted peacefully, the enemy of Euronda now occupies most of the continent.

In trying to contact Earth, three Eurondan volunteers went through the Stargate and were killed when they impacted the iris shield protecting Earth's gate.

SG-1 visits Euronda to offer them assistance, and to negotiate a trade for their advanced technologies. Alar shows them the facility, and Carter quickly determines that the Eurondans are at least a hundred years ahead of Earth.

What the Eurondans need is deuterium, found in heavy water, to power their war machine. The people use controlled fusion reactors, but their access to heavy water has been cut off. O'Neill agrees to provide as much heavy water as they need (it is abundant on Earth) to win their war, in exchange for the Eurondan's advanced weapons and medical technology.

Daniel is concerned about the agreement. Jack did not ask anything about their war or their enemy, but simply arranged the exchange (after some first-hand experience with the Eurondan's remote piloting neural interface, used to fly unmanned ships on the surface against enemy bombers). After three unsuccessful years of seeking technology to defend against the Goa'uld, Earth may have finally hit the jackpot – but at what price, asks Daniel.

O'Neill refuses to listen to him, and demands that he and Carter return to Earth. They consult General Hammond, who is pleased with the wonderful trade agreement. The General agrees, however, to let Daniel try and learn more about the enemy – before Earth provides Euronda with the means of defeating them.

On Euronda, Alar shows SG-1 the people he is trying to save. Two great caverns are filled with stasis chambers, where thousands and thousands of Eurondans sleep. They will not be revived until they have reclaimed the surface.

Daniel argues that the surface of Euronda, though, isn't really worth fighting for anymore. The atmosphere has been poisoned. But the Eurondan enemy continues, somehow, to survive. Jackson encourages Alar to revive his people and take them through the Stargate to a new world, where they can begin again. Alar refuses. Euronda is his home, and is what he has been fighting for since he was a child.

O'Neill and Jackson continue to clash over the moral question of supporting this war. O'Neill is set on acquiring the technology, and is unwilling to even ask about the enemy being fought. But when Alar expresses misgivings about Teal'c – asking that he not return again, because he is "not like us" – O'Neill is forced to consider that Alar may be fighting an immoral war.

He quickly apologizes to Daniel, and tells him to find out as much as he can about the war and the enemy being fought. He and Teal'c, meanwhile, return to the stasis chamber to examine the records of those who sleep there. They discover that every Eurondan is young and Caucasian – "genetically pure," as Alar puts it.

Daniel learns that it was the Eurondans who started the war in the first place. Their enemies are called "Breeders," because they reproduce "indiscriminately, with no concern for genetic purity."

Major Carter, meanwhile, discovers pipes leading from underground storage tanks all the way up to the surface; the Eurondans build the underground base before the war started, to prepare for it. Then, they poisoned the skies to exterminate the "genetically impure."

Faced with the reality that Alar and the Eurondans are racists, fighting a war of genetic cleansing, O'Neill turns against them. Under the guise of piloting the unmanned aircraft against enemy bombers, Jack uses the fighter wing to escort the bombers over the base, destroying Eurondan fighters along the way. Finally, he crashes the planes into the ground over the base, causing it to begin collapsing.

There is no more deal, no heavy water coming, and no new technologies for Earth. With Euronda's world crashing in on them, SG-1 leaves through the Stargate. Alar pleads with O'Neill to take him with them – he will give them all his knowledge in exchange – but O'Neill warns him not to follow.

After they step through into the S.G.C., Jack pauses in front of the Stargate. "Close the iris," he says calmly. The barrier collapses in front of the wormhole, and moments later the dialing computer detects a splash against the iris. Alar, presumably, did not heed Jack's warning. Carter stares at O'Neill, not sure what to make of his actions.