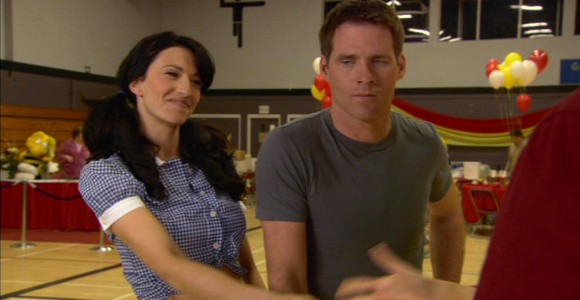 When the Lucian Alliance puts a bounty on SG-1's heads, Cameron Mitchell finds himself a target while attending his high school reunion.

It's high school reunion time for SG-1's Cameron Mitchell, Class of '87, who takes Vala along to Kansas as his date. There he reconnects with old friends like Darrell Grimes, and his high school crush Amy Vanderburg, "the one that got away" (first mentioned in "Ripple Effect"). Amy is a beautiful, wholesome girl in her late thirties, recently divorced (and available). Darrell finds Vala very intriguing, and as Cam and Amy confess their high school crushes on each other the Colonel gets a phone call from Stargate Command: Colonel Carter and Teal'c have been attacked, and someone may be coming after him.

On a Jaffa planet, an injured Teal'c is attended to by the Jaffa Cha'ra. They aren't sure if Teal'c's attackers have left or not, so Teal'c encourages Cha'ra to put out the word that Teal'c survived the attack – and wait to see if someone comes to finish the job.

Daniel, meanwhile, is working diligently at the Museum of Antiquities.

The man now after Mitchell on Earth is a humanoid but alien bounty hunter, a brash and no-nonsense warrior who has already tracked Mitchell to the party and is posing as a fellow classmate. He is Odai Ventrell, who catches Cam and tells him he's here to collect the price on the Colonel's head.

But Cam is only a pawn in a larger game, the bait for a bigger prize that the bounty hunter hopes to collect: He wants all of SG-1. And now they're on their way ...