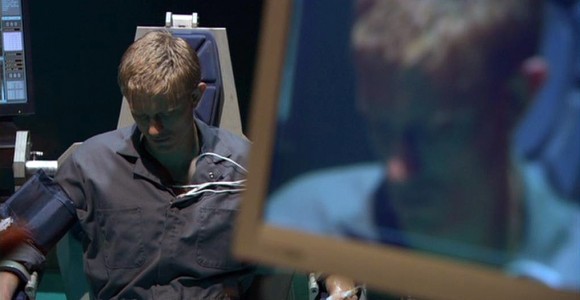 SG-1 finds a genetically advanced Goa'uld-human hybrid created by Anubis, and returns him to Earth for study. But even keeping him alive may not be worth the risk.

The Tok'ra have delivered Earth evidence that the Ori may be constructing another Supergate in the vicinity of P3X-584. With General Landry's permission, Colonel Carter and SG-5 investigate. But almost immediately the team returns. Carter, dismayed, reports that they were sent to another planet, twelve thousand light years away from 584.

Sam and Sergeant Harriman find multiple "bumps" in the Stargate logs, and it is soon determined that these anomalies were the receiving gate sending out a request for an authorization code. Unlike the initial M.A.L.P., organic matter that has not delivered the correct combination before arrival is "call-forwarded" to a random Stargate address.

Carter devises a program to crack the combination, and during the next try a bacterial culture has been placed in the M.A.L.P.'s cargo compartment. The cipher works and the probe arrives on 584. SG-1 and SG-5 follow.

Major Altman initiates the gravity sensors to detect any anomalies in the vicinity of the planet. Meanwhile, Colonel Mitchell, Teal'c and Dr. Jackson investigate a hidden laboratory beneath the surface. Appearing decidedly Ancient in technology, they find a genetic manipulation device and a young man sustained in an Ancient stasis unit. Witnessing Daniel tamper with the gene manipulator, Mitchell presses a button on the chamber, which thaws and releases the man. Almost immediately he begins to convulse.

The team returns him to Earth. Fortunately the gravity anomaly was simply an uncharted black hole and not a new Ori threat. Dr. Lam compares the man's physiology to that of the Ancients mentioned in their database, and determines that he is far along the evolutionary path. The man becomes conscious, and is informed that he is on Earth. Saying his name is Khalek, is claims that he was kidnapped by a "man" who manipulated his D.N.A. All he would like is to return home. Carter suspects that Nirrti was not the only Goa'uld who was interested in exploring the possibility of an advanced host, but Mitchell cannot help but comment that the lab looked far more Ancient than Goa'uld.

Meanwhile, Daniel and Teal'c return to Earth with a startling discovery. The lab belonged to Anubis, who created a Goa'uld-human hybrid ("Resurrection") and infused him with his own D.N.A. from material of a time before he was ascended. He then used the manipulation device to enhance him. For all intents and purposes Khalek is the son of Anubis.

The staff is assembled to determine what will ultimately be done with Khalek. After repeated options to return him to one of the known stasis chambers, Daniel dares to reveal the potential risk of leaving him alive at all. For now, Landry opts to take every available precaution.

Khalek awakes, restrained in an isolation ward. Daniel sits on the other side of a wall of bullet-proof glass. At first he acts bewildered and afraid, but when Jackson informs him that they know about Anubis's genetic tampering, Khalek drops the performance. He admits that he has the memories of his "father," including a confrontation with Daniel. He attempts to bait the archaeologist, and promises him that before their encounter is over one of them will experience the taste of a kill.

Agent Woolsey arrives on behalf of the international committee to suggest that Khalek be left intact for study, lest repercussions fall upon the entire Stargate Command. Back on P3X-584, Major Altman has made a discovery: an Ancient brain scanner that can monitor Khalek's mental advancement. It is sent back to the S.G.C. Daniel theorizes that it must reach 80 to 90 percent in order for Khalek to shed his physical body and willfully ascend. Once wired in and activated the scanner reveals that the hok'taur is at 68 percent, and he is evolving right before their eyes.

Khalek's heart rate accelerates. He regains consciousness and blows out a monitor, taking Major Altman to the ground. Mitchell tries to discharge a zat'ni'katel but Khalek uses his powers to break his bounds and snatch it, missing Cameron but neutralizing Carter and Dr. Lam. Mitchell fires two bullets in his chest. Soon, though, he wishes he emptied the clip, because Khalek is regenerating at an astonishing rate ... and the assault has hiked the ascend-o-meter by 5 percent.

Khalek has been placed back in his chair. There are now 50 thousand volts running underneath him with a one-way Tok'ra forcefield barring the door. Dr. Lam believes that his abilities can be controlled with a dopamine inhibitor. A shunt has been inserted into the base of his skull and a massive dose will be injected if he gets creative again. But while Woolsey is distracted with Landry, Khalek melts the dopamine injection tube.

Landry informs Woolsey that Khalek will be transferred back to his stasis pod immediately, regardless of the international committee's opinion or pocketbook. Just as Mitchell and two airmen begin to move the prisoner the rest of SG-1 returns to Earth with more bad news. Khalek has reached a plateau in his mental development and he requires more treatments in the gene manipulator to get past the 80 percent wall. He wants to return to 584.

Khalek, now placed securely in his chair, uses his advanced hearing to learn that they are aware of his plans. He pulls the airmen through the Tok'ra shield, where they are electrocuted on the platform. He cuts primary power to the base and makes his way from Level 21 down to 28. Inside the Gate room he uses his powers to dial 584. "You should have killed me when you had the chance," he says, and departs.

But soon the Stargate is activated again. The iris not closed, he emerges. Mitchell fires his gun at him, but Khalek focuses his energy in Cameron's direction and blocks the bullets. His concentration focused, he did not anticipate Daniel entering through the other door; his bullet successfully penetrated. Mitchell and Jackson dump their clips in Khalek, who falls off the back of the ramp.

Carter did not have time to inform Landry that she had successfully installed the call-forwarding device in the Earth Stargate. In retrospect, she was glad she didn't.

The data recorded may prove useful to constructing a defense against the Priors. Woolsey ensures Daniel that he will make certain the families of the officers who died will be well taken care of. Both men admit that they wish they were wrong about Khalek and his danger.