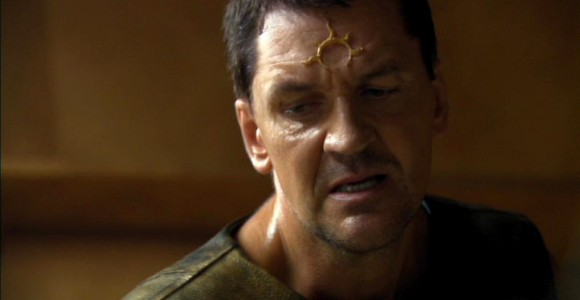 When a terrorist attack decimates a Jaffa summit Teal'c strikes out on a quest for revenge, believing that the perpetrator is one of his own people.

Representatives of the Jaffa, including Teal'c and Bra'tac, meet in a rare summit on Dar Eshkalon to determine the future of their people in the face of the Ori threat. But their enemies are many, and a terrorist attack on the summit leaves many dead, including women and children.

Bra'tac is seriously injured and taken to Stargate Command, where Dr. Carolyn Lam cares for him. Teal'c ignores his team's entreaties and departs on a one-man quest for revenge, having reason to believe that the man responsible for the cowardly bombing is another of Bra'tac's former pupils, a ferocious and extremely capable warrior named Arkad. He is a charismatic leader opposed the summit, and wishes to lead the Jaffa people himself – and he is a follower of Origin.

Teal'c's search leads him to an alien bar, where the sympathetic owner points him to a customer named Lizan. A human, Lizan's people was once enslaved at the hands of the Jaffa and doesn't mind seeing them now killing one another. But Teal'c will do whatever it takes to find a lead on Arkad.

But the stakes get even higher: SG-1 learns that Arkad may be stockpiling weapons-grade naquadah for an attack on Earth.

The enraged Teal'c's is taking no prisoners, and his hunt leads him to Ba'Kal, a Jaffa terrorist working for Arkad. Ba'Kal does not fear death, because he believes the Ori will ascend him. But Teal'c is not here to argue religion or to watch Ba'Kal endure torture: he wants answers, and he has removed Ba'Kal's symbiote and replaced it with a bomb.

But, of course, all is never as it seems. As Teal'c leaves behind a trail of bodies in his search for Arkad, Stargate Command receives an incoming wormhole and a message from Arkad himself. He claims that he is not responsible for the bombing, and offers his sincere help in stopping the impending attack on Earth ...