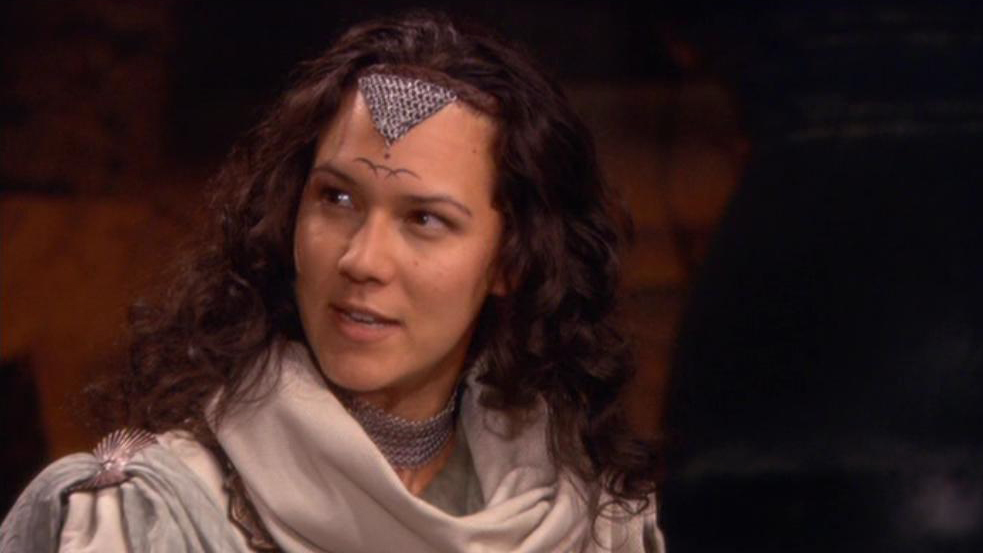 Female Jaffa warrior who was originally forced to serve the Goa'uld Moloc for many years. Ka'lel spent a considerable time in the Hak'tyl resistance movement under the leadership of Ishta. When the battle for Dakara was a victory she took a seat on the new Jaffa High Council.

Ka'lel was aware of Gerak's troop movements on Earth in the hopes of recovering Baal. Between council sessions she told this to Teal'c and Cameron Mitchell, who eventually used the information to commence a search on Earth. Unfortunately, it was later that she informed Teal'c she was aware of Gerak's mothership and battalions of Jaffa soldiers on Earth, hoping to not harm the integrity of the High Council.

Ka'lel was later captured and brainwashed by Baal, in an attempt to usurp the Jaffa High Council. Her final fate after the Ori destruction of Dakara remains unknown.

Birthright - Ka'lel is among the Hak'tyl warriors who cautiously welcome SG-1's arrival to their place of refuge.
Sacrifices - Ka'lel comes to Earth with the rest of the Hak'tyl while their people are relocated to a new planet.
Ex Deus Machina - Ka'lel uses her position on the High Council to relay key information regarding Baal's latest whereabouts to Teal'c and Mitchell.
The Fourth Horseman - Ka'lel sits in on the Jaffa High Council meeting, astonished that their leader, Gerak, has been transformed into a Prior.
Stronghold - Ka'lel is captured and brainwashed by Baal, who hopes to use the Jaffa High Council as a firewall between himself and the Ori threat.