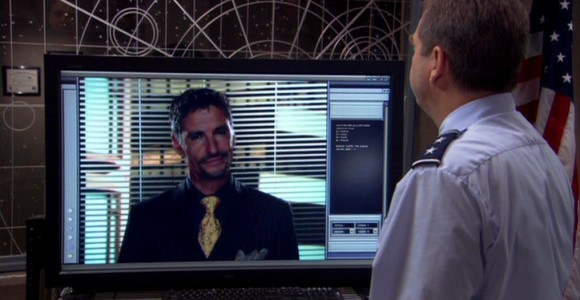 SG-1 must investigate when evidence suggests that there are still Goa'uld hiding on Earth – including a former System Lord. Tensions between Earth and the Free Jaffa continue to mount.

A Jaffa marked under the service of Lord Yu has been discovered dead (the victim of a hit and run) on a remote road in Virginia. Teal'c is aware that many of Yu's Jaffa are now under Gerak's banner. He and Colonel Mitchell leave for Dakara to investigate.

Teal'c addresses the Jaffa High Council, and afterward shows a picture of the Jaffa to Gerak, who claims he never knew him. But both Teal'c and Mitchell are convinced he is lying through his teeth.

Daniel meets with Alex Jameson's wife, Sheila, who tells him she noticed an unusual change in her husband's behavior six months before. Fearing an affair, she had a private investigator follow him, but only two days into his duties he gave her her money back and strongly suggested she drop the matter entirely. Scared, he requested the few photos he took back. She refused. Daniel requests to borrow them and she consents.

Gerak visits a prison chamber on Dakara where Yat'Yir has been exercising his handiwork. A battered and beaten Alex Jameson has withstood physical torture. As Gerak promises him that the Jaffa will soon possess the information he seeks, Jameson's eyes glow.

Colonel Carter visits Farrow-Marshall headquarters and speaks with Charlotte Mayfield, vice president of the company. When Carter tells her evidence of trucks moving in and out of their closed Virginia plant and a press to uncover the missing Jameson and his whereabouts, she is eventually shown the door. Down the hall, Mayfield returns to a surveillance center, where Baal has been watching the cameras.

Teal'c consults other Council members but none are willing to divulge information, save one – Ka'lel – who tells both he and Mitchell that Baal took refuge on Earth following the battle for Dakara – and Gerak is busily attempting to reacquire him.

The Goa'uld in Jameson reveals Baal's new location and a cargo ship loaded with Jaffa troops lands atop the Farrow-Marshall complex in the middle of the night. Defended by a task force of personnel, Baal narrowly evades capture.

Stargate Command receives a message from Baal himself, declaring his intentions to live out his existence peacefully on Earth, obeying Earth laws. In exchange, he wishes to be left alone. To insure that this happens, he says that he has placed a naquadah bomb somewhere in the United States.

Jackson and Carter team up with Agent Barrett to move in and capture Baal, who has been reported spotted in a hotel. Meanwhile, Mitchell and Teal'c board the Prometheus to search for a Jaffa presence in Earth's star system. On the surface, Barrett orders the mission aborted, despite the fact that Daniel and an agent have someone who looks like Baal in their sights, but across town the former System Lord is giving a televised speech in regards to his recent acquisition of another firm.

Prometheus finds a mothership hidden behind Earth's moon, commanded by Yat'Yir, who does not wish to engage in battle but refuses to withdraw. But Teal'c intends to shame Gerak into removing his forces from Earth in front of the Council. In shock, he learns the Council has been aware of the operation. He presses that, after all the Tau'ri have done for the new Jaffa nation, they at least owe Earth the respect of remaining up front with the truth.

General Hank Landry decides to continue with their own operation despite the Jaffa's own attempts. The modified Tok'ra symbiote poison is loaded into a missile and poised to attack a compound where Baal has been spotted. Baal receives intelligence that this threat is coming and promises that a naquadah bomb will now detonate the Halcyon Tower in downtown Seattle.

As the symbiote poison missile hits it's target Gerak's forces attempt to capture Baal. Prometheus beams Carter to the tower where she soon deduces that the building's infrastructure is laced with naquadah. Before it detonates, Prometheus beams the entire building into space, where it explodes. Fortunately, a five-block radius was evacuated, so no one saw the beam-out.

Teal'c returns to Dakara and learns of Baal's capture. Before his very eyes the former System Lord is executed. He reports this to Stargate Command who reveals evidence that Baal has been cloning himself. It's possible the Baal that was killed on Dakara was not the real Baal at all. When Mitchell suggests that he report this to the Council, Teal'c declines. Gerak has fought hard for a victory, and to tell them now would not be the right thing to do.

Baal sits and watches Julia Donovan's news report about the unusual gas explosion at the Halcyon Tower. Nearby, another Baal enjoys a box of Chinese take-out. Baal's secretary sits patiently as yet another Baal pours her a drink, and a drink for indeed another Baal who is reading a newspaper. Baal himself, marked by his symbol on his shirt, tells the three clones that he will head to bed early. Tomorrow is a big day.