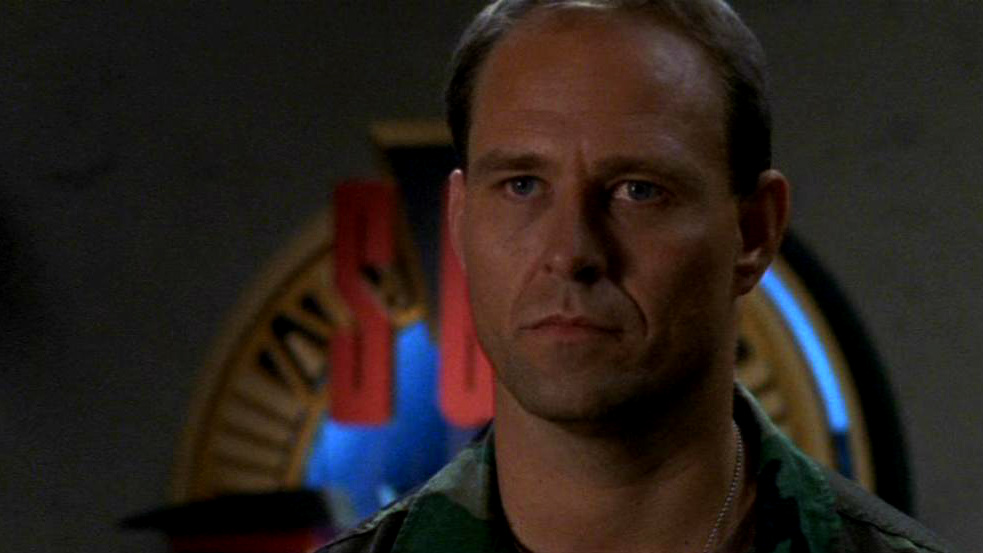 The long-time commander of Stargate Command's SG-3 Marine unit, Colonel Makepeace would not be considered the friendliest member of the S.G.C.. But when it came to getting a job done, the tough and to-the-point Marine completed his missions with a high success rate. For three years he served as the third-highest ranking officer on the base, beneath Colonel Jack O'Neill and General George Hammond.

With help from the Asgard, Makepeace was discovered to be a spy for the rogue N.I.D. group under the command of Colonel Harold Maybourne, who was covertly reverse-engineering stolen alien technologies. Smaller items stolen by the rogue group would be left on a designated world for Makepeace to covertly pick up and pack back to Earth in his gear during routine missions.

O'Neill had Makepeace arrested and charged with high treason against the United States and its allies. He is presumably serving a prison sentence.

The Broca Divide - Makepeace leads SG-3 to the Land of Light in a joint mission with SG-1.
The Tok'ra, Part 1 - Makepeace and his team visit the Tok'ra to bring back Captain Carter, as her father is near death on Earth.
The Tok'ra, Part 2 - When the Tok'ra refuse to allow Carter or anyone else to return to Earth, Makepeace finds himself stuck on the Tok'ra homeworld -- which is being attacked by the Goa'uld.
Into the Fire - Makepeace returns from a mission with a message from the Tok'ra: O'Neill, Jackson and Carter are prisoners of Hathor. Hammond sends him and his team to rescue them, but Makepeace is trapped with his men when the S.G.C. is unable to send reinforcements.
Shades of Grey - When O'Neill is forced to resign, Makepeace briefly becomes SG-1's commanding officer -- only to be revealed as a rogue N.I.D. mole. He is arrested.