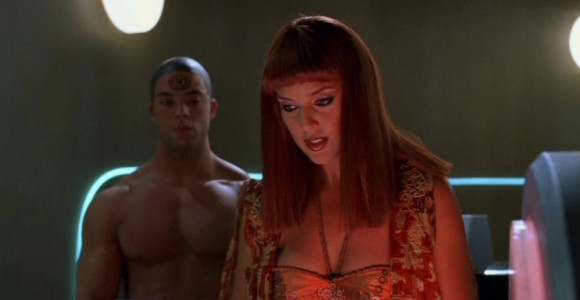 O'Neill, Carter and Jackson must escape Hathor's clutches, while Teal'c tries to raise a Jaffa army on Chulak. General Hammond must take desperate measures to rescue the team.

Captured by the Goa'uld queen Hathor, Jack O'Neill, Samantha Carter, and Daniel Jackson are imprisoned on her planet in a mock-up of the S.G.C. She had brought them there and tried to convince them that they had been in cryogenic stasis for more than 70 years, but the group foiled her plan and nearly escaped.

Now, Hathor has taken a newly matured Goa'uld from the belly of one of her Jaffa soldiers, and is looking to SG-1 for a new host. She selects the ever-sarcastic Jack O'Neill, but when Jack tries to grab the parasite he is hit with a blast from a zat gun, fired by Raully, one of Hathor's Goa'uld servants. Hathor is furious, but Jack is saved for the moment.

Meanwhile, Colonel Makepeace, leader of SG-3, arrives on Earth and tells General Hammond that they made contact with the Tok'ra (Goa'uld resistance fighters), and found out the location of SG-1. Now missing for more than three weeks, SG-1 has been taken captive by Hathor. But the Tok'ra have an operative on the inside, who risked much to get this information back to Earth. A rescue mission is mounted, consisting of SG-3 and every other available team (SG units 5, 6 and 11).

On his home world of Chulak, Teal'c has returned to raise an army of his own to fight the Goa'uld, and to try and find SG-1. He finds Bra'tac, his friend and former mentor, beaten almost to death in his own home. Bra'tac has been attacked by the last of Apophis's personal guard for his betrayal ("The Serpent's Lair"). The Jaffa fear that because of Apophis's fall, his son Klorel will return to Chulak to claim his inheritance.

On Hathor's planet, O'Neill is laid flat on a table, as the parasite slithers over his body and enters his neck. The leader of SG-1 has become infected with a Goa'uld. Hathor leaves to allow the joining to fully take place, knowing that O'Neill will certainly lose the battle against the symbiote. In her absence, the Tok'ra operative makes herself known: it is Raully, the female Goa'uld scientist who had earlier shot O'Neill with a zat gun to prevent the Goa'uld from entering him.

Now, she will save his life. She tells O'Neill that she is going to put him back into cryo-freeze to kill the symbiote. The Goa'uld will die, she promises, but in the mean time he must fight it.

Makepeace's forces journey through the Stargate to Hathor's planet, and invade the complex. They free Jackson and Carter from the Jaffa guards, and learn of O'Neill's fate. "He's a casualty," Makepeace says, demanding that they leave immediately. The group agrees to leave, but outside find that the Stargate is being heavily guarded by Hathor's people – including staff cannon towers and an impenetrable energy barrier.

As the S.G.C. personnel take cover in underground Tok'ra tunnels, Carter returns to the complex to try and find the shield's generator. The Jaffa enter the tunnels, and soon capture all of the humans.

On Chulak, Teal'c has called for a meeting of the local warriors. He declares that they have been living under the oppression of false gods for too long, and must now rise up against them. A few men remain, but most leave, believing Teal'c to be a traitor and a heretic. One of the remaining men pulls back his hood – it is General Hammond. After promising to send reinforcements through the Stargate, Hammond failed in getting authorization from the president. Now, he needs Teal'c's help to rescue the four SG teams.

O'Neill has been brought out of the cryo chamber, but Hathor has discovered the Tok'ra operative and blasted her with a Goa'uld hand device. As she brings the weapon down on Captain Carter, O'Neill grabs Hathor from behind and throws her into the freezing chamber. With a tip from the fallen Tok'ra, O'Neill and Carter destroy the power generator and flee to the Stargate.

With only minutes to go until Hammond's reinforcements arrive, O'Neill must distract Trofsky and his Jaffa soldiers. O'Neill walks toward them, knowing that Trofsky believes O'Neill to now be a Goa'uld. Jack can't keep the act up long, but it's long enough for the Stargate to begin dialing. A traveler is incoming. It is Teal'c and Hammond, flying a large fighter borrowed from Bra'tac.

The ship eliminates the gun towers, and the Goa'uld forces are overcome by the SG teams. Bra'tac arrives behind his ship, and exercises the remaining authority he has with the Jaffa guards, commanding them to stand down.