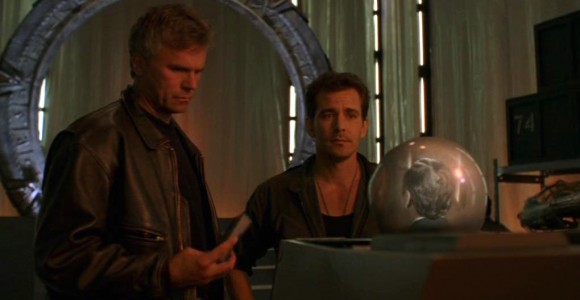 O'Neill steals technology from the Tollan, and is forced to leave the Stargate program. Maybourne offers an intriguing proposal involving his black-ops team.

SG-1 arrives on the planet Tollana to negotiate – they hope they can secure new weapons technology from the advanced alien race, because the team recently saved their world from a Goa'uld attack ("Pretense"). The Tollan refuse, because they have shared technology in the past and had it used for evil ("Enigma"). Now, it is strictly forbidden for them to share technology with less advanced peoples.

Colonel O'Neill grows frustrated with the arrogant, self-righteous Tollan, and storms out. Carter, Teal'c and Jackson follow, and watch as O'Neill opens up a wall panel and removes a Tollan device (one that disables weapons – human and Goa'uld alike). He takes the device back to Earth, and is congratulated by Hammond. SG-1 is in shock, and does not know how to tell the General that O'Neill has committed a crime that may earn him a court martial.

Hammond soon learns the truth, and is quickly met with insubordination by O'Neill. The Colonel is examined by Dr. Fraiser, who finds nothing medically wrong with him. And when the Tollan arrive to demand the return of their property – and threaten to break all ties with Earth – Jack is given an ultimatum. Either he can face a court martial and prison time, or he can retire.

Jack chooses retirement, and settles in to a monotonous life at home in Colorado Springs. Jackson comes to visit him, and learns that Jack is no longer the man he knew – or thought he knew. Their friendship is torn asunder, and Daniel leaves.

A week later, Colonel Maybourne shows up to speak with Jack. He offers him a new opportunity: commanding a rogue, off-world Stargate team, one that acquires technology by any means necessary to help defend Earth. This team was formerly based on Earth, using the second Earth Stargate to steal advanced technology from other worlds ("Touchstone").

Jack refuses at first, but Maybourne is confident that he will miss the adventure that the Stargate offers. O'Neill eventually agrees, and embarks on a plan to join the secret, black-ops unit at their off-world base.

Now convinced to abandon diplomacy and join Maybourne's way of doing things, Colonel O'Neill returns to the S.G.C. and requests to live out the rest of his life off-world. He convinces General Hammond to send him to Edora, a planet where he recently spent three months and fell in love with a woman ("A Hundred Days").

Immediately after arriving on Edora, Jack dials the gate to the coordinates of the secret operation, and meets the rag-tag band of soldiers. There are about eight in all, and their temporary leader is a young patriot named Neumann – one of the four men from whom SG-1 recovered Earth's second Stargate a year ago ("Touchstone").

O'Neill is quickly integrated into the unit – men and women who greatly admire O'Neill and SG-1, though they do not yet completely trust his change of heart. They take Jack on his first mission: the group retrieves an Asgard device that renders an individual completely invisible.

Now, they must get it back to Colonel Maybourne on Earth. When the team acquires larger items, they must reverse-engineer them and send plans back; but smaller items like this can be smuggled back to Earth through their sympathetic contact in the S.G.C. Maybourne alerts them as to when and where the mole is going to be, and they arrive on that planet before the SG team to leave the device.

Jack volunteers to take the Asgard device to the planet, and Neumann allows him – though he is uncertain. O'Neill arrives alone on the rendezvous planet and hides the item next to the dial-home device, but must retreat into the bushes when the SG team comes through the gate.

It is SG-1, now under the command of Colonel Makepeace. O'Neill lays low during their brief survey of the planet, but watches carefully when the team leaves. Makepeace stoops down to tie his shoe, and removes the stolen Asgard device, slipping it into his coat. He is the mole, Maybourne's contact inside Stargate Command who has been compromising their efforts for months – perhaps even years.

Soon after O'Neill's return to the base, an Asgard mothership arrives in orbit of the rogue camp's planet. They begin transporting their stolen technology away. O'Neill tells the group what is happening, and after punching out Neumann, dials the Stargate to Earth. The rogues have two choices: follow O'Neill, or be taken by the Asgard.

The group reluctantly follows him through the Stargate, and find themselves in the S.G.C., where they (along with Makepeace) are arrested for high crimes against the United States and its allies. Hammond and O'Neill reveal that the Asgard and Tollan had both come to the S.G.C. in the past two weeks, claiming that Earth has been stealing their technology. Along with the Nox, they threatened to cut all ties with Earth unless O'Neill and the S.G.C. could apprehend the thieves.

Restored to his command of SG-1, Jack is faced with the task of apologizing to Teal'c, Carter and Jackson, and mending the relationships he was forced to abuse.