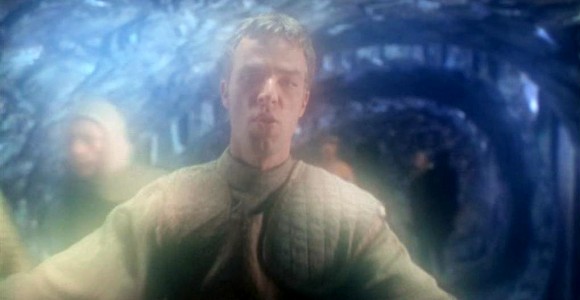 SG-1 locates the Tok'ra, a Goa'uld resistance movement who oppose the System Lords, and attempt to form an alliance. Jacob Carter's cancer brings him near death.

A group of people rush frantically down a strange-looking corridor. One man urges another person forward: "Come, Jolinar, we must hurry!" Jolinar activates the Stargate, and looks up into a mirror. It is Captain Carter.

Carter awakens from her vision suddenly. "I think I've found something," she says. Carter has been experimenting with techniques to help her remember things left in her mind by Jolinar of Malkshur, a Goa'uld symbiote who recently possessed her body for a short time ("In the Line of Duty"). Jolinar was a Tok'ra, a member of a faction of rebel Goa'uld who oppose the System Lords ... and Carter may have found a way to find them.

SG-1 journeys to the gate address that Carter saw in her vision, hoping that the Tok'ra – who were apparently fleeing to a new location – might still be there all these months later. Indeed, SG-1 does find the Tok'ra – or rather, the Tok'ra find them. Carter recognizes one man from her vision – Martouf – and the team agrees to surrender their weapons and be taken to the Tok'ra base to speak with their leaders.

The team is taken to meet Grand Council Garshaw, the leader of the Tok'ra movement and the most hunted Goa'uld of all time. Carter speaks to the group of Jolinar's final days, and his affect on her personally. Garshaw informs SG-1 of the Tok'ra's way of life: they object to being called Goa'uld, as they oppose everything the Goa'uld stand for. The Tok'ra do not take hosts against their will, but only accept those who wish to be joined. The Tok'ra therefore live as truly symbiotic beings – the Goa'uld and the human host live together for mutual advantage, and the human host often speaks freely.

But, this foundational principle of the Tok'ra has also thwarted their efforts to overthrow the Goa'uld System Lords; because they do not take hosts by force, their numbers are scarce, and dwindling. Garshaw introduces SG-1 to Selmak, a symbiote who is about to be lost because his human host – an old woman – is about to die. The Tok'ra ask if one of SG-1 would be willing to become Selmak's new host.

They are all repulsed by the idea, and refuse. This leads the Tok'ra to believe that they are not interested in an alliance – for there is nothing else that Earth could offer them but hosts.

SG-3 soon arrives, sent by General Hammond to extract Captain Carter. Her father, Jacob Carter, is on his death bed. His cancer ("Secrets") has spread to his liver, and is now immediately threatening his life. Carter left for this mission knowing that his cancer was progressing rapidly, but knowing also that the old General would not want his daughter around to watch him lose this battle.

The point is moot, as the Tok'ra refuse to allow anyone to leave the planet. Earth's proposal of an alliance has been reviewed by the Tok'ra High Council and refused, and now the presence of the humans presents too great of a security risk for the Tok'ra. They will be held as "guests" until the time comes for the Tok'ra to move to another world.