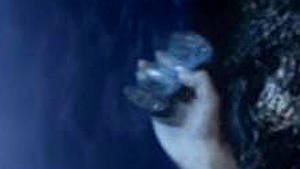 A portable Goa'uld device that allows its user to automatically dial a Stargate that is not currently connected to a dial-home device. The technology locks onto the stationary outer ring of the gate, providing the user with a simple keypad interface for dialing an address. A series of flashing lights indicate that the device is operation. After use it can be easily removed and taken through the Stargate.

The device appears to accesses the Stargate's internal control mechanisms wirelessly. It also seems to provide a minimal amount of power needed to establish a wormhole, as it works on a gate that is not connected to a native power source. (After a connection is established, gates can draw power from the destination.)

It is also likely that the device is commonly carried by Jaffa, at least when traveling to worlds (such as Earth) where it is known that they will not have easy access to redial the Stargate in order to leave.

Children of the Gods (Final Cut) - After gating into the Cheyenne Mountain facility on Earth, Apophis uses a portable dialer to reactivate the Stargate and escape.
Stargate: Continuum - Baal's forces use a dialer to depart from Earth through the Stargate after depositing a bomb on board the Achilles.