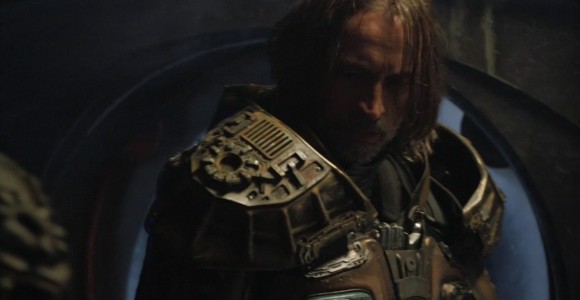 When Young and Rush are trapped on an abandoned alien ship, Rush has Amanda Perry brought on board in an attempt to steer Destiny to them while keeping his secret.

Still struggling after Destiny's testing ("Trial and Error"), Colonel Everett Young is summoned to morning briefing with Camille Wray, Lt. Matthew Scott, and Lt. Tamara Johansen. They discuss the fact that Ginn, their Lucian Alliance scientist, is a member of the same clan behind the potential attack on Earth. Homeworld Command wants to talk with her.

Later, Wray stops by Ginn's cabin. Ginn quickly agrees to use the communication stones to trade bodies with someone on Earth and answer questions. But the young women appears – clearly hiding something. Spotting Eli Wallace's "You Are Here" t-shirt on the bed, Wray understands that she's interrupted something.

Destiny drops from F.T.L. flight. The Stargate doesn't dial, but the countdown clock starts. Lisa Park notices a stationary vessel nearby. From the Observation Deck MSgt. Ronald Greer, T.J., Scott, and Dale Volker can see battle damage. On the still-secret Bridge, Dr. Nicholas Rush brings Destiny to a stop. In the Control Interface Room, Adam Brody dispatches a kino to investigate the other ship.

Rush suggests a boarding party, and volunteers himself for it. Park proposes using the space suits since they no longer have a shuttle ("Aftermath"). Colonel Young, intent on keeping a close eye on Rush, accompanies him. With six hours of air in the suits, they send a kino with a tow line attached into a gaping hole in the derelict.

The alien ship appears to be abandoned, its bridge destroyed. On board, Young assembles his weapon while Rush seals the first bulkhead. There is gravity, so they proceed to explore the corridors until they discover alien pods like those found on the Ancient seed ship ("Awakening"). The ship likely belongs to the same race, though no one seems to be on board now. Since the kino has spotted no life while in automated search mode, the two advance to a small engineering station. Rush activates life support and lighting, and the two remove their helmets. As Rush opens a comm-link to Destiny, the derelict's engines suddenly ignite, driving them away from Destiny.

Drained, the engines just as suddenly shut off, leaving only reserve power – and the ship now drifting away from Destiny. No one knows how to rescue them, and Rush is not about to reveal that he has found Destiny's Bridge and has been using it in secret for many weeks. Instead, he tells Young and the scientists back on Destiny that he has been working on a program to override the auto-pilot. Only Dr. Amanda Perry ("Sabotage") has enough familiarity with Ancient drive systems to help them. Young orders her brought aboard.

Meanwhile, Simeon visits Ginn. Though there are guards and the door is left open, Ginn is fearful. He warns her about getting close to the people on Destiny. Needing Ginn to swap with Perry, Wray interrupts. Simeon is seething with hostility, and wants to know where Ginn is going.

While Brody and Volker work with Rush's algorithms, Dr. Park has gone to Engineering. Wanting privacy, Rush sends Young to explore undamaged areas of the ship. Ginn trades bodies with Amanda Perry on Earth and when Perry is ready, Rush gives her several special algorithms to work with. Perry quickly deciphers the secret messages. Excusing herself, she heads for the Bridge. She encounters Simeon, who thinks she's Ginn. He threatens her again, and this time Greer intervenes.

Perry calls Rush on a discreet channel from the Bridge. At his urging, she ignores Eli's repeated pages. Rush tells her he has cracked the code and accessed Destiny's systems, and gives her verbal instructions on how to pilot the ship to pick them up. When Destiny suddenly turns toward the alien ship and Dr. Perry is nowhere to be found, Eli uses a backup recording to see the algorithms Perry was working on. In short order he, Brody, and Volker arrive on the Bridge.

Realizing Rush has broken Destiny's master code, an angry Eli berates Rush by radio. Hoping to prevent Young from overhearing, Rush cuts the comm-link. But Young has heard. He asks when Rush succeeded. Further angered to learn it was shortly after the Lucian Alliance attacked many weeks ago ("Intervention"), Young hits Rush several times. Though Rush escapes at one point (and the kino is damaged), Young soon has the scientist in a choke hold. Only when Rush goes limp does Young release him.

Rush tries to explain about the overwhelming amount of information that was available to him once he broke the code. He didn't trust Young enough to share what he has learned about Destiny and its true mission – the reason the Ancients launched the ship so many eons ago. Young blames him for the shuttle accident and Riley's death ("Aftermath"); but Rush counters that Young's poor command decisions have also resulted in the deaths of innocents, including the casualties of the Alliance invasion – and Lt. Johansen's baby. There is plenty of blame to go around. And yet, how can anyone trust Young to command when Young doesn't trust himself?

While Perry maneuvers Destiny, Rush reveals the ship's mission: The Ancients discovered complexity and coherence, neither naturally occurring, in the cosmic background radiation left over from the Big Bang at the beginning of the universe. It is a sign of profound intelligence where there ought only to be chaos. They built Destiny to find out who created this message.

Spotting Destiny through a port, they focus on their current dilemma. Destiny approaches off-angle and too fast. Rush asks Amanda to come around for another pass, and the two men suit up. Perry gets backseat piloting advice from Eli, Brody, and Volker. Lt. Scott and Wray join in as they arrive on the Bridge.

Perry grazes the alien ship, sending it into an uncontrolled spin. With no kino to tow a line, Rush and Young will have to jump onto Destiny. As Perry matches speed with the derelict, Eli makes the difficult calculations with calm and confidence. At his order Rush leaps into space. He drifts effortlessly toward Destiny, and his magnetic boots lock onto the hull. But Young's jump is not as well timed. He bounces off the hull – but Rush catches him, holding on tight to the man who only moments before thought of killing him.

Now in control of Destiny, Brody and Volker explore the Bridge's systems and locate planets that could resupply them. Even though Eli searches for data on the radiation message, Young orders a stop. He sends Eli to get Rush.

Rush and Amanda are in Ginn's quarters. Unable to act on their mutual attraction the last time they were together, now he kisses her. Eli arrives at this inopportune moment. As Rush leaves, Eli reminds Perry that she is occupying someone else's body.

Simeon watches as Rush and Eli leave. His guard visibly absent, he slips into Ginn's quarters to finish what he started.