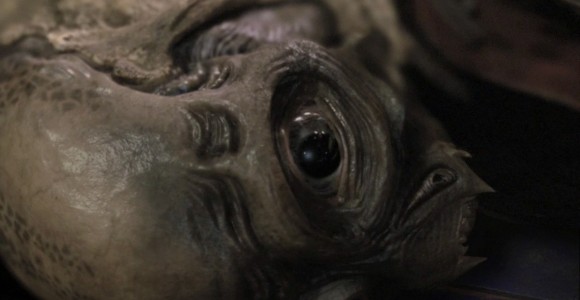 Destiny encounters an Ancient seeder ship, which may hold the key to getting the crew home. But they soon find that the ship is not unoccupied.

On the Observation Deck, Colonel Everett Young, Dr. Nicholas Rush, Eli Wallace, Dr. Lisa Park and Camille Wray watch as Destiny approaches a ship. Destiny does not alter her heading nor slow down. Rush is confident they'll dock rather than collide, but Young orders weapons readied.

The other ship is clearly Ancient in design, and it seems evident that this is one of the seed ships sent ahead of Destiny to place Stargates on planets and to gather data. Destiny slides into a berth clearly designed for her, and the ships automatically exchange data. Rush prepares to join the boarding party, but Young insists he remain behind to translate newly downloaded information.

Rush returns to Destiny's Bridge, a discovery he is still keeping to himself. As he studies the data stream, Gloria points out that the other ship has enough power to dial the Stargate home to Earth. She wonders if Rush will tell the others. But he intends to let them discover this on their own.

On the seed ship, the search party quickly locates a control center. Volker and Brody turn on the consoles, aware that they only have a couple of hours to study the vessel. As Eli monitors the kino's video stream, Rush returns to Destiny's Control Interface Room. He pretends to work while overhearing Colonel David Telford confronting Young. Upset that he's been excluded from the investigation of the seed ship, Telford warns Young that he needs to shape up or step back as mission commander. Reluctantly at first, Young briefs Telford on the situation.

Varro, spokesman for the Lucian Alliance prisoners, asks to see Colonel Young. When Young enters their holding area, Ginn eagerly offers to help with the seed ship. Annoyed that even the prisoners know about the vessel, Young admits to Varro that there is probably nothing they can do that will earn his trust.

Young seeks out Camille, who is working in the hydroponics lab. He doesn't want her treating the prisoners as if they have rights even though they're providing information about the impending Alliance attack on Earth. Frustrated, Wray switches topics, asking if Young will speak at the memorial service for Riley. He agrees.

Returning to the Control Interface Room, Young is greeted with good news. Eli and Park have discovered that energy reserves aboard the seed ship could allow them to dial Earth and get everyone home. To oversee the proper transfer of power from ship to ship, Rush boards the seed vessel.

Scott and Greer, who have been exploring while Brody and Volker work, show Rush the huge hold where Stargates are manufactured. Less than awed, Rush wastes no time and starts for the control room. Brody has gone to fix a malfunctioning relay station one floor up. Alone in the room, Volker hears a noise. He turns around and is shocked to see an alien standing there, watching him. When he speaks to it, it collapses onto the floor.

Informed of the alien presence, Young summons Lt. Tamara Johansen. She has been conducting follow-up exams on the Alliance wounded (including Simeon, who tests his boundaries by aggressively flirting with her). Telford and Airman Dunning escort her to the seed ship's control room. The alien is still unresponsive. When T.J. touches it, it's eyes snap open, startling everyone. With numerous weapons trained on it, the alien sits, mumbling as it pulls its knees to its chest.

Rush suggests that they lower their guns. Scott tries to communicate his name, apparently to no avail. He offers it food, which it spits out in disgust. Rush encourages them to look for others. The scientists continue to transfer the seed ship's power directly to Destiny's Stargate, while Telford, Greer, and Scott head off to continue scouring the ship.

Greer locates at least a dozen pods, indicting there are more aliens aboard the seed ship. Rush speculates that they may be a research team left to study the vessel. Colonel Young orders the science team back to Destiny, but Rush insists on overseeing the power exchange from the seed ship until a stable wormhole is established. With the captive alien, the others head for Destiny.

Destiny's personnel are summoned to the Gate Room. Young has the prisoners brought in as well. The Stargate powers up, and begins to dial Earth. But the energy flow is suddenly interrupted. Eli realizes the power transfer has been reversed, and Destiny's reserves are flowing back to the seed ship. He calls Rush, but gets no answer.

Rush and Dunning have been rendered unconscious by the aliens, who reset the power flow and disappeared again. As T.J. escorts the alien and the scientists back toward the airlock, the alien escapes. Telford, Scott, and Greer go back to rescue Rush and Dunning. Scott and Greer drag the pair to the airlock, where they begin to regain consciousness from the alien stun weapon.

Eli calculates that if they don't stop the power drain, Destiny won't have enough energy reenter F.T.L. flight. Young wants to disconnect the ships, but neither Park nor Eli knows how to make that happen. Young summons Rush to the Control Interface Room, but the now conscious Rush instead goes to the Bridge.

David Telford alone remains on the seed ship. Eli talks him through the computer commands necessary to restore the energy flow to Destiny. With only minutes left before Destiny is powerless, the two ships suddenly disconnect – stranding Telford on the other vessel. Unbeknownst to the others, Rush was unwilling to risk that the Colonel would reverse the power transfer in time, and un-docked the ships to save Destiny.

Telford radios his friend, Everett, and tells him to take care of his people – and himself. Destiny jumps into F.T.L., and his radio crackles with static. The aliens emerge from the hiding place, and surround him.

As life returns to normal on Destiny, T.J. takes blankets and other amenities to the prisoners. Wray and Greer pack Telford's effects. And Colonel Young refills his bottle at Brody's still.

On the Bridge, Gloria asks Rush if he acted to save the crew ... or to save his own dream. Nicholas sits back in the command chair, alone, and closes his eyes.