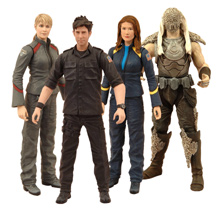 Diamond Select Toys, creators of figurines and action figures for such franchises as Stargate SG-1, Stargate Atlantis, Battlestar Galactica, Transformers, Indiana Jones, Star Wars, Serenity, and many more, recently discussed their plans for the future of the Stargate lines with collectors. Future releases in the SG-1 and Atlantis lines may include Goa’uld System Lord Apophis and Dr. Carson Beckett.

Beckett’s absence from the line has apparently caused some controversy among collectors, as Diamond Select Toys released a figure of Dr. Jennifer Keller in the Series 3 lineup of Atlantis. DST said that “its pretty much impossible to make everyone happy” when selecting which characters to base figures on.

The third series is currently slated for a December 10 release, and will also feature Colonel Samantha Carter, Wraith warrior, and the limited Garrison Uniform John Sheppard. A Ronon Dex figure will also be available as a Diamond Previews catalog exclusive. Each figure will include accessories and a piece of the Ancient control chair from the show, for collectors to assemble.

A new SG-1 two-pack is also listed for release on November 26, featuring the Ori Prior Daniel Jackson from “The Shroud,” and the aged, post-“Unending” Teal’c.

DST also said that it plans to continue producing Stargate figures as long as the lines are profitable. While the recent cancellation of Stargate Atlantis may hurt sales, they plan to move forward, as “SG-1 has always done a little better than Atlantis. I can’t say [the cancellation of Atlantis] won’t affect the toy line — it has to — there will be less new content to do figures from so it has to change our plans, but we’re not going to just stop doing figures. As long as the sales are there, we’ll keep going with both shows.”

The toy company also said they would be open to creating toys based on Stargate Universe, the third television series, set to premiere next summer. But they would wait to see Universe before exploring the possibilities.