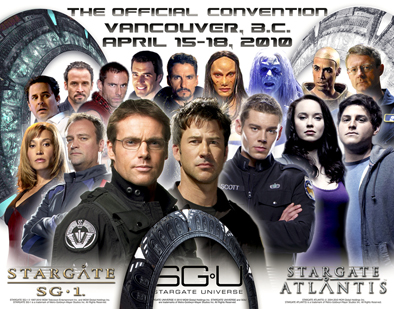 The month of April means different things for different people.  For some, it means the start of a new season and warmer weather.  For others, it means the school year is almost done and the summer will give them time to relax.  But for those heading to beautiful Vancouver, British Columbia this week, April means one of the biggest Stargate fan events of the year!

Creation Entertainment’s Official Stargate Convention in Vancouver runs April 15 to 18 at the Metrotown Hilton, and promises to be (as Vala Mal Doran would say) “packed full of jam.”  While most Creation conventions only last three days, the Vancouver con expands to four days to take advantage of the fact that many actors from all three series still live and work in the city, even if its not on a Stargate-related project anymore.

The convention begins this Thursday in what apparently is being themed as “Goa’uld Day,” as con attendees will be treated to appearances by both Peter Williams (“Apophis”) and Cliff Simon (“Baal”).  Both actors return to Creation after a few years’ absence from the Creation stage.  The day will also feature an appearance by James Bamford, stunt coordinator for Stargate Atlantis and Sanctuary.

Friday will feature appearances by Christopher Heyerdahl (“Todd”, “John Druitt” on Sanctuary), Colin Cunningham (“Major Paul Davis”), Andee Frizzell (“Wraith Queen”) and actor Dan Payne.  Over the course of his career, Payne has portrayed many roles on Stargate, including super soldiers and more.  Friday evening will also feature Creation’s celebrity cabaret with the festivities being hosted by Cunningham and Bamford.

Actor and stuntman extraordinaire Dan Shea (“Sgt. Siler”) will also be at the convention all four days.

Can’t make it to the convention this year?  No problem!  GateWorld will be there, and we’ll keep you updated on any breaking news and updates as they happen!   In addition to the main site, visit Twitter and our new Facebook page (or if you just have to know whats happening right that second, dig a little deeper and find my page) for updates on all the activities this week immediately as they break.

(Thanks to Stephanie and Amy for contributing)

I’ll be there. Say hi when you find me.

really wish i could, but damn got school and no cash to fly from Norway :(

I really wish I wasn’t in school during April… Can’t they push it to May? A guy can wish, eh?

NOOOO! I still have classes to finish!

Wow! What a lineup! It’s times like these that I wish I lived in Vancouver. Have fun, everyone.

@Chad Colvin Any possibility of posting a large-sized image of the Con poster? Please.

Went last year. Loved It. Can’t afford to go this year.No set tours this year? That was the best part.

Someone please ask the actors if ANY know the status of the SGA / SG1 movies? It’s a long shot, but can’t hurt to ask… Thx!

Wish I could go. Most likely will be attending the Chicago convention.

I want this con in europe :D :P but i am from europe and milions fans SG too. SG-1, Michael Shanks, Joe Flanigan, R.D.Anderson …… it´s super!!!!

Why are all the SG conventions in Canada. I live in California and there has NEVER been a convention within a hundred miles from my home.

Jim – there is an official Stargate convention in Burbank every year: